You're not afraid of the dark, are you? 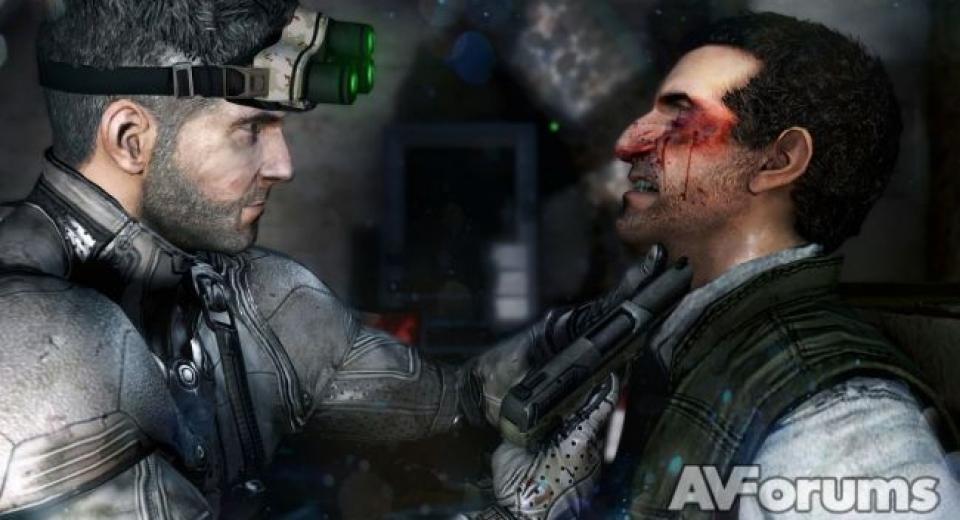 The old fashioned stealth game has had a tough time of it recently, on one hand sneaking through the darkness and conducting free neck surgery and escaping without a sound is incredibly satisfying, however the mainstream lean towards all out action means that games that require such subtle tactics often ironically go unnoticed. If there was a stealth franchise that could possibly buck this trend one might argue that Splinter Cell would certainly be it.

Sam Fisher is synonymous with stealth, his tri-lensed goggles and the accompanying whine are as iconic as they come. 2010's Conviction moved away from that incarnation of Fisher, with a more action focused, gritty and accessible version of the series' core elements. Splinter Cell: Blacklist pulls back a little from Sam's last outing but it's certainly no Pandora Tomorrow.

Blacklist is your classic terrorist tale of a by-any-means necessary team stopping as many timers as possible at 00:01. A terrorist organisation known as "The Engineers" blows up a military base, declares war on America and brazenly sets out a timetable (or "Blacklist" if you will) of subsequent attacks which will be executed unless all their demands are met. After barely surviving the attack Sam is enlisted by the President to form "The Fourth Echelon" which is tasked with neutralising this new threat.

Your team is a handy collection of operatives with all the right skills, "Grim" the sassy manager who has a turbulent relationship with our protagonist, Charlie the wise cracking, socially awkward computer genius and Briggs the other guy they added so it wouldn't be weird having two Sam Fishers in co-op. You are all bundled into the flying fortress known as "Paladin" which acts as your base of operations.

In between missions you can wander round the plane and speak to each member of the crew for a little story dressing and access to a multitude of options. Grim presents you various ways to enhance your digs, improving the medical bay grants you greater health and upgrading he cockpit increases the effectiveness of your radar in missions, whilst Charlie holds the keys to the armoury where you can customise your loadout completely. Weapons, suits, gadgets and even the colours of those famous headlights can be customised for the right price. Briggs knows his role and offers up a series of co-op missions which can also be accessed via the SMI. The SMI or Strategic Mission Interface is the large Microsoft Surface like (kudos on resisting the obvious marketing synergy there Ubisoft) table you go to when you're ready to take on a mission. From here you can choose to advance the story, take on a co-op mission, see what your friends are up to and access multiplayer. It's a nifty implementation of what would normally be a pretty dry set of menus and it fits into the environment of the Paladin nicely, some of the load times are a little lengthy between screens but overall its an enjoyable interface.

Choice pervades almost every aspect of Blacklist, as the customisation options and the post-mission report screens emphasise there are 3 clear ways to inhabit the role of Mr Fisher. Ghost is vanilla Splinter Cell, if you do it properly no one even knows you were there, shimmying along drain pipes, watching guard patterns and peeking under doors are the order of the day. You will probably equip Sam with some light and sneaky armour with extra pockets for all the gadgets you will need. Assault is the polar opposite; while probably utilising the "Bash Open" prompt on every door that presents it, you will equip an un-silenced assault rifle or shotgun, frags and a heavily armoured suit to help deliver the sweet taste of freedom directly to each enemy's face.

Panther splits the difference and is my personal favourite, stealthy but deadly. You will use the shadows and gadgets to quietly move through the environment undetected, but the cleaner had better have something good for getting blood out of the carpets.

The structure of the missions struggles to focus on one particular audience and is at the heart of Blacklist's dilemma. While trying to open the game up to the average "pop and drop" gamer, Ubisoft have ended up with an uneven experience with only brief glimpses of the series' quintessentially satisfying stealth gameplay. There is an addictive coolness to slowly padding around a level, navigating the guards, cameras and dogs, only killing when necessary and hiding the bodies to keep your presence hidden. Gadgets like the sticky camera, which allows you to look round corners, or the airborne Tri rotor give you the advantage when the odds are stacked against you. The problem is there is always an easy out. Stealth games are by their nature frustrating, 15 minutes of skulking about can and will be erased by a psychic dog or an eagle-eyed sniper, and after several attempts the option of just pulling out your silenced sniper rifle and clearing the area becomes very attractive. Granted this is equally an issue of player self control as it is design; however in a moment of frustration it's easy to press the "win button" of the Assault play style to simply move on. As soon as you succumb though you feel dirty, as if you are not doing it properly and vow to play the next section Ghost, but as the game wears on the gameplay seems intent on forcing your hand. Where the developers do insist on setting stealthy parameters such as zero detection or no fatalities you find yourself perking up and rising to the challenge the game has suddenly presented, unfortunately these moments are rare and fleeting.

Many of the missions are book ended by an action sequence where you are forced into combat, either you have to escort someone out under fire (everything is exploding around you for some reason), or you're pushed into a corner and surrounded by enemies. It's this constant need to pacify the hunger for all out action which brings the game down. Environments have handy chest high walls dotted around to accommodate fire fights, the campaign is punctuated with "Death From Above" interludes where you rain destruction down from the safety of the Paladin, and there is even some first person action thrown in for good measure.

The Sam who watches 24 on loop makes his return, sans Michael Ironside but with equally loose morals. The environment wrecking interrogation sequences are removed in favour of some simple kill or spare choices. The entire game promises to allow you to play through without killing anyone, giving you the option of using non lethal takedowns and non lethal weapons, the results remain the same leaving you with a lifeless body you must either hide or hope no one discovers. This violent version of Sam isn't offensive but for someone playing through in a Ghost play style it's just inconsistent. Dynamic cut-scenes which changed tack depending on your play style might have been a nice touch, with a more broody cerebral Sam reflecting your path through the level until that point.

Instead it's left to the standard mission end screen to inform you which of the three styles you aligned most closely with, awarding points for pretty much everything, with only a slightly weighted increase to toward Ghost, indicating that the preferred method is perhaps somewhere below genocide. Either way you reap points which turns into cash that allows you to splash out on the appropriate upgrades and gear which enhance your particular brand of spy game.

Co-operative multiplayer exists, with the characters from the campaign each offering up side activities that can be played co-op online. It also suffers from the same bipolar distribution of gameplay, some require complete stealth, some break down into wave based combat, and others are simply mini campaigns which allows you to once again pick your play style. It is nevertheless fun working through levels in tandem, with a like-minded partner you can really use all of the stealth elements to your advantage or simply double up on firepower. Spies vs Mercs mode in multiplayer does a much better job of dividing the gameplay. In the updated Blacklist mode there are now two teams of four, one side plays as the sneaky spies in the third person and the other team reverts to stand first person to play as the Mercs. The spies must hack terminals, staying in close proximity to the target in order for the slow process to complete. The mercenaries have superior firepower but are far less manoeuvrable. What ensues is a great game of hide and seek which gives rise to all sorts of strategies and team work. The spies must work together to distract and disorientate the mercs whilst achieving their objectives, and the mercs must be at the top of their game to catch the enemy who is usually much closer than they think.

The customisation from the single-player bleeds through here touting an eyebrow raising 540 load out combinations, outside the standard classes you can create exactly the spy or merc you desire. Every ying has its yang with Spies able to equip the ability to cloak but the Mercs being able to counter with disrupter tech which makes them visible again, both sides have skills available which can mark enemies. The spies can enable sonar and the mercs can equip tech to disrupt it, on and on it goes. It certainly provides a lot to work towards as you earn currency and unlock new equipment and abilities to create the perfect operative.

It can get a little hectic with the increased player count and the multitude of options; with so many options it's rare that the balance planned from a grand game design perspective actually plays out in real matches, players will be over powered in some areas and at a disadvantage in others. Who ends up on top can sometimes equate to rolling the dice. Luckily a classic mode exists which strips it back to 2 vs 2 and removes all the wild customizations of the Blacklist variation, taking it back to its enjoyable core where tactics and tension are at their highest.

There are a handful of other modes available but they aren't worth exploring; if you're here to play Splinter Cell: Blacklist Team Death match, then you're doing it wrong. "Let vigilance be our sword". That was Third Echelon's original motto; specialising in "covert information gathering through physical infiltration". Changing the name of the organisation to "Fourth Echelon" is a telling amendment. When Blacklist sticks to the the original mantra it exceeds at making you feel powerful and intelligent for manipulating the AI and navigating the puzzle-like web of obstacles. It is less successful when trying to replicate an action blockbuster, simply giving the option to "go loud" not only compromises what makes the game great but more often than not it actively damages it. The out-of-the-box story and mundane characters do little to elevate the game's campaign, which frequently offers small snippets of promising stealth gameplay but falls back on its action tropes way too often. Spies vs Mercs goes a long way towards improving the package, with the asymmetrical gameplay proving as fun as ever, if a little over developed in its revamped incarnation.

Splinter Cell: Blacklist wants to be a stealth title; but only if you want it to be one, and even then not really. Which is a pity because hiding somewhere amongst all the explosions, assault rifles and grenades is a game which is far better than average. If you're willing to put in the effort you might just find it.