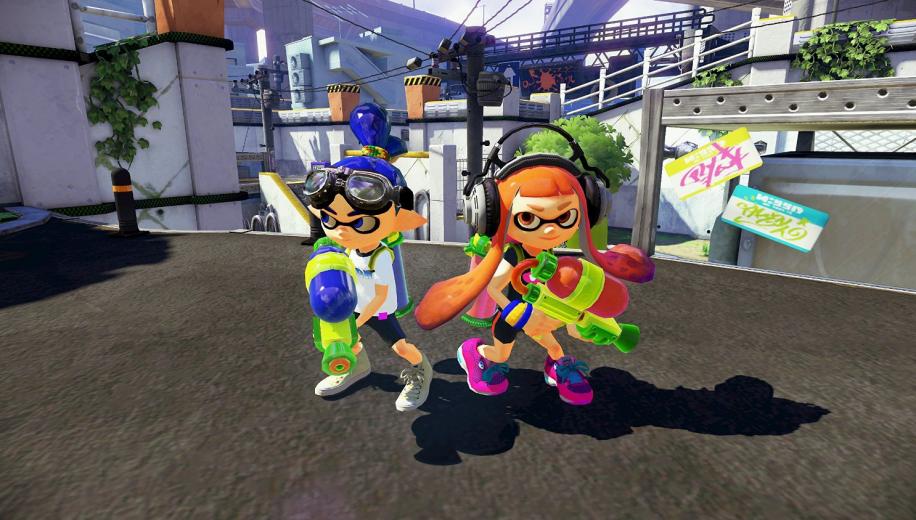 Nintendo offer their own take on the competitive online shooter.

The Wii U may be flagging, but it’s slowly accumulated a decent roster of first party exclusives. However, one genre has been conspicuous by its absence, and it’s the one that seems the least Nintendo, namely the online shooter.

Nintendo’s attitude to both gun-centric gameplay and modernising with online multiplayer has been either old fashioned or unique, depending on your view of the company. With Splatoon, they show how a little ingenuity can bring a fresh twist to a tired genre, as James found when he first saw it at Gamescom last year.
The twist being that in Splatoon there’s an ink-based theme, with weapons that fire it, bombs that explode it, and you descend into the inky pools covering the floor to swim through it. Your team can move through your own and need it to reload, whilst your enemies' will inflict damage and render you immobile.

The aim of the game’s main Turf War mode (which you’ll spend most of your time playing) is to cover the stage in your team’s colour, resulting in the sort of chaotic painting spree that resembles 60 Minute Makeover on fast forward. The arenas are mainly fairly small (in comparison to more military-based shooters) tight affairs, where the two sides of four battle for the territory to ink. The fact that opponents are actually a byproduct of what you’re aiming to do gives the game a pretty unique learning curve, and a freshness that’s only apparent when you play it.

Looking at pictures it seems like a standard colourful Nintendo-like take on themes existing elsewhere, but once you pick up the GamePad and invest a few hours you realise that it’s a game that intentionally splits your priorities, gets you thinking about map traversal, and forces you to work as a team far more than your average, more po-faced titles that pay lip service to the necessity of co-operation.


A freshness that’s only apparent when you play it

Certain maps have high ground, which can be taken for some easy kills, but this isn’t a game where kills streaks count, and in Kelp Dome for instance, two players dominating the centre of the map might make them feel godly, but it means there are peripheries which will be easily inked by opponents, and your team will fail. It’s a balancing act, where the ability to instantly super jump from the spawn point to a location of one of your team mates has to be used carefully. Pushing back the opposition is great, but one player who slips through your lines with a Splat Roller can cover serious ground in short time. That balancing act extends to the basic mechanic of shooting too. You need to keep one eye on what you’re inking, and one on where an opponent might emerge from, and it's all too easy to get drawn into focussing on one over the other.

The symmetry of the maps makes for easy acclimatisation, where strategies are soon found. However, the variety of weaponry and perks means that as you level up you’ll uncover more ploys to either spread ink or splat your enemies. You have your obvious buffs, like improved defence or lower ink consumption, but it’s things like the Ninja Squid ability that really spice things up. That perk allows the user to swim through the ink without leaving a trace, meaning that if you miss with your first shot you’d better get lucky with the ground you ink to stop them popping up too close to you.

The weaponry predominantly takes on your standard archetypes - like sub-machine gun, heavy calibre and sniper rifle - but there are a few more interesting variants (and hopefully more to come via updates), such as the Inkbrush which flicks from side-to-side, and the Splat Roller, which covers a lot of ground but lacks range when firing. To complete the loadout you also have Sub weapons and Specials which are unleashed when enough ground has been inked to charge them. The bombs are an easy secondary for pick up and play but there are nice additions like the Splash Wall, which places a vertical downward sprayer like a wall through which opponents can't pass; particularly handy if you’re being pursued in a tight location.

Even though the games are a short three minutes, they can shift quickly, with the upper hand changing depending on good strategy. This, for once, makes excellent use of the GamePad. The map displays on the screen, showing real time ink coverage from both sides, so it’s a great way to keep abreast of the front lines.

The touch screen feature comes in handy too, as it’s used to prod at the location of a team mate when you want to Super Jump to their location, or unleash an Inkstrike special. There’s also the ability to use the motion control of the GamePad to aim, which is a fine art that - once mastered - should give you an advantage over those of us luddites who turn it off. So, it all sound excellent right? Well, it’s certainly refreshing and lends itself to short bursts wonderfully, but perhaps unsurprisingly for a genre that Nintendo have scant experience in, there are a few little flies in that inky ointment.

Firstly, there’s a suspicion that Nintendo’s matchmaking metrics may not be particularly insightful. It’s always tough gauging skill when levels are dependant on time played - and we all know top gear doesn’t equate to proficiency with it - but routinely in the early levels I was paired with numerous level 20s (the cap, at the moment) sporting the type of weaponry and multi-perk clothing I could only dream of.

You unlocked a Ranked mode at level 10 which remedies this somewhat, but with the winner takes all mantra it strips away some of the light-hearted fun of the standard Turf War mode, though the Splat Zones king of the hill style gameplay - where teams must hold areas - is a welcome addition of variety. The fact that there are only two modes, and the maps are rotated in small numbers means it has to be played in short bursts.


There are a few little flies in that inky ointment

There are also some other fine points of the genre that are missed, such as being able to adjust your loadout between rounds. It doesn’t take long to jump back to the central hub of the game and switch things around, but given this is a game that encourages you to experiment and have fun, it’d be nice to spend the thumb-twiddling moments waiting for players by browsing your kit.

You can play a mini-game on the GamePad while you wait, but it soon gets stale. Luckily that downtime is extremely minimal, as most games start within about 20 seconds, although the reason it’s so fast is because the players are gathered from all corners of the globe, which more seasoned competitive multiplayer players might sniff at.

Single Player to the rescue!

The real upshot to the odd rough edge to the multiplayer is that the time spent on the game has clearly been invested elsewhere as well, namely the single player mode.

Far from an add on - the kind that's an afterthought on most titles designed around multiplayer - Splatoon's single player offering is surprisingly robust. The core shooting is simplistic, but it has layers of platforming and combat that get progressively more fulfilling.

It’s almost as if this side of the game was the original concept, and the multiplayer sprang from that. It’s far more conventional, with combat against AI requiring some run and gun, but the platform sections are well thought out. With the spraying mechanic it has that air of Mario Sunshine in places (I mean that as a compliment, as I really liked the game), with some nicely hidden titbits to find and its own basic gear levelling system which helps to make those extra runs to find the secrets more palatable.

You missed a spot

Splatoon is inventive and unique, bearing all the hallmarks of a Nintendo twist on an established genre. It’s easy to get into, has that pick-up-and-play appeal, and some satisfying depth once you get on the treadmill of levelling and experimenting with different equipment.

It still feels slightly embryonic though, as the repetition of maps, paucity of game modes and general lack of the finer details makes it a bit clunky, but even with rough edges it's a perfect +1 game to have in your collection; you won't play it endlessly, but you'd miss it if it weren't there. Luckily more updates are coming, and the single player campaign works as a great breather, changing the pace of combat and re-energising you for the next round of competitive ink-based carnage.

It’s a game that places fun above the seriousness of competition, and in doing so justifies its often stripped back approach, but it still manages to instil that competitive air in the same way Mario Kart has for decades, having you laughing through gritted teeth even when beaten.