“It’s their fate. You can’t change that anymore than you can change who they are.” 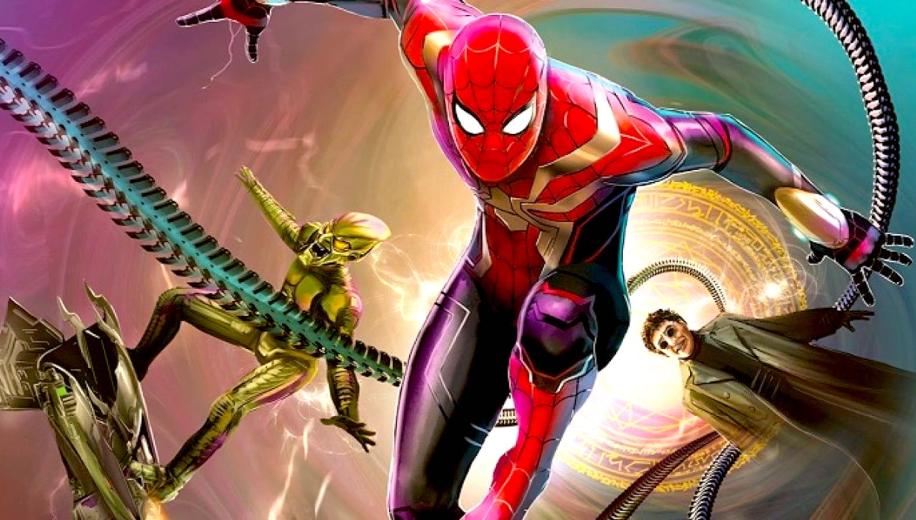 Like a live action Into the Spider-Verse, No Way Home blows the doors open to the multiverse and ties up over two decades of Spidey adventures.

Marvel's Phase 4 has had a bit of a rocky time of it recently - not unlike the entire population of the earth - not quite finding its mojo despite some promising TV shows, and despite the potential of the Big Screen affairs it has had to quickly slap on Disney+. But it closed off 2021 on a high, with the double-whammy of one of its best small screen outings, Hawkeye, and its best Big Screen efforts since Endgame, this intoxicatingly inclusive entry-point into the multiverse, which makes good on so much Spidey mayhem over the last twenty years, bringing familiar villains - and familiar heroes - back to the fore, righting past wrongs, and wrapping it all up in a surprisingly emotional spectacle.

If Homecoming was about Spidey finding his footing in the early Avengers days, and Far From Home was about him finding his own place in a world without his mentor, No Way Home completes this trilogy by at first unleashing all things Spidey - including his identity - and then tearing his whole world down, from tech to teammates. It's an interesting gambit, undoubtedly partly born by a desire from Sony to form their own "Spider-Man Cinematic Universe" replete with tangential properties: Venom sequels nobody wants, a Morbius movie nobody wants, a Madame Web movie, a Kraven the Hunter movie, and even a Silk TV series. During production of No Way Home, things became quite difficult between Sony and Disney, and it will be interesting to see how their newfound 'friendship' and desire to do a second Tom Holland Spider-Man trilogy will inform the future MCU and the future Spider-Man Cinematic Universe.

... these are characters nobody ever expected to hear from again, at least not like this, and for one single film to do them all justice is, well, something special

In the meantime though, No Way Home handles the past, present and future perfectly. It juggles a first act of mania following the reveal of Spider-Man's true identity, with superb aplomb, infusing comic energy into the brewing sense of desperation (the surprise cameo paralleling the similar reveal in Hawkeye wonderfully, showing the first of a succession of hints as to the boundless future of these universes), before embarking on the 'verse-shattering events that lead to an influx of old, familiar faces, on both sides of the chessboard. Given the nature of the trailer, poster, and home media artwork, there's very little here that's much of a surprise anymore, but it's perhaps less about the surprise of the appearance of old heroes and villains, and more about what No Way Home does with them, that really matters.

Almost all of the rights - and wrongs - of previous Spider-Man entries are revisited here, tying up loose ends that audiences likely figured would never be closed, whether in the maligning of core villains, or lack of closure for previous web-slingers. Molena is obviously a standout, and Maguire the nicest familiar face (whilst Foxx has all the best lines, Dafoe gets to go full tilt, and Church rights a few wrongs), but it's Garfield who steals the show on the emotional front, really giving us a touching and moving side to the narrative which almost has more impact than some of the main arc's core shocks (of which, there are also plenty). These are characters nobody ever expected to hear from again, at least not like this, and for one single film to do them all justice (Lizard notwithstanding) is, well, something special.

Holland's still a fabulous lead, and Zendaya a reluctantly fun foil, with Marisa Tomei finally enjoying her moment of glory, and really the whole ensemble cast get just the right amount of screen time - just the right amount of character development, tragedy, and emotional impact - with only Cumberbatch's Dr. Strange being possibly a little uncharacteristically frivolous in his manner, given some of the things we've previously seen this character do, particularly in Infinity War. It's as good a live-action Spider-Man: Into the Spider-Verse as anybody could have possibly hoped for, all the better too for telling its own story, making for a wonderful introduction to the multiverse of possibilities that Marvel is obviously going to go mad on shortly with the new Dr. Strange movie. It is... spectacular.

... it will wow you as one of the best looking films, and 4K releases, of the year

No Way Home is a big, bright, glossy Marvel blockbuster, and boy does it look fabulous in 4K. Nobody is really going to be surprised by this vibrant, detailed, amazing presentation - it's par for the course now - but it will still wow you as one of the best looking films, and 4K releases, of the year. The opening swings around the city, shot reverse POV with that camcorder vibe, really draw you into the frenetic, kinetic mayhem, trying to induce a little vertigo as you dip and dive through the skyscraper-infested landscape. The spell-casting ignites the screen with energy, but it's really at the bridge where things kick up a gear; the first of a succession of demo sequences to show off your equipment with, near-faultless CG integrated into some wonderful landscape of epic action.

Detail is excellent, with some of the daylight close-ups looking absolutely tremendous, whilst clothing and hair reveal fabulous textures, as do environmental and background nuances. Sure, it's a digitally shot and thus a very clean, some might argue, very digital-looking production - detail excellent on close-up, but faces slick at middle range - but that's just the style of the piece. Hopefully nobody expected this to look like Robocop 4K.

Of course WCG and HDR (here with Dolby Vision too) take it to the next level though, with a fabulously rich comic book scheme, boasting vivid and vibrant tones across the board, healthy skin tones and lovely little flourishes (Strange's frozen kingdom with some golden lights breaking up the landscape, the pops of shiny excellence on the Iron Spider suit, the luminous greens that Goblin's tech enjoy, Strange's magic, and the "electric' blues and yellows), with very deep and inky blacks to round out the piece and gift it outstanding shadows.

From the opening scene, trying straight into the last chapter, No Way Home goes for wild abandon with its propulsive energy, and the score and effects beautifully come together to bring that into your living room, affording a wonderful intensity and thunderous impact which makes all those afore-referenced demo sequences hit home, hard.

Dialogue is rendered with precision throughout, largely emanating from across the frontal array, but it's those effects that wow, with an absolute thunder to the earlier freeway clash, booming underfoot. The electric blasts tear across the screen with palpable energy, rumbling Sandman devastation threatens the very foundations of your house, and Strange's frequent all-round magic effects utterly draw you into the chaos. The score hits you right from the outset, thrumming along and cresting this whole wonderful package with that cherry on top; it's all-round excellent, demo perfection from top to bottom - absolutely spectacular.

Sony's 4K release of Spider-Man: No Way Home comes with a bare-bones 4K disc, as well as a whole array of extra material spread across its accompanying Blu-ray.

... a whole array of extra material

Spider-Man: No Way Home is easily one of the best blockbusters of 2021, and the best MCU movie since the heady days of Endgame, kicking the doors open to the world of possibilities afforded by the multiverse whilst also tying up a dozen Spider-Man appearances over the last two decade into one - impossibly - cohesive whole, brimming with laugh-out-loud fun, thunderous action, emotional impact, and, perhaps most surprisingly, closure for three very different Spider-Man universes. And hope too, that this may not actually be the end for them either.

... the best MCU movie since the heady days of Endgame

Sony's 4K release of Spider-Man: No Way Home is unsurprisingly outstanding, boasting demo video and audio, and a solid array of extra material, leaving it a must-have purchase for fans.