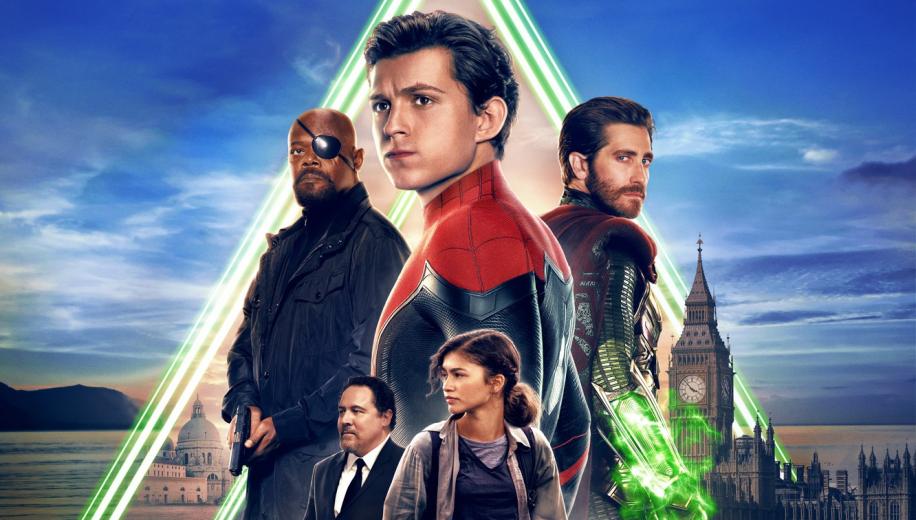 Looking back 22 films, all the way to the conclusion of the very first entry with the revelation that was "I am Iron Man", it seems odd that Marvel would think that there was any more fitting conclusion to Phase 3, and indeed the entire first three phases of the MCU, than the climax of Avengers: Endgame.

Yet, even before that film has finished its Box Office run (and arguably contributing towards its difficulty surpassing Avatar) we get the next entry, purporting to be the real end to Phase 3. It definitely feels like an afterthought statement, given that it was always assumed to be the start of the next Phase, and that sometimes comes across in this slightly indulgently long epilogue, which is at its best when it's just a breezy teen romance road trip, but which struggles not only because it comes so closely in the wake of one of the most momentous cinematic events in history, but also because it comes after the underdog contender for the best Spider-Man movie of all time: Spider-Man: Into the Spider-Verse.

In the aftermath of Thanos, the 5 year 'blip' and all the fallout, Peter Parker - devastated at the loss of his mentor, which he is reminded of at every turn - is looking forward to a European school trip with all of his classmates, escaping from the craziness for a moment, and investing his focus on a possible romance with MJ instead. But after a brand new threat appears - and a brand new mystery hero to tackle it - Peter has to wrestle with returning to hero duties so soon, or just taking a break for a while and being a teenager for once. Far From Home is everything Marvel fans needed after Endgame, but arguably not this soon. A couple more months and, as the launch of another Phase, it would have been the perfect lighter, funnier and more frivolous antidote - exactly what the likes of the Guardians and Ant-Man movies have been used for after game-changers like Winter Soldier, Civil War and Infinity War.

Similarly, Holland may be getting a little old to be a convincing teenager, but he makes up for it with earnest commitment and is gifted a decent inner Spider Tingle arc here (although it's not a patch on Spider-Verse though), and Gyllenhaal goes broad for his suitably enigmatic and mysterious Mysterio, whose multi-dimensional blah origins will either leave you smirking or rolling your eyes, but whose gifts at least make for some wonderful fantasy moments that blend up the best Inception-esque elements of Doctor Strange and offer the absolute high points in this entire 129 minute journey (and, sorry, there's no skipping the end credits here - after the final words roll there's a stinger which changes the entire dynamic of some of the key characters).

Far From Home isn't exactly showing the cracks in the MCU beast. It's a LOT of light, frivolous fun, almost like an old Spider-Man cartoon episode come to life as a wonderfully fantastical Big Screen event. At its worst, it's familiar, playing up misdirections which have been used before, throwing up threats that don't quite have the required impact, and covering up cracks with comedy, but these are arguably its positives too, counterpointing the threat-to-end-all-threats in Endgame with the only threat that could really come next, offering up familiar fun, reminding you of just how entertaining the MCU can be even at its breezy best, and reminding you of how funny this universe can be when it lets its hair down.

If there were half marks, it would easily earn a 7.5, and the only reason it doesn't get rounded up is because it feels like it came just that little bit soon. This would happily make for the start of a new Phase, and certainly, come the end of it, it hardly feels like anything is over with this movie or any of the others.