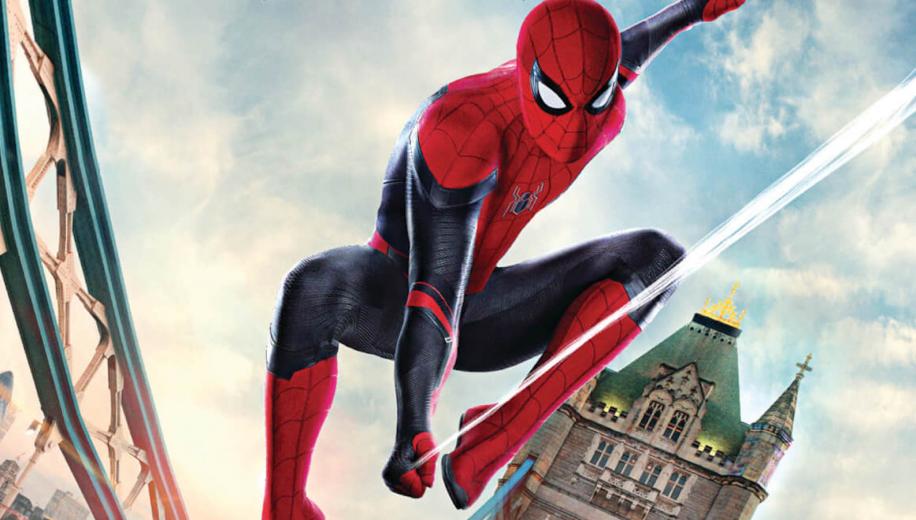 Far From Home was everything Marvel fans needed after Endgame, but it landed a little too soon, making a home cinema revisit considerably more pleasurable, and leaving it the perfect lighter, funnier and more frivolous antidote to the all-out war that came before - exactly what the likes of the Guardians and Ant-Man movies have been used for after game-changers like Winter Soldier, Civil War and Infinity War.

Similarly, Holland may be getting a little old to be a convincing teenager, but he makes up for it with earnest commitment and is gifted a decent inner Spider Tingle arc here (although it's not a patch on Spider-Verse though), and Gyllenhaal goes broad for his suitably enigmatic and mysterious Mysterio, whose multi-dimensional blah origins will either leave you smirking or rolling your eyes, but whose gifts at least make for some wonderful fantasy moments that blend up the best Inception-esque elements of Doctor Strange and offer the absolute high points in this entire 129 minute journey.

Far From Home isn't exactly showing the cracks in the MCU beast. It's a LOT of light, frivolous fun, almost like an old Spider-Man cartoon episode come to life as a wonderfully fantastical blockbuster event. At its worst, it's familiar, playing up misdirections which have been used before, throwing up threats that don't quite have the required impact, and covering up cracks with comedy, but these are arguably its positives too, counterpointing the threat-to-end-all-threats in Endgame with the only threat that could really come next, offering up familiar fun, reminding you of just how entertaining the MCU can be even at its breezy best, and just how funny this universe can be when it lets its hair down. It was always hovering around a 7.5, but coming so soon after Endgame theatrically, it fell down on that score; after a few months' to breathe, it earns a fun bump up.


Spider-Man: Far from Home hits UK 4K Ultra HD Blu-ray courtesy of Sony, who serve up likely the exact same spectacular disc that hit US shores a few weeks back, complete with an unsurprisingly spectacular Dolby Vision-enhanced presentation that comfortably defies the ostensible technical limitations of its 2K upscale.


WCG, HDR and Dolby Vision all come together wondrously

Far From Home looks utterly spectacular, afforded impressive clarity throughout, with fine object detail and welcome texturing pushing a modest but still evident uptick over the SDR 1080p Blu-ray counterpart. It's a glossy, picture-perfect image, commensurate to both the MCU and Sony's high standards.

WCG, HDR and Dolby Vision all come together wondrously to provide some stunning tones, booming flames that blossom out with intense yellows, oranges and peaks whites - the nighttime carnival / fire elemental sequence is a highlight, brimming with neon Ghostbuster greens courtesy of Mysterio, whose suit alone is popping with vibrant snappy colours, and of course the 'nightmare sequences' are amazing too. It's a rich and visually opulent palette, enjoying the Euro-trip locations; the blue skies and lavish architecture, as well as the stunning visual effects, with healthy skin tones and solid blacks providing a fabulous backdrop.

The Atmos track comes packing a punch
The accompanying Atmos track comes packing a punch right from the outset, with the rock beast intro booming through your living room, whilst later setpieces continue to threaten to shake your foundations, tearing up the streets and leaving buildings toppling down on top of you. Dialogue remains firmly prioritised throughout, gaining extra dimension through elements like EDITH, whilst the score keeps things energised and chirpy, playing to the warm 80s comedy antics of the Euro-trip but also coming alive during the action sequences and nightmare scenes. There's plenty of dynamic weight here and LFE input.

The 4K Blu-ray release of Spider-Man: Far from Home doesn't sport any supplementals itself, but the accompanying Blu-ray boasts a decent selection of extra features, the highlights of which include Peter's Short Film, a Gag Reel and a few minutes of Deleted Scenes, and then about a dozen short Featurettes and some Trailers.


Familiar fun, reminding you of just how entertaining the MCU can be even at its breezy best, and just how funny this universe can be when it lets its hair down
Spider-Man: Far from Home could have done without riding so closely on the coattails of the game-changing Endgame, and perhaps would have worked better as a kick-start to the next Phase, but given a few month's gap, a home cinema revisit proves a whole lot of fun, reminding you just how important this character is to the continuing MCU. Sony's 4K Ultra HD Blu-ray looks unsurprisingly spectacular, with Dolby Vision the cherry on top, and the Atmos accompaniment does a great job too, with a nice selection of extras rounding out a very good release indeed, which comes highly recommended to fans of the film and the larger MCU series.