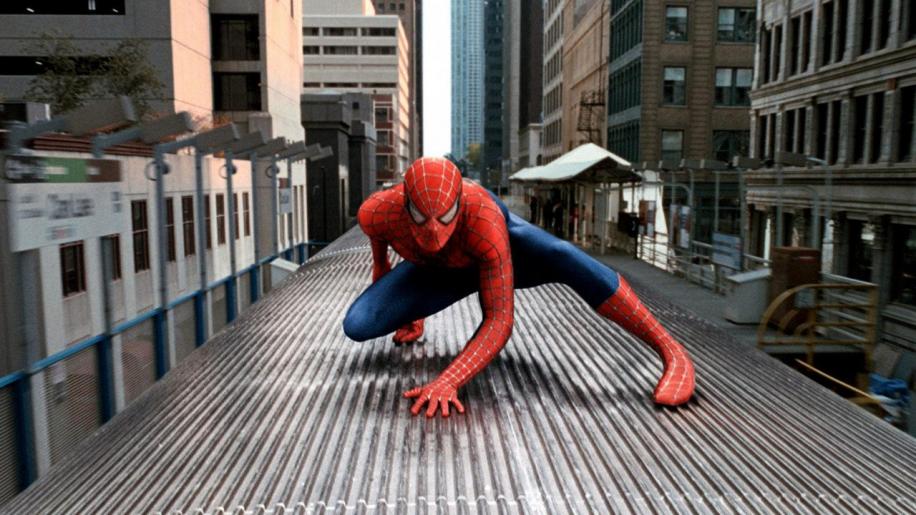 I was looking forward to assessing picture quality with this Special Edition. The first DVD release was a little uninspiring really, and things have moved on a little since then. I've also got the Superbit Edition to review, so this should make for some interesting comparisons.

It quickly became clear that Spider-Man 2: Special Edition is a DVD that will show up any deficiencies in any monitor that has been less than accurately set up. Here's why - Raimi takes us from Peter Parker's Uni Campus with lush green grass areas, to a full screen head shot of Parker talking to his teacher. Skin tones now become the focus of attention in an outdoor scene that is bright and sunny. The next scene sees Parker riding his moped along a darkly lit road as he heads towards Aunt May's house. The interior scenes here are deliberately yellowed to give the feeling of a basic lifestyle, as well as the use of incandescent light bulbs. We're then taken to another outdoor night scene, where Parker chats with Mary J whose fair skin and ginger hair take on special prominence. Each of these scenes has clearly been painstakingly researched and filmed, and if your colour settings especially aren't quite right one or more of them, as well as many others, will not look as intended. But even if you have everything set perfectly, Spider-Man 2 sometimes highlights a few problematic areas. Some darker scenes (like at the beginning of chapter 17 - the front of the hospital) are marred by a touch of video noise and there is clear, and sometimes off putting, use of edge enhancement - take a look at the scene where Parker walks between two houses as he arrives at aunt May's place in chapter 35 at 1:21:20. There's also a box with the words “Municipal Records Centre” written on I, which appear blurry and almost out of focus to the degree of illegibility. It will be interesting to compare these scenes with the Superbit Edition... watch this space! There are also times when the image is quite outstanding - take a look at screen grab number two, taken at 0:49:47. Want to see what your monitor is capable of? Count the pores in Doc Ock's skin! The herringbone pattern on his collar is also a good guide to resolution, with the dark and light stripes being clearly identifiable. Again, it will be interesting to see how the Superbit version compares.

Overall, the 2 disc Special Edition has a solid, if slightly flawed video presentation on DVD. It is good, and provides a real test for your AV equipment, but it lacks a certain pizzazz and clarity that is achieved by the very best transfers - despite being “Mastered in High Definition”. A lot of the movie looks good, and some of the movie looks great. Problem is some scenes are quite poor considering the budget and scale of the movie. Close, but no cigar for image quality on the Special Edition... will the Superbit release fare better?

With a Dolby Digital 5.1 (448Kbps) track (if you want DTS you have no choice but to go for the Superbit Edition, which means losing out on the extras available here), Spider-Man 2 has an excellent and dynamic full surround sound that is truly involving in the best comic book action movie sense. Bullets zip around your head with dizzying scale and authority, and Doc Ock, in particular, sounds suitably menacing as his newly grafted appendages crunch through brick and concrete. The thing is, as I write this review I have now watched the Superbit version so I know how things compare in DTS. I was impressed with this offering... to a point. When I start to feel a little “bombarded” with sound, as though I'm listening at too high a volume, I begin to suspect that either the audio track is lacking in some way - or I'm listening at too high a volume. Suffice to say I didn't have the volume up too high, so I'm left with the feeling that the soundtrack has that lack of overall quality that would make it really stand out. Perhaps I'm being a little harsh, or perhaps it is the soundtrack that's a little harsh - either way, although not quite up to demo quality Spider-Man 2 has a solid Dolby Digital outing. The car chase scene where PP chats to a couple of kids is a good case in point - we have bullets ricocheting, car bodywork crunching and Spidey doing his thing. Good stuff... but how will it compare to the Superbit's DTS track? Hmmm.

The DVD case boasts of “2 Discs with over 10 Hours of Exclusive Content”, so if extras are your thing you'll have no choice but to go for this Special Edition - as usual the Superbit version comes with zero supplemental features.

First up are the two audio commentaries, one with director Sam Raimi, Spidey himself Toby Maguire, Producer Avi Arad and co-producer Grant Curtis, and a second “Technical Commentary” with tech bods Steve Johnson and Eric Hayden. Raimi and Arad teamed up for Daredevil and I really enjoyed their commentary for that movie. For some reason this is a much dryer affair that really didn't do much for me. It's informative and fairly interesting, but just a trifle... boring? If you want to know when Alfred Molina was playing Doc Ock and when he was replaced by a puppet or computer generated, then the second commentary is for you. Personally I found it too “Wow, look what we did here”, and “Can you believe how great that looks?” for my tastes.

Spidey Sense 2 is like the Follow The White Rabbit feature from The Matrix - turn it on and as you watch the movie factoids and trivia will appear in real time. For this review I didn't watch the whole movie with it turned on... but one day I will!

Wow - Web-I-Sodes are a group of very short, but oh so sweet mini featurettes (altogether they last some nine minutes) concerning Costume Design, Comic-Con Q + A, J. Jonah Jameson, and Peter Parker and Mary Jane Watson. Why has this been done? I have no idea!

Without a doubt the Bloopers offer some genuinely funny moments from the filming of Spidey 2 - I could watch a whole two hours of this stuff! Rounding off disc one are a few previews of other movie and DVD releases. On to disc 2 then...

Making The Amazing is a group of twelve features that you can choose to watch individually or all together, and at over two hours long there is as much info about the making of Spider-Man 2 as you could wish for. This is followed by three featurettes totalling approximately fifty-two minutes of further insight and information about cast, crew and Spider-Man. Rounding out the extra features on disc 2 are some original paintings taken from the opening sequence of shots from the movie, and finally some interactive content linking to Activision's Spider-Man 2 game, as well as press reviews for Spidey 2, content for your mobile phone, web of words online game and the all-important Countdown To Spider-Man 3!!

Spider-Man 2 is an excellent sequel that in my opinion surpasses the original. This 2 disc Special Edition comes with reasonably good picture quality, fine audio and enough extras to keep Spidey himself busy for a good few hours. If you're interested in extra features and/or will be viewing on a television set then I can recommend this release. If you use a projector for viewing or aren't fussed with extras then you may want to read the Spider-Man: Superbit review before parting with your hard-earned.