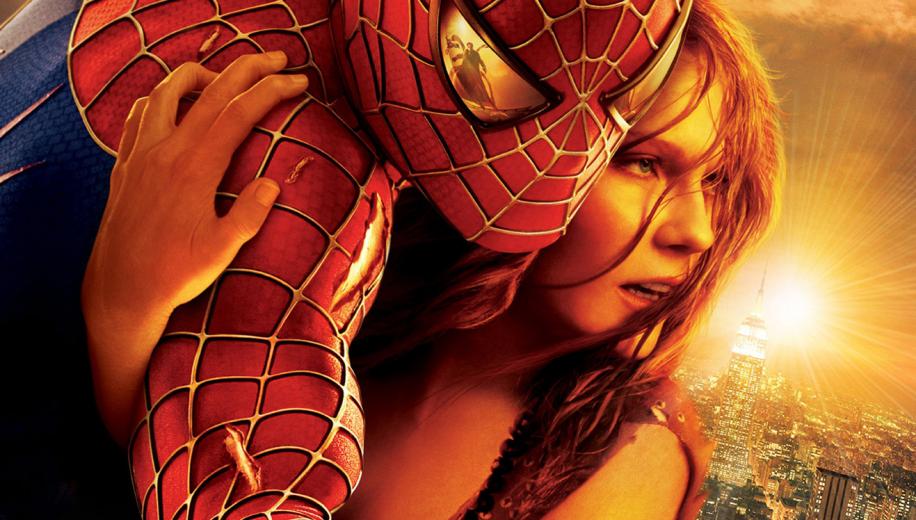 Not only one of the best sequels of all time, but arguably the best Spider-Man movie.

Back when people still had their eyes on making a good movie and not just on dollar signs, Spider-Man 2 came to be, crafted from some unused ideas from James Cameron's original Spider-Man script, a multitude of clashing script attempts, and even some scenes that were precluded from being in the first film due to budgetary restrictions (the epic train sequence), which Raimi salvaged into a rare sequel that bests its predecessor. Once again providing parallel character arcs, here we follow Parker's frustrations balancing his life in and out of the suit, and losing his powers in the process, whilst his academic mentor, Dr. Otto Octavius gets slowly driven insane by artificial intelligence-driven robotic arms fused into his body, turning into one of Spider-Man's greatest foes, Doctor Octopus.
With Maguire settling into the role, and the on-off relationship between his Parker and Dunst's Mary-Jane still striking some great notes, there's a solid foundation to the sequel's characters, but it's really Alfred Molina's tragic villain (who, thankfully, isn't a purely evil psycho, given a sympathetic backstory not wholly unlike that of Batman's Mr. Freeze) who defines this movie, allowing for not just fabulous character development for both hero and villain, but also spectacular action - arguably the best in the entire series - as Spider-Man is given a worthy and formidable opponent - again the best in the series. Indeed, Raimi's sequel is a near-perfect effort that, much like X-Men 2, ended up followed by a purely money-driven third film that almost killed the franchise entirely.

Sony's Remastered in 4K Blu-ray series once again provides the foundation, and the end result is suitably spectacular, leaving many 2K DI-based modern films behind as it crosses the finish line with its native 4K presentation. Indeed this is another one of the increasing number of truly impressive film-based native 4K back catalogue titles although, even within that elite group is still stands out as one of the best.

As with the first film, this was part of Sony's Remastered in 4K Blu-ray line from a few years back, and the same remaster is on offer here, of course with the added enhancements from HDR and WCG. Detail is even more impressive than on Spider-Man, reaching new heights on this release, affording fantastic fine observations which embrace skin and clothing textures, and background details, and lapping up the intricacies of not only the environment but also the improved effects this time around, including Doc Ock's metal tentacles.

Already pretty spectacular on the earlier 4K remastered Blu-ray, the Ultra HD Blu-ray presentation still manages to best it in almost every way, and even the fine layer of natural grain that pervades the piece only enhances the image; slightly less overt than in the first film, yet still giving the production a wonderfully filmic look. The added benefits of WCG help the colours better dazzle, retaining the natural tones that the film offers and staying faithful to the filmmakers' intentions, but still allowing the piece to pop with a newfound vibrancy. HDR affords the film excellent black levels, improved shadow detail and gradation from new levels of peak whites right down to the inky blacks. It's another fabulous looking film-based native 4K disc release. Just like the first movie, Spider-Man 2 benefits from an outstanding Dolby Atmos upgrade, founded upon a Dolby TrueHD 7.1 track which is itself unquestionably demo and reference through and through. Powerful but precise, the audio levels all manner of bombastic elements at you, bringing your living room to life with the bustle of the city streets, the screech of runaway trains, and the clank of metallic limbs.

Explosions ignite the stage and rumble underfoot, bringing some serious surround heft and tremendous LFE input, putting you right in the thick of things. Elfman's score once again underpins the proceedings, giving the film further thematic weight and providing plenty more fuel for the surrounds. It's an exciting, engaging offering, utterly immersive and suitably spectacular.

Disappointingly, as with the first film, there's nothing ported over to the Ultra HD Blu-ray disc itself beyond a few photos, with the strong selection of largely new extras relegated to the accompanying Blu-ray disc. It's a great package and, unlike the third film, it includes the superior Extended Spider-Man 2.1 (albeit, somewhat lazily, on Blu-ray only) via seamless branching. The extras themselves are headlined by another three Audio Commentaries, the first with Sam Raimi, Tobey Maguire, and two of the producers, whilst a whole host of effects experts chip in for a technical second commentary, and the third has screenwriter Alvin Sargent joined by a producer too.

There are also a number of welcome new extras including a new VH-1 Featurette, new Featurettes on the women, the score, the differences in the 2.1 cut, the effects, and the villains, a few new gag segments, a new music video and some new trailers. Ported old extras include a Featurette on the heroes, on the VFX, and a Blooper Reel. Sony have released the first five Spider-Man movies in a variety of different packages, including a 5-movie set, and separate 3-movie and 2-movie sets, with the UK's individual releases arriving in January. Returning to the best film in the entire franchise, Spider-Man 2, we find that it's in better condition than ever before, with the native 4K presentation looking tremendous and impressing - as with so many films from this era do - even in comparison to its later digital peers, ironically limited with their 2K DIs. Add to that a Dolby Atmos soundtrack and a fabulous set of extras, many of which are new, and it's well worth the upgrade. Recommended.