I can’t help but adore this movie. 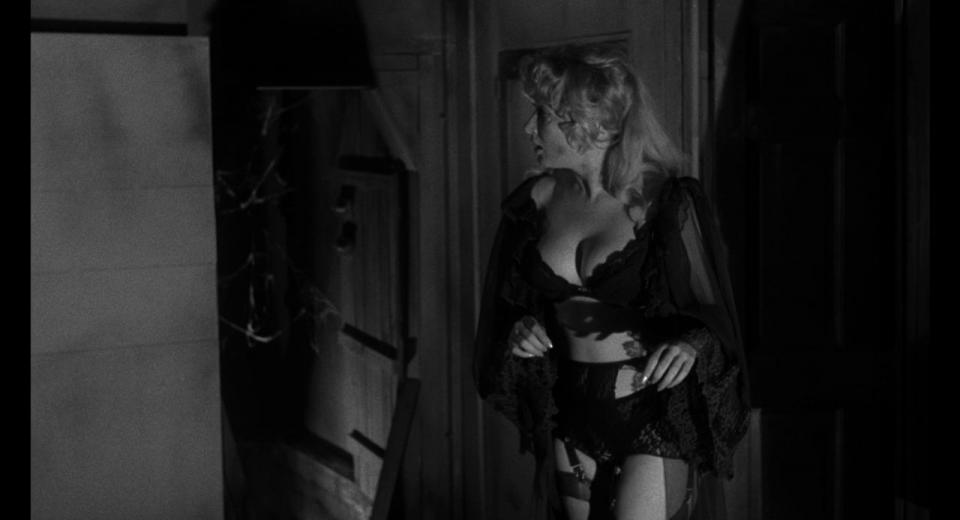 “This has gone way beyond the boundaries of prudence and good taste!”

Spider Baby was rescued from ignominy by Quentin Tarantino and Miramax’s Harvey Weinstein, who wanted to exhibit it for new audiences, and its true value as a B-movie exploitation classic was thus assured with the splicing-in of a sequence initially cut but regained from Jack Hill, himself, who supervised the overall restoration. It has been transferred from the 35mm OCN, with the extra scene culled from a 35mm check print.

Presented 1.66:1 and encoded via AVC, Spider Baby has been restored with photo-chemical means and not digital, meaning that the dirt on the print has been lifted individually and painstakingly by human eye, and not by the often indiscriminate sweep of software. The resulting image is very good indeed. It is full of grain and the texture looks fine and film-like. Now, the consistency of this does alter from scene to scene. For instance, when Mantan Moreland is trapped in the window, the shots of him struggling to get free are beautifully crystal clear, whilst the reverse shots of Virginia advancing upon him are stippled with very old-style 1930’s grit and grain. This is down to the source, as are all the other instances of this. Damage to the print is still there, of course, but I can guarantee that fans will not have seen Spider Baby look this clean, sharp and gleaming. Some little pops and cracks appear, as do some vertical lines here and there. But there is no wavering of the image, no shimmering and no fades or discoloured portions.

There is one sequence when Uncle Peter is trussed-up and trying to get away get loose when the image goes blurred and soft. At the time of writing I cannot locate my old Image Entertainment DVD to compare, but this is almost certainly down to the original elements. Sadly, it is very apparent and does distract from the film for a moment.

Contrast is excellent. The black and white imagery is showcased almost perfectly. Whites refrain from blooming, keeping highlights realistic and without any hint of glaring. Soft focus elements – such as when Carol Ohmart parades about in her lingerie – look appropriately dreamy, retaining depth and detail. Blacks are tremendous. They are very deep and stable. There is a fine greyscale to complement them, and there is no crushing going on, with the resulting shadow-play superbly evocative. The picture gains remarkable depth and vitality from this, with some of the creepier sequences – probing around in the basement, say – appearing quite striking.

Detail is frequently exceptional, folks. You can really see the benefits of the hi-def transfer with sharp lines, finite definition and superb clarity. You won’t have to strain too hard to see the crew reflected in the window of Uncle Peter’s car! Yes, there are those shots when things get mired in old school heavy grain, and there are times when Alfred Taylor uses filters and gels on the lens to achieve some visual effects. But this is a bold image that stands up well to scrutiny. Material weave in clothes, the feathers and fur on stuffed animals, the scattering of woodchips cut from a table, the few landscape shots, such as when Bruno ventures out to the construction site, and clarity afforded the rope-web that Virginia uses – these are all rendered with a surprising degree of delineation. Faces and eyes have life and vigour too, with close-ups brilliantly realized, and even the middle-ground capture of characters revealing plenty of detail.
No artificial sharpening. No unwanted noise, nor noise reduction. No banding, or aliasing.

Excellent stuff from Arrow. This is a stunning transfer. A strong 8 out of 10. Arrow can’t quite sprinkle as much magic on the lowly audio mix as they did on the video, I’m afraid. I’m not about to complain about how Spider Baby sounds, though. The movie was the product of an extremely low budget and had hardly been granted the most audacious of sound designs. We get the restored 2-channel mono track in PCM, and it does well enough. Dialogue can sometimes get a bit muffled and fall flat into dead space, but I wouldn’t say that it is ever lost, or drowned or swallowed-up. You won’t have a problem discerning any of it.

Some incidental sounds, such as birdsong, cicadas, croaking frogs and rustling leaves actually come over quite well. The wolf-howl has range and cuts through quite nicely. Impacts and low end effects work just fine too. There are some crashing chairs and cracking coffins, and the grinding of the wheel that operates the dumb-waiter makes a clear creaking as it turns. The big boom hardly constitutes the term “big boom”, but it still works well enough.

There are a couple of moments when the soundtrack suffers some fuzzy background noise. In fact, in one such instance, it sounds like a car slowly moving too near to the recording equipment. This is all down to the source, and is not an issue of the transfer. The mix does a fine job of reproducing Ron Stein’s amazing score. The jazzy flair of that main Spider Baby song is exquisitely toe-tapping, and the frequent woodwinds and warped percussion have depth and warmth within the track. The exotic and playful twang on the Fender also has a delicious vibe.

A vintage track, then. But one that frequently steps up to the plate and gives a good account of itself. The package contains both Blu-ray and DVD versions of the film and the extras.

We’ve Jack Hill and Sid Haig providing a Commentary for their hectic, madcap 60’s exploitation splash. This was actually recorded in 2012. They make a good pair of raconteurs, providing copious anecdotes about the production, the cast and the lunacy of the story. Hill comments about the strange, yet touching fact that teenage girls seem to find a lot of comfort in the film, because of the oddity and conflict of their own home situations. He also provides many great critical quotes written about the various actors that are perplexingly highbrow and pseudo-insightful. The filming and camaraderie are fondly recalled, and this chat-track makes for a great session.

The Hatching of Spider Baby is a superb retrospective documentary looking back at the production from those involved. We hear from the always amenable Hill, from stars Haig, Mitchel, Redeker, Washburn and Schanzer, and from cameraman Taylor and from director Joe Dante, who always seems to crop up in these little genre dust-offs. This is fine stuff that delivers the goods on what turned out to be a very strange movie indeed. A fair number of tales are repeated from the commentary.

Spider Stravinsky: The Cinema Sounds of Ronald Steinis splendid stuff that takes a fun tour through the scores of the unsung king of B-movie SF and Horror schlock. We hear from Ted Neuman, Jack Hill, Joe Dante and the late Stein’s wife. The classic Lon Chaney song is studied and particular attention is paid to the score of Spider Baby.

Ever wondered how the freaky gaff looks today? Well, even though there should be very little of it left after Bruno reveals his big surprise, we get to see the joint in The Merrye House Revisited which returns Jack Hill to the scene of the crime, revealing that the grand old mansion hasn’t changed much over the years, in fact.

An Alternative Title Sequence simply plays that terrific animated opening with the original title of Cannibal Orgy in place of Spider Baby.
There is a half-hour Cast and Crew Panel Discussion that takes us to a theatre to meet the guy who pulled many of the strings to get the film, alongside Herk Harvey's cult classic Carnival of Souls, restored and preserved, as he hosts a screening of them both, and then steers a Q & A session with Hill, Redeker and Washburn. Now, whilst this is actually very good and informative, the supposedly shy Quinn Redeker does inevitably let the side down with some rambling and eccentric anecdotage that, although warm-hearted and nice to hear, does make for some rather embarrassing moments.

We get an Extended Scene that gives us a little more of the big introduction when everyone finally turns up at the house.
A particular delight is the option to watch Jack Hill’s first film, the unnerving quasi-spiritual awakening short, The Host, from 1960. Reputed to be the inspiration for the final act of Coppola’s Apocalypse Now, this weird rain-making assassin Western also marks the acting debut of Sid Haig, seen here with hair … and looking an awful lot like Edward James Olmos. The synth score is great, but it does not go with the 30-minute film at all.

Alongside the reversible sleeve and the collector’s booklet, with a great interview with the cast and crew and a cool essay from artist and writer Stephen R. Bissette, there is also an image gallery and the film’s theatrical trailer. “This is the phoniest set-up I’ve ever seen.”

I can’t help but adore this movie.

It is unashamedly off its trolley, and wholly unique, yet it embraces a lot of traditional genre tropes whilst spinning off along its own chaotic and maniacal path. Both blackly funny and full of icky menace, Jack Hill’s cult classic creates a surreal atmosphere of camp dread and taboo-tickling. All the cast are terrific, and it is difficult to pick anyone who doesn’t bring something beautifully bizarre or captivatingly kooky to the pot. Lon Chaney is as magnificent as ever, as is Quinn Redeker, whose quirky characterisation really surprises, and the girls all perform with honours, especially Jill Banner and Beverly Washburn as the two murderous sisters. But a special mention has to go out to Carol Ohmart who so gamely drapes herself in stockings, suspenders and a skimpy negligee to go running through the woods. That was awful nice of her.

Horror and humour don’t often work so successfully as they do here … but Spider Baby effortlessly makes the skin crawl whilst teasing the funny-bone. To know it is to love it, as any fan can testify, and Arrow have done this wacky, subversive gem the honours with a fine release, preserving the bizarre imagery with only a slight, age-related hiccup here and there, and filling its web with a plethora of juicy goodies. Hill’s early short, The Host, is a real treat, but the commentary and the retrospective are sure to bring big grins to every Spider Baby’s face.