A 'special' team of some description... 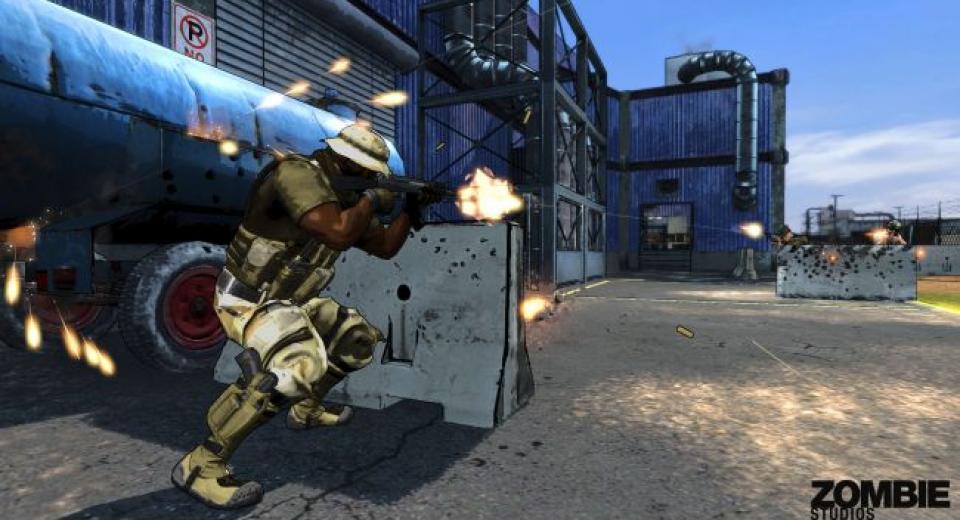 The shooter genre is one that is packed full of games ranging from the dominant (Call of Duty), the unique (Borderlands) and the downright disappointing (Colonial Marines). Creating a good shooter that isn’t labelled as a CoD clone or one that lacks any innovative features is tough, but that doesn’t stop people from trying.

Zombie Studios, the guys behind Blacklight: Tango Down and the SAW games don’t appear to be phased by the expectation placed on any shooter before it’s launched as they look to pump out another via the Xbox Live Arcade, Special Forces: Team X. With a low price tag, they have the potential to grab the imagination of those who fancy some cheap thrills assuming it hits all the right targets.

Put simply, Team X is an online only third person shooter that takes Gears of War’s cover mechanic, Borderlands' hand-drawn design and Team Fortress’ addictive nature. The result? A more than functional and occasionally exciting shooter that falls short of the glory that it was surely aiming for. Initially there is a problem with the format of this title with it being an online only affair. The online bit isn’t the problem per se, it’s the ridiculous decision made by Zombie not to include a warm-up mode for newcomers to accustom themselves before heading online. Sure, seasoned gamers aren’t going to be unfamiliar with the format but getting used to a new shooter isn’t always easy when pitted against high-level opponents. An offline bot mode or a lobby for newcomers wouldn’t go amiss here but by the same token there isn’t a hammy, ill-fitted campaign section.

It’s hard to get excited by shooters these days given the constant barraging influx seen throughout the year and Team X tries to rectify that with its alternative art style and, what should be, rewarding gameplay and mechanics. It’s equally hard though to get excited by this ‘new’ art style which everyone seems to be mimicking left, right and centre. There’s no denying it looks nice but it can be a bit sluggish and slow to materialise whilst it’s nowhere near as good as that of Borderlands. Mimicry isn’t the highest form of flattery in this case, quite the opposite in fact.

Special Forces is divided into five game modes: team deathmatch, capture zone, high value target, capture the flag and hot zone. All of these are frighteningly familiar and none of them really capture your imagination as, should you wish to play anything but team deathmatch, you’re likely to be waiting forever for a game. Where Team X falls short in terms of game modes and player numbers, it does recover some ground by putting a twist on the gameplay. Every mode is team-based which is promoted through XP boosts for those who travel in packs as opposed to as an individual. XP is as you’d expect it to be, the holy grail which you seek at the end of each game to unlock new items and level up your character.

The monumental flaw here however is that there simply isn’t enough to unlock to justify your dedication or hard-earned victories as the customisation level is dreadfully bland. There are a few recognisable weapons to obtain later on in the game (fuelling the guns in games debate for a little longer) and a few items of clothing but apart from that there is nothing to reward you for longevity.

There is a neat twist on the repetitive nature of seeing the same maps over and over again in some games, as players get to create their own map in the pre-game lobby. Each level is divided into three sections and each player gets to select their own thirds with the final vote count deciding which sections are chosen. It’s a nice little feature but a limited one at that, as the same few sections will be chosen over again allowing veterans to exploit choke points and areas of significant advantage. The character handling is quite clinical actually with few niggles with the controls, but the same isn’t the case for the weapons. Who gets a kill boils down to who can control their gun's recoil the best as opposed to who has the most powerful weapon. Firing your gun will see it spray wildly all over the place, turning the environment into a veritable colander, needing constant adjustment with the right stick. Burst fire is the way forward 90% of the time but you still find an unexplainable headshot creeps into each game somewhere along the line.

You get two loadouts to customise, giving you a ‘wealth’ of tactics to choose from. There is a glaring problem with any loadout you select though and that is one of your equipment selections, which can be an attack dog. Now any nostalgic thoughts of the ferocious dogs seen in the Call of Duty games can stay firmly in your head as these mutts are far from terrifying or ferocious.

Rather than charging down your opponents, forcing them to panic and make a mistake, they leg it 15 yards and then come to a grinding halt. For all intents and purposes they might as well take a leak in the hope an enemy will slip on it and bang their head as they serve as nothing more than cannon fodder.

A successful team game should have communication as one of its foundations to ensure gamers take full advantage of the team rewards on offer for playing as a unit. The problem is that nobody communicates and nobody ever sticks together, the lone wolf tactic is far too easy and the team initiative isn’t as rewarding as it should be. With the maps being so small, travelling as a team can be dangerous as choke points become far too common with full auto guns cutting through enemies like ribbons if they stand in close proximity to one another.

In theory, Special Forces: Team X is a good game but is flawed when it comes to putting its ideas into practice. Sure, the hand-drawn style is still quite appealing and fresh but beyond that it's just another run-of-the-mill shooter which will hold your attention for no more than a couple of weeks and be instantly forgotten. Had the teamwork mechanics worked better and been enforced more strictly then it could have been quite a tactical affair, but as it stands the lone wolves out there put that to bed almost instantly.

If you can convince some close friends to pick this up however and form your own little unit, you can create an effective team that will be a force to be reckoned with despite the aiming issues and the small number of unlockables.