Will you cross the line? 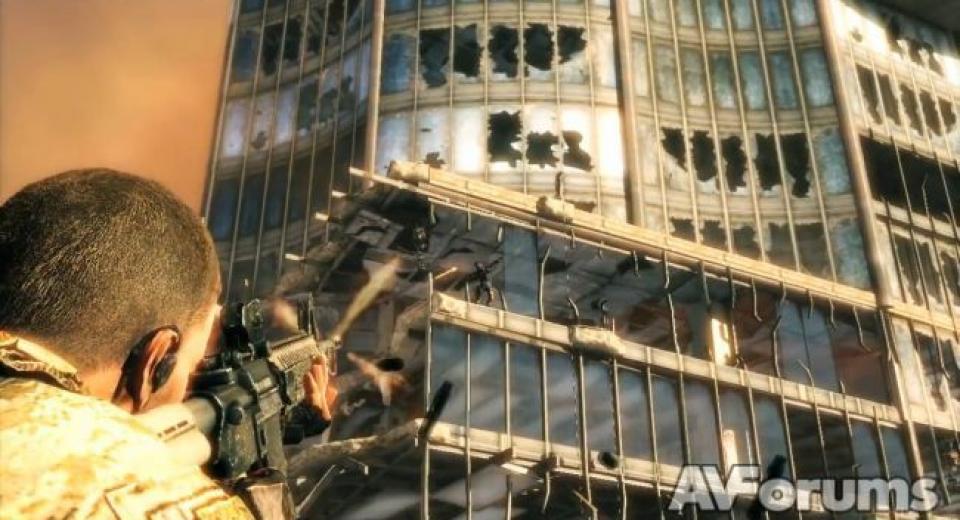 You probably think you already know everything there is to know about Spec Ops: The Line. Yet another cover based third person shooter developed in the Unreal engine; this time delivered by Yager Development and published by 2K Games. Although this title resurrects an old franchise it has no ties to the original games and can be considered the definition of a reboot. Spec Ops: The Line puts you in the boots of Captain Martin Walker who is the commanding officer of Delta Force. A team which has been tasked with locating and extracting the 33rd battalion and its Colonel Konrad who went missing in Dubai after it was ravaged by a series of severe sandstorms, leaving a apocalyptic husk where there once stood the opulent jewel of the United Arab Emirates.

Dubai is a spectacular city; although the backdrop can sometimes over do that brown the Unreal engine is so well known for, it does an excellent job of applying a destroyed beauty quality to a city which has an abundance of spectacular skyscrapers. The sandstorms are preventing communication; Dubai has been abandoned and designated a "no man's land". However Captain Walker and his team discover this is far from the case. Dubai has been transformed into a lawless wasteland in the desert. Only broken up by the ominous spires which you navigate across using the many zip lines above the landscape revealing an eerie picture as the city slowly sinks in more ways than one. On the ground the view is less spectacular, with post-apocalyptic wastelands now more common than the Normandy beaches. Buildings are linear jaunts through deserted office spaces and luxury rooftops, the ground when you can reach it; is populated with cars and wreckage from the old city. The one mechanic Spec Ops would have you believe sets it apart is the sand. Since many of the structures you are fighting in are beneath "sand-level" you can use this to your advantage. Smashing glass ceilings and walls to bury your enemies or create new paths, grenades kick up a sand cloud which temporarily disorientate enemies meanwhile sandstorms still occasionally rage through the city reducing visibility during fire fights.

These distractions aren't enough to hide the fact that mechanically Spec Ops: The Line is straight out of the Unreal mould which has you moving from cover to cover popping out to deliver head shots before moving forward. There are some minor tweaks such as the ability to select an enemy for your teammates to concentrate fire on or hit with a flash bang. You also have to revive teammates who go down before they bleed out. The implementation of the squad based mechanics can largely be ignored as it's generally your responsibility to "slot" all of the "hostiles".

Oddly the soundtrack helps provide a little flavour, with a DJ (of sorts) broadcasting throughout Dubai, select tunes actually enhance the experience; with odd selections like Nowhere to Run by Martha and the Vandellas providing comedy and Jimi Hendrix's Star Spangled Banner perfectly reflecting the helpless tone. Weapons are the standard fare, Pistols, SMGs, Shotguns and Rifles, of which you can only carry two at once. None of them have particularly large clips leading to a lot of weapon swapping and ammo hunting before and after each fire fight. The shooting itself is tight if a little mundane; enemies largely stick to their cover before giving you a target, occasionally you'll get a kamikaze knife solider lunge at you but beyond that it's a comfortably manageable campaign on normal difficulty. Pallet cleansers come in the form of the obligatory turret sequences and the occasional use of different weapons systems such as grenade launchers and mortars.

The only thing stopping Spec Ops from being just another clone is its narrative; discovering the fate of Dubai and the AWOL 33rd battalion slowly unravels into an interesting character piece which poses questions regarding the morality of decisions made in war and the devastating effects it can have on all involved. Choices play a large part in achieving this, these choices will then be reflected in the reactions of your team. As you frequently pick your way through decisions which range from terrible to horrific, your team will treat you differently leading to some surprisingly interesting conclusions in the multiple endings. If there is any doubt that the narrative is the only thing stopping Spec Ops: The Line from getting lost in the crowd you need only look to the multiplayer for confirmation. Take away the characterizations and story twists and you're left with a predictable shell which will fail to disturb any of the established multiplayer communities. All the bullet points have been checked off; class system, XP, ranks, team death match with a sprinkling of objective based modes. The most exciting development is that the odd sandstorm will whip through maps reducing visibility temporarily; achieving nothing more than proving the combat is even worse at close quarters. There is nothing here that will hold anyone's attention beyond an initial curiosity, the multiplayer lobbies will end up emptier than the fictional streets of their depiction of a ravaged Dubai.

Spec Ops: The Line is very close to being another forgettable shooter destined for the bargain bin, but players who persevere through initial predictability will discover a campaign which holds more substance and surprises than is apparent at first glance. By the time the credits roll it's apparent that the developers had something to say with this title and the way in which they say it is executed surprisingly well. However the framework used does the game no favours and only invites comparisons with other well established and simply superior existing titles. With what amounts to a throw away multiplayer component and a 8-10 hour campaign, Spec Ops: The Line can't hope to compete in an already overcrowded genre but still manages to deliver a few worthwhile surprises.