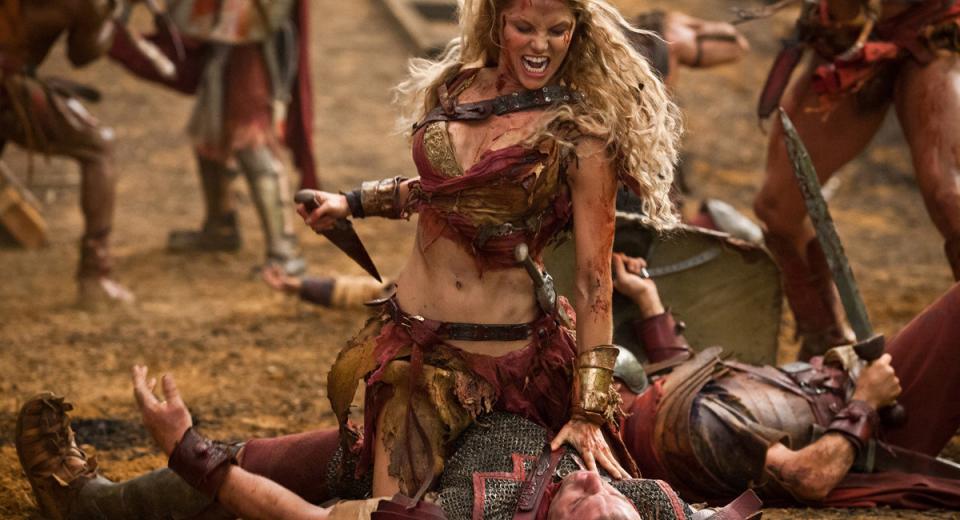 The transfers of the first two seasons and the prequel were all exemplary. And, thankfully, War of the Damned pretty much follows suit with an often absolutely scintillating image that has the potential to offer jaw-dropping detail and vivid colour, alongside a visual breadth that fully appreciates the greater levels of scope that the CG backdrops and larger sets demand. This said, however, the transfers on this UK edition do not reach the same levels of clarity, richness and sheer gore-soaked saturation that I found on the previous seasons, of which I only have US editions. This is mainly due to contrast levels that are not on a par, leading to an image that loses that sharp edge and lusty veneer. This image is hazier and somewhat earthier than those previously seen, although I am certain that this is a design aesthetic from the makers, themselves. And this is how it looked during its broadcast run, from what I can remember.

There are traces of banding taking place, most acutely during the title credits, but also seen in a couple of slow dissolves and some of the brooding, grey backdrops ... though they are hardly a distraction. Grain appears periodically, for the purposes of visual accentuation and grit as and when required. DNR does not rob the image of any integrity. Artificial sharpening poses no problem, and there is only minimal aliasing that I spotted. On the transfer front, this fares very well, with the CG elements and the digital requirements of the photography not losing any sense of depth and retaining immense visual style and comic-book panache. Aaron Morton’s cinematography is absolutely exquisite throughout and, by and large, this transfer does it justice.

There are no complaints about the clarity and detail of the close-ups, which are stunning. Faces are covered with stubble, matted with blood and dirt, frozen with ice or just plain battered and bruised – and you can clearly every nick, scratch, hair and pore on offer with finite attention. The more interesting acres of exposed flesh also gain further appreciation as a direct result. The funny thing is that furry mirkins now look a little bit more apparent too, but the eagle-eyed amongst you will also find plenty of merit in the appraisal of normally hidden bits and bobs. And, let’s face it, that’s pretty much all of us! This detail is naturally reflected in the copious wounds and mutilations. From bisected hands and heads, cleaved craniums, bludgeoned brain matter, lifted skull-tissue and hacked-open torsos to rivers of blood on the ground, gore running down blades and fountaining into the air, there is no doubting its stringent accuracy.

The larger canvas revealed here caters for vast legions of Roman soldiers stretched out across the frame. Deeper landscapes and more meticulously composed citadels punctuate the image, and early episodes still look surprisingly fake, with little clumpy figures and a strangely alien and artificial movement afforded such long-distance squadrons and civilian flotillas. Yet as the series progresses, these elements seem to grow smoother and better integrated, figures single, or amassed, gaining more realistic movements and a greater sense of weight against the provocatively rendered backdrops. It is actually quite rewarding to study the big shots, such as the vast Roman encampment that fills a valley floor, to spot the individuals going about their digitised business.

Blacks, as you may have guessed from my comments regarding the contrast, are not as deep and commanding as they could be. I cannot complain about the shadow definition, though, as there is still plenty of detail that is unobscured. But I would rather have had deeper levels of darkness to lend weight to the night-time scenes, or those taking place within dimly lit interiors. Brighter elements, such as fire and torch-light, or the white-out frost of the frozen plateau fare very well and appear without hiccup.

All in all, if you love the show, you are sure to be pleased with its presentation on disc. Like their predecessors before them, these episodes come equipped with a lossless 5.1 audio mix. My US editions of the first seasons had Dolby TrueHD, whilst this UK set boasts DTS-HD MA. There is also an LPCM stereo track, but the surround mix is definitely the way to go.

Dialogue and separation across the front are fine, and come across with clarity and agreeable width. Bass is well-rendered and deep impacts are suitably energised without being too bombastic.

The most noticeable bonus for the lossless surround track is the extension and depth afforded to Jo DoLuca’s terrific score, which often fills the room with exotic percussion, bruising brass and wailing voices. These anthems and dirges can reach around to the rear speakers too, adding spice and spatiality to the score.

Other elements that gain vitality and life from the extra channels are, of course, the battle scenes. We are thrust palpably deeper into the fray, with clashing steel ringing primarily across the front, but also frequently embellished with peripheral and background impacts that resonate with satisfying vigour. Arrows and flaming pots, and those huge spear-bolts unleashed from ballistae fly across the soundfield, and even if the front-to-back steerage isn’t as clear or as dynamic as you might have hoped for, it is still a welcome component that helps brings the carnage home to you with some degree of force.

Crowd scenes have ambience that filters around the set-up. Voices, the hammering of steel, the flapping of tent-canvas, distant trumpet-calls and the trundling of legionary feet for horses’ hooves also find their way around the speakers, and add to a sense of immersion. There is a nice moment when the treacherous Cilician pirate captain’s voice floats past from the rear right to the front as his ship ploughs towards the quay. And, during the finale, we can hear the nails being bashed into rebel wrists, as well as the screams of the crucified rippling deeper into the mix.

There are vastly superior sound-mixes out there, of course, but this is a track that perfectly brings Spartacus’ final crusade to a Roman-smiting triumph. The previous boxsets were lavished with commentary tracks and featurettes, rounding out the package and the whole Spartacus experience with fun, informative and entertaining asides about the production. But, here, on the series finale, we get nothing.

I am tempted to advise that you all steer well clear until we see what he US release has in store, but being as Region-locking is an issue, B-users may have to just bite the bullet.

Jeez, the bloody show is worth it, anyway. But, come on ... what’s the score?

Well, I’ll tell you the score, shall I? Absolutely bloody zilch in this category. “Legends are but meat and bones ... resting in the harsh sun of reality.”

One of the greatest shows that have ever been produced for television, Spartacus effortlessly trounces all big screen battle-epics in terms of visceral excess and inventive carnage. It made audiences become as blood-hungry as the mob baying all around the arena, eager for more ferocity and titillation – and, by all the gods, getting it, too! Not a single episode out of the entire series lacked action, sex, shocks and glory.

Liam McIntyre totally embraces the role and invests tremendous heart and soul. His final episode is both stunning and heartbreaking, and I’m certain that Andy Whitfield would be proud of his performance. But then all the cast are excellent ... and quite brave too, when you consider the excesses of emotion they are forced to deliver and the, ahem, graphic nature of their characters’ plight.

What stuns me and compels me to cry out against this seemingly rushed release is the woefully unforgivable lack of extra features. With all the previous season boxsets brimming with chat-tracks and docs, it is a bewildering shock that the best season of the entire lot receives nothing at all. I cannot explain why this is without hinting at a lurking sense of conspiracy and a deep seething resentment. Will fans have to buy this set all over again? Or import it from another territory? Very possibly.

Still, at the end of the day, it is the show that counts the most. And, quite frankly, there is nothing out there that can compete with it. Games of Thrones is its own entity but, together with Spartacus, represents the greatest that TV can produce in terms of intricate historical fantasy.

Of the two, I find myself more enamoured and smitten with Spartacus and I will sorely miss it. But what a legacy. All three seasons, plus the prequel, have been outstanding. And War of the Damned is as perfect a conclusion as you could wish for.

The show comes with my highest endorsement, even if this set is lacking the extra features that you know should be there.