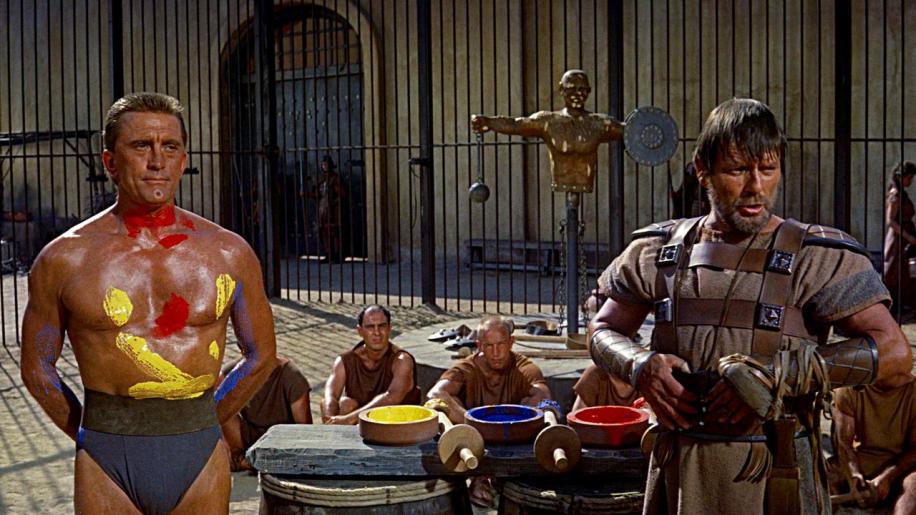 Though the 2.35:1 anamorphic
picture is strong and colourful, with plenty
of detail and little visible movement, it's
grainy, and there's the odd spot of print
damage which you would have thought it
possible to remove. Watchable, but hardly
as spectacular as the subject-matter
might deserve.

English in Dolby Digital 5.1 or
DTS. Though it's loud, there doesn't
seem to be much depth or detail to it;
listen to the attack on the village in Chapter
16 and all you'll hear is shouting and the
musical score.

The feature has a commentary by
Douglas, writer Howard Fast, Peter Ustinov,
Edward Lewis and Saul Bass, and a sceneby-
scene analysis by Dalton Trumbo with
additional music by Alex North, plus English
subtitles. On the second disc, along with
the remainder of the film, are three
deleted scenes, one with UK and US
versions; five pieces of vintage newsreel
footage; interviews with Jean Simmons
and Peter Ustinov; on-set footage from the
gladiator school, production stills, lobby
cards, posters, comic strips, sketches,
storyboards, and a trailer. Lastly, there's a
15-minute piece on the Hollywood 10
subpoenaed to appear before the House
Committee on Un-American Activities.A classic quasi-Kubrick historical melodrama,
served by an equally spectacular
DVD package.