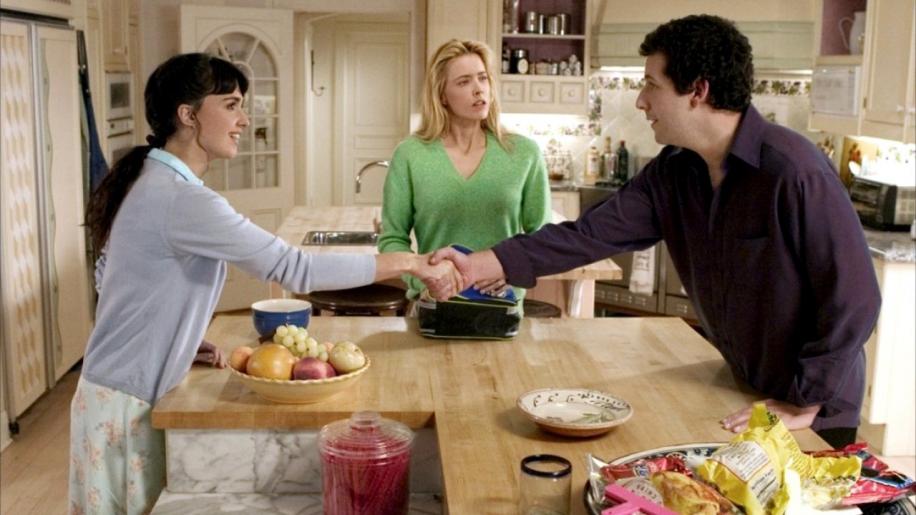 Spanglish is presented in a 1.85:1 aspect ratio anamorphically enhanced widescreen transfer. The detail is pretty fantastic, with clarity throughout and no softness. There is little noticeable edge enhancement and no sign of other digital artefacts. The colour scheme is broad and luscious - portraying the movie as summery and warm - and the colours are always well observed. Black levels are good, with solid, deep shadow and no noticeable grain. There is also no print damage in the form of scratches or defects and overall this is a pretty damn good-looking transfer. The main audio track is a solid Dolby Digital 5.1 effort with the emphasis on the all-important dialogue - coming through the frontal array. The small effects noises, mainly kitchen or car related, are keenly observed but the most noticeable aspect of the track is the score than runs throughout all of the important scenes. Brooding and tapping along in the background it often heightens the humour and certainly creates the right atmosphere for the movie. Perhaps not the most powerful soundtrack that I have come across it is still quite a moving, absorbing affair. There is also a Spanish 5.1 track and an English Audio Descriptive option. Firstly there is a commentary with the writer / director James L. Brooks who is paired with editors Richard Marks and Tia Nolan. Recorded a month after the movie was released, they jump straight in with talk of re-shoots and alternative versions - the opening section was changed to create a different tone to the movie and change the movie's perspective. I'm not sure whether I agree with their choice, but nevertheless it's nice to understand what happened. They discuss the huge cuts they made to the set-up part of the first act and various other sections, and then move onto the casting choices they made. Interestingly, the director notes how his 'clash' with Téa Leoni was reported in the news at the time of filming. Apparently they both found it hard nailing the character she plays - admittedly it is not an easy role - but it is interesting to hear his side of the process. It is quite a nice little commentary but the two editors don't really seem to do a great deal and are generally swamped by the director who probably should have just done this by himself.

Next we get twelve deleted scenes with optional commentary by the director. Unfortunately you cannot play them all without the commentary, although when you select to play them all with commentary, it is quite nice that you get a little introduction by the director over a short montage of clips. First an unnecessary two-minute scene where they make their journey to the States and a scene which extends the first introductory meeting between Flor and the Clasky. Then we get a four-minute scene with more Adam Sandler - always a good thing - and an excellent extension to the first argument about the breast. The next scene, between Flor and Deborah in the car seems a little unnecessary; though there is some nice impromptu singing and then we get another brief extension, this time to the scene where John is getting drunk in the refrigerated section of his restaurant - making it a little funnier. We get a minute of interaction between the kids, then a minute of Deborah being stupid to her daughter again, a pointless extension to the scene where Deborah's mother is counselling her and a couple of unnecessary extensions to the cooking scene between John and Flor. Finally there is quite an interesting extension to the ending - even if it is also unnecessary. Overall, there are a few additions worth taking a look at, particularly if you like the movie. The thirty-one minute 'play all with commentary' option is fairly interesting as the director explains why the scenes were cut and the lost storylines involved but unfortunately he does not really talk a great deal, making the exercise somewhat pointless.

There is a thirteen-minute HBO Making-Of featuring interviews with all of the main cast and crew, including Adam Sandler and Téa Leone both talking about how great the director is, and the director himself discussing the characters. They spend a lot of time explaining the story that you already know and it is a ludicrously fluffy featurette with only a scattering of sound bites from the people involved in proportion to the huge amount of film footage we get to pad it out. Still, they do manage to skip over the various cycles involved in the production - including casting and set design - with a certain divulgence of interesting titbits. The clips with Paz Vega, who clearly actually has very little knowledge of English in real life, are a particularly pleasant feature. The Casting Sessions featurette runs at a little over four minutes and has optional commentary with the director. They look at the young girl who was only involved in playing Flor's daughter during the very first few minutes in the movie and then the girl who plays the older version of the daughter. We get a minute of audition with the girl who plays Deborah's daughter and then the gem is a brief casting session between Paz Vega and Adam Sandler, where you can clearly see Vega's talent - something reflected upon in the interesting if overly enthusiastic optional commentary.

Finally we get a featurette entitled How to Make the World's Greatest Sandwich. Featuring the chef Thomas Keller, we spend five minutes in the kitchen where Adam Sandler is taught how to make the succulent sandwich that his character creates midway through the movie. Annoyingly, the director chips in with forced commentary during the featurette but luckily he drops out in time for you to get most of what is being said and taught. At the very end there is a scrolling list of ingredients and recipe for how to make it yourself - believe me it looks delicious enough to be worth giving a try. The DVD-Rom features include the complete screenplay, which I suspect would be quite interesting to compare to the final cut of the movie as - from what they stated on the commentary - they are very different indeed. Spanglish is a warm little romantic comedy, centred on a bevy of brilliant and very unusual performances. Asserting a tendency to want to be a cultural family drama, it may not be to everybody's taste but it is still probably worth taking a chance on - although unlikely to spawn any great sentiments of like or dislike, it is certainly a harmless way of idling away a couple of hours. For those often put off by Adam Sandler, you should not be worried as this is not a typical Sandler movie, but if you do like him then you might still be pleasantly surprised by the atypical performance he gives. This release offers a fabulous transfer and solid sound, with a rich set of extras that offer just about everything you would want in the way of features. I would strongly recommend a rental to see if you like it, although if you do want to buy the film then this certainly seems like a solid version to purchase.