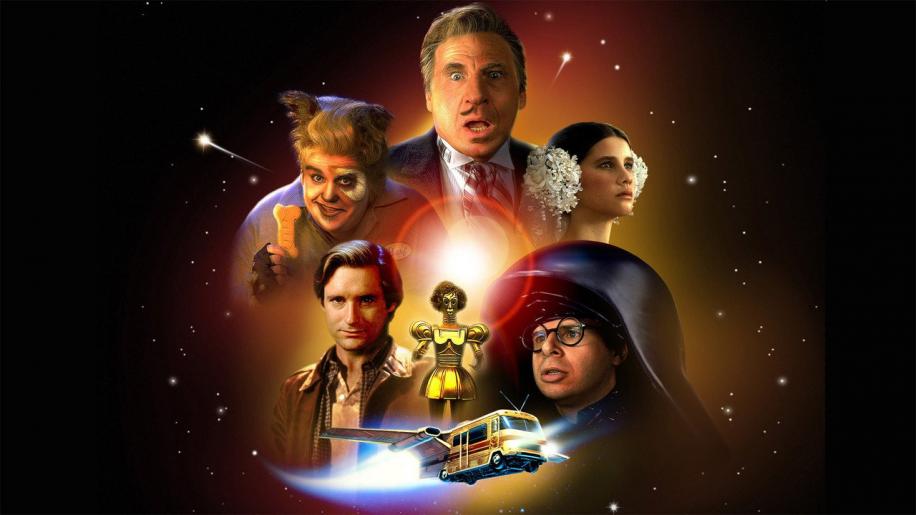 This is a nice picture. There's no dirt or damage to the print, and it all looks clean and sharp. Colours are vivid and blacks are nice and deep. There's little grain evident apart from a few matte shots which looked a little noisy for some reason, but not jarringly so. I didn't notice any edge enhancement and there were hardly any compression artefacts. There was a little on scenes containing smoke moving in slow-motion and suchlike but it was always brief. It's a good quality transfer. The audio is well catered for in this movie with sound effects, music and vocals delivered with clarity. The DTS 5.1 track contains some subtly immersive effects with some good panning coming through. As a Star Wars spoof there are all the spaceship effects you would expect and they're well implemented and distinct. The subwoofer doesn't get stretched as much as I expected but all of the other channels get regular use. It's a solid soundtrack. On the first disc is a commentary by Mel Brooks which is quite entertaining and he comes across as still having a youthful, fun-loving zeal which is good for an old cove. It's just a shame that I just can't see what he's so proud of in this particular case. The only other extra is the ability to watch the film at 'ludicrous speed' - in other words a fast-forwarded version of the film, compressed into twenty seconds. Well, I guess you could call it an extra.

The second disc is devoted to the bulk of the special features. To start with there's some trailers, including an early promo with Mel Brooks mucking about with the film's titles, which is a nice curiosity piece. There's a newly made thirty minute documentary where most of the cast talk about their memories of the production which isn't too bad at all, but my word, it's got horrible music! All the way through dreadful American muzak tunes continually pop up and mar the piece. Note to editors and directors - Just let people talk for flips sake! There's a ten minute featurette on the late John Candy which is rather unsubstantial and shallow considering the body of the man's work, but better than nothing. There's also an older filmed conversation with Mel Brooks and his co-writer Thomas Meehan which is quite good as they discuss how the film came about. In another section, there are three photo galleries with about a dozen pictures in each. One thing that made me laugh is that in the costume design gallery, the artist draws the skinniest people with the longest legs I have ever seen. They're like pipe cleaners. Good grief, how did this guy get a job - learn some anatomy, dude! Now then, what else? Well, there's a storyboard comparison feature showing some pictures side by side with the scenes as they play out. This can be interesting in a visually arresting scene or an action set piece, but can be a bit banal when it shows scenes where nothing much happens. There's also a novel film quiz feature which could have been better implemented as it's rather short with a poor pay-off, but it's still a nice idea. Finally, a pointless quotes feature finishes the disc off, where you click on a character and it plays a tiny clip of an innocuous quote they said. Big deal! So it's a mixed bag of extras, all in all. Die hard Brooks fans will get a lot more out of them than the casual viewer, of course. However, for a seemingly definitive collectors edition, where on earth are the deleted scenes and out takes? Surely a Mel Brooks comedy of all things would have many funny behind-the-scenes moments? Where is the original 'Making of' featurette from the first R1 DVD release? That's gone AWOL as well. Shame. As Spaceballs is an older and much seen film many will already know whether they like it or not. Those that do will be pleased to know that this release has got a nice presentation with a good picture quality and sound, and a fair array of extras. But for me personally, Spaceballs bored me most of the time and I would only recommend it as a rental.