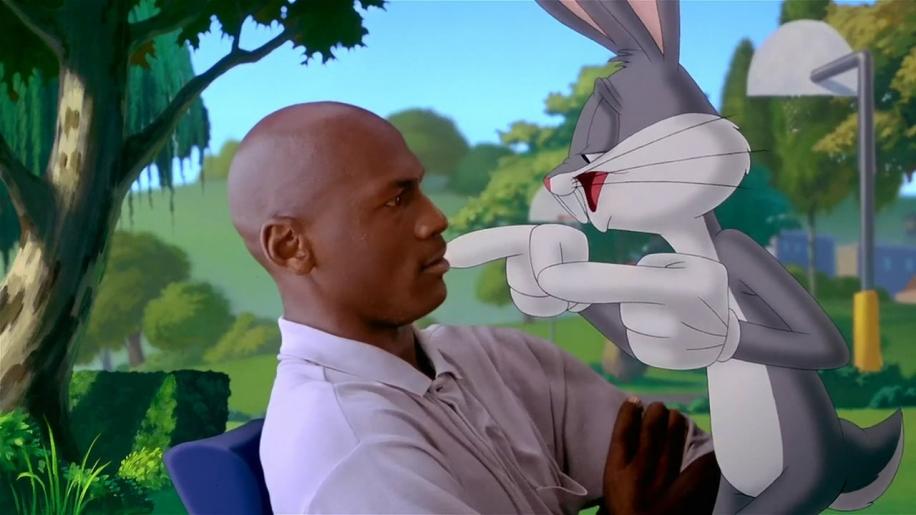 Digitally remastered for this Special Edition release and presented in a 1.85:1 anamorphic widescreen print, the picture is excellent for the most part. The animated parts fare particularly well. A rich, lush colour palette has been used with areas of classic cell painted animation mingled with the 3D computer generated areas in a superb, bright, sharp image. No digital enhancement is visible and no digital artefacts are present. The live action sections don't fare quite so well. Colours are slightly anaemic with some grain apparent; the scene on the golf course demonstrates this well. The melding of animation and live action does reveal this dichotomy somewhat and can prove a little annoying to picture freaks like myself. Sane people will be unconcerned as in the main these deficiencies are minor.

The sound mix is Dolby Digital 5.1 encoded at 448kbps. Being a mainly animated feature the sound is as exaggerated as the colour palette. Huge explosions, a diverse and encompassing surround field with effects whizzing front to back and left to right, and a bass heavy soundtrack from artists such as R. Kelly (with the Emmy award winning “I Believe I Can Fly”) Seal and Busta Rhymes. It was both a surprise and a joy to hear, although (and I never thought I would ever say this) I thought the bass effects were over done. In scenes containing the MonStars basketball team for example every footfall of the team members' results in shuddering bass extension, which occasionally swamps dialogue. Apart from this quibble a first rate job has been done of the whole encoding. Hey, anything that can get me warbling “I Believe I Can Fly” at the top of my voice must at least be engrossing!

Well here is the crux of the matter isn't it? The thing is Space Jam has already been released on DVD as a standard single disc in 1997, and as an Extended Edition in 2000 with the feature commentary track, and the music videos. So the question is Do you want to buy the movie all over again for the other extras? Well what do you get? You cry. First a mention for the feature commentary. It is both sparse and tedious. It probably seemed like a really good, hilarious idea to get the “stars” of the movie to do the commentary, except of course that they aren't the stars, they are voice actors (a commentary by the incredible Mel Blanc would have been excellent - if technically impossible). As a result long periods of silence are interspersed with the “wit” of the Bugs and Daffy voice actors. It was clearly not scripted, and spontaneity is obviously not a virtue. A definite miss

Most of the extras are concentrated on disc 2. The disc opens with a wonderful behind the scenes feature called “Jammin' with Bugs and Michael” a 22 minute documentary packed with interviews, classic cartoon clips, vintage footage of Tex Avery and Mel Blanc developing the original Bugs Bunny and Elmer Fudd, and details of the animation and green screen techniques used to bring the movie to life. I would have liked to see more of this kind of stuff, as this flash through the production process is all too brief. The bulk of the rest of the disc is over 1 hour of classic Loony Tunes Cartoons, which, according to the blurb, are not to be found anywhere else on DVD. These include some all time favourites such as “The Duxorcist” with Daffy playing a ghost buster who's TV add claims that he “Spooks Spooks, Alienates Aliens, K.O's UFO's and Gobbles Goblins”, clearly a more innocent age. They had me rolling with laughter sometimes, as above, quite unintentionally, and are the highlight of the extras. The padding comes in the form of production notes, music videos and the Loony Tunes video game demo for PC - As a Mac user I was unable to play this.Space Jam is an excellent family movie with plenty on offer for young and old alike. The remastered disc offers excellent though bass heavy sound, and beautiful lucid animated images. The extras are bountiful though some are less than worthwhile. If I didn't already own a copy then buying this is a no-brainer, but three releases in 7 years is almost on a par with the Alien franchise, and this does nothing to quell the arguments that studios are milking the DVD cash cow a little too vigorously.