Space: Above And Beyond DVD Review 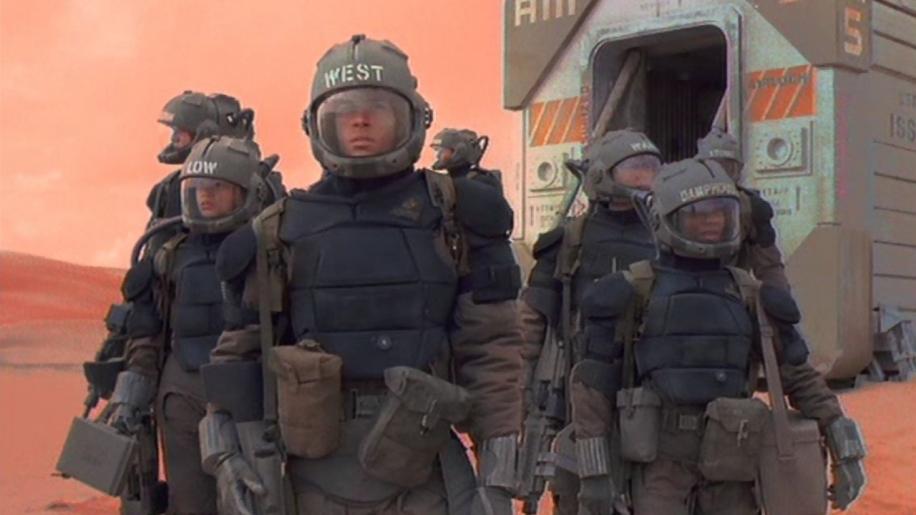 Being an older TV show, we have a normal 4:3 presentation and it's ok, but it's not great. The problem is that Fox probably shouldn't have put so many episodes on the disks per side - on one disk we have 6 episodes, 3 per side and it just feels overly compressed or 4 on one side of the final disk. Having said that in terms of a transfer, this is generally good stuff, but some problems do exist, but these are source material issues, for example one minute the transfer looks fine but then it moves scene and it's incredibly grainy, but to reiterate, that's not a transfer fault. Colours are fine with skin tones and black levels, of which there are plenty due to space being black, being spot on when the source material is at its best. No edge enhancement was noticeable nor did I notice many artefacts from the compression. As I said there are some grainy moments throughout and a couple of times I had a glitch on disk 1, side 1 but other than that, this is an adequate transfer. Not sure you can get too excited about a Dolby Stereo soundtrack, but at least if you enable ProLogic IIx decoding, it gives it a bit more life. Dialogue is clear with some nice separation in the front channels during the action sequences. There's no crackling or other side effects, but it isn't particularly immersive - again the limitation of an old TV show. While it serves its purpose well, generally speaking it is a very unimpressive soundtrack that does what's asked of it but nothing more. The sole extras are 12 TV Spots from the show, 6 of which relate to the pilot episode. We really could have done with an interview or two from Morgan and Wong explaining what happened and why it was cancelled - Fox have done it on other releases, why not here? Sacrilige. I loved watching this again, having not seen it since it played on Sky originally. It was more to my taste than Babylon 5 and Star Trek, being just a little grittier. I may seem harsh in my ratings, but I'm taking into account the limitations of the show against the format. Compared to some of the latest TV shows, which are widescreen and have 5.1 soundtracks, this can't help but look aged, but that said, it's not a disappointment viewing wise. I'm glad this has come out at least on some format and if you like Battlestar, you'll probably get a kick out of this.