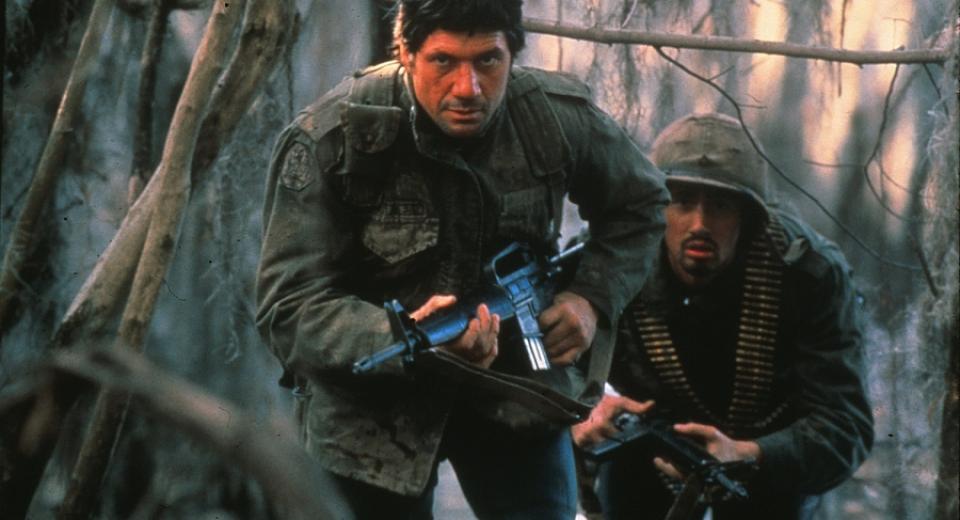 A PCM 2-channel mono mix reflects the dated and severely limited nature of the original source elements by being very, very quiet and quite low-down and muddied.

Turn the volume up and the dialogue – so often the most enjoyable element of the drama, anyway – becomes a lot easier to understand. We have various accents and dialects on offer, from Creole and Cajun-French to Texan, and it is often quite a joy to navigate the vowel-manglings, gruff drawl and exotic patois. As I said in the main review, this is the first time that I have been able to properly understand what T.K. Carter’s dope-smoking Cribbs says to the Coach when on sentry duty, so there’s a plus to the lossless mix right there.

Walter Hill certainly has some fun in the swamp. There are lots of effects in the film. Obviously there is the copious shooting taking place. The lovely, almost “cute” sound of the rather petty M16s and the meatier, more solid and echoing blast of the Cajun shotguns and hunting rifles. Well, these are respectfully limited in clout … which is a polite way of saying that they sound quite weak. They work in the scheme of things, and it is only right to maintain the fact that they sound authentic to the source. But given the nature of the film, it would have been great to have heard them benefit from a remix. Sudden impacts, such a wall of spikes making horrific contact with a human body, the galvanising sound of a knife thudding deep into a crotch, the throaty crunch and creaking fall of lots of trees cascading down, the slamming shut of a steel man-trap, the stomping of feet as dancers move about a wooden floor, and the glorious little clicking and clacking as blank shells are ejected from a rifle, are all present and correct, and they aren’t muffled or drowned by the mix, the sound design an interesting one that is only compromised by the limitation of its low budget ambition. The soundtrack is also punctuated by birdsong, thunder and rain, and incessant sloshing of muddy water. Now, these ambient elements actually come across reasonably well. There’s the far-away whupp-whupping of helicopter rotors that come closer, and the roar of a hurtling freight train but, as you would expect, there is no appreciable depth or steerage. Ry Cooder’s score sounds very nice, though, as does the infectious Cajun band during the finale. The little chime of the triangle comes over clearly too.

Overall, for a dated audio track, this performs adequately. A remix would actually have been a nice idea. Imagine those falling trees creaking and crashing all around you, or the sound of the Cajun hunters sploshing about just over your shoulder, from left to right.

6 out of 10 for a faithful presentation. We get a new 45-minute interview with Walter Hill entitled Will He Live or Will He Die – the name hailing from John Ford’s old adage about where the drama in such films really lies.

To be quite blunt, this is a somewhat disappointing affair. Hill relaxes beside his pool, as the image is starkly whited-out by sun-glare behind him, and he reflects about his experiences making the film. Just to have him talk about Southern Comfort should be satisfying enough, but he does so in a very stuttery, rambling manner for much of the time, with lots of umms, ahhs and errs holding up the flow. The piece is chapterised by themes, and liberally illustrated by footage from the film. By far the best segment is when Hill discusses his cast, the attributes that drew him to each member, and how they dealt with their respective characters. He is clearly sentimental about these guys and very respectful of the time they shared on location and the qualities they brought to the movie. He spends a fair amount of time reminiscing about particular actors, like Keith Carradine, Powers Boothe, Carlos Brown (aka Alan Autrey), Brion James and especially Franklyn Seales, who died tragically only a few years after the production.

There are a few anecdotes flung across the bows, but there are a lot of elements that only get lightly touched-upon, with the plot and the action left a little bit high and dry. Of interest, however, is his still belligerent and bull-headed attitude towards the whole Vietnam allegory side of Southern Comfort. Now, as I’ve already discussed, there is absolutely no question of this not being the case, so his determined refusal, and very telling rebuff of “No Comment!” just prove quite infuriating.

Personally, I would have loved an ensemble commentary track with the surviving members of the cast. Remember the boozy group yak from the platoon from Dog Soldiers? That sort of approach could have gone down well. The ominous and foreboding original trailer would have been cool, too. It’s the land of hospitality, unless you don’t belong there.

Rural America seeks to devour those that trespass within it in Walter Hill’s outstanding entry in the redneck terror genre. Arming his dubiously “good” guys with blanks and casting them adrift in purely hostile territory, he creates a powerful metaphor for the US’s doomed involvement in Vietnam – whether he’ll ever admit to it, or not. A very strong ensemble cast make their escalating predicament ever-more gripping, and the constant threat from some very nasty natives keeps the skin bristling.

Whilst visually grey and murky, the film also positions within the bleak no-man’s-land of collapsed morals and blinkered compassion. Our heroes have started this little war, yet even though we can’t honestly say that we would invite any of them round for tea, we feel for them and pray that they’ll make it out alive. Great performances from Powers Boothe, Keith Carradine, Brion James and Fred Ward provide power and weight, yet it is the supporting members of the squad who often linger in the mind afterwards. Both Les Lannom and Franklyn Seales work wonders with fragile and difficult roles.

Second Sight deserves a lot of credit for bringing this classic to Blu-ray, and for furnishing it with an interview with Walter Hill, himself. The transfer is respectable, and does what it can with problematic original material. Let’s face it, this film could never look like hi-def gold, and the image we have here is a distinct improvement over every previous version that has been put out for home video. The close-ups can be terrific, and even someone like myself, who has seen the film a hundred or more times, can probably find little things that they’ve never spotted before. The audio does enough, but I actually wish that something of a remix could have been added as an alternative.

Southern Comfort is possibly the truest allegory to Vietnam that Hollywood’s ever put out. From the attitudes and insanity of the men to the ludicrousness of the conflict they find themselves in. Whether or not Walter Hill will ever come clean about this is largely irrelevant … but then he has also crafted a superbly atmospheric and tremendously exciting action-thriller, and it remains one of his greatest films. Walter Hill’s swamps fill the screen at 1.85:1 and slide through a sticky, muddy AVC encode that is never going to make you sit back and think how gloriously hi-def the whole thing looks. But, in all fairness, if it did shine … something would surely be wrong. To clean this up and make it look all spangly and new would be to do a massive Ultimate Predator DNR overhaul.

And we don’t want that.

The film is undeniably grubby, dour and bogged-down in a squalid mire of earthy greens, browns and greys. Whatever colour we get, it is slight and surrounded by murk. Blood-bags explode, so we get some little splashes of gaudy red, and the explosion of the Cajun cabin boasts a fierce fireball, but even this will hardly set the screen alight. The most colourful section of the film occurs in the village which dominates the final act set-piece, and here we get some robust blues – the dancing Cajun’s woolly hat - and reds – the thick real blood that we see gushing from the slain pig (which looks starkly different when compared to the fake stuff!) But the film is supposed to look grim and mushy and damp and thick with dirt and grime. I’ve never seen it look any different, and this is just what I expected. The aesthetic is hardly pleasing to the eye, but it remains completely faithful and, essentially, film-like. Skin-tones are realistically pale, and consistent. The varying shades of green and brown are also well adhered-to. The film may seem collectively bland, but this is not actually the case, as finite differences in character uniforms, and their degrees of distress, are well reflected by the transfer.

The image is soft round the gills. Middle distances fare reasonably well, but deeper backgrounds can lose distinction. One or two shots – namely those that establish the cabin of Brion James’ one-armed hunter, and its position in relation to the observing soldiers – are very poorly defined, indeed. These are highly stippled with thick grain, and look to be taken from a completely different and far inferior film-stock. Thankfully, they are only very brief and they are also part-and-parcel of the mud-spattered Southern Comfort, and have been prevalent on previous editions too.

And yet there can be frequent evidence of the improvements that this hi-def makeover provides.

For a kick-off, close-ups are often excellent. Facial detail is certainly better than seen before on home video, bringing out eye colours and skin texture, hair separation and stubble, and blood, sweat and tears. The uniforms are now much crisper and sharply defined with regards to buttons, insignia, zips, Velcro-fastenings, stitching, rips and material texture. There is a new gleam to the zips in the collar that hides the concealed hoods on the M65 combat jackets. The M16’s have more definition afforded their working parts and the spent casings ejected from them. A great close-up of Sonny Landham reloading his single-shot hunting rifle reveals far more nicks and smudges than ever before. If you want to scrutinise the leaves on the deck and the patterns they make on the muck, then you will certainly find it easier to do so with this transfer. The village sequence provides crowd scenes, lots of movement and plenty of shelves, pots and jars and bric-a-brac in the background. Their appearance is definitely sharper and the depth of the image is better. The misty grey shots of dawn – the knife-fight and the discovery of a hanged man – are far more stable than I’ve seen previously, with better contrast between the haze and the figures moving about within. There is no banding or noise taking place within the vapour. Black levels are stronger too, though this is not a film that relies too much upon them being stygian. Some night-time shots lack depth and come across as quite insipid but, once again, this is down to the photography.

There are things that look fresh and new, at least to my eyes. We can now see the little stream of blood that drips down the tree-trunk after one sobbing character is unfairly blasted and falls out of sight behind it. And, staying with the gore for a moment, we can now see the quite ghastly sight of steam rising off the gushing blood that comes pouring out the incision made in the belly of the slain pig. Bullet-hits are a little more pronounced as well – particularly the gobbets of brain that land on Poole’s shoulder as his head takes a pot-shot, and the three splattery squibs that explode upon one valiant but unfortunate Guardsman’s body.

Overall, I am quite pleased with how Southern Comfort looks on Blu. Digitally unmolested, grubby and raw – this is how it should look, and Second Sight have remained faithful to the source and the vintage.