It’s time for Bluetooth on a budget 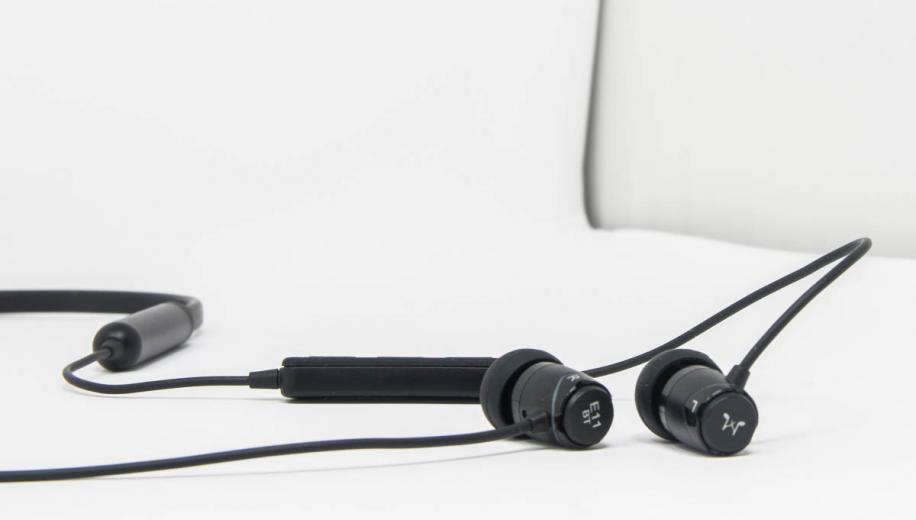 The SoundMagic E11BT is an in-ear wireless earphone. It is designed to take advantage of the slow but inexorable move away from headphone sockets and it does so at a rather more terrestrial price point that the wonderful but unquestionably pricey AKG 5005 that we looked at recently. In fact, this £50-150 point is now keenly contested as the sweet spot of money that ‘premium’ smartphone owners are likely to spend on boosting the sonics of their purchase.

SoundMagic is well placed to take advantage of this market. When they appeared in the UK a little under a decade ago, the product that really ‘put them on the map’ was the E10. This was an affordable earphone that sounded unreasonably good. I remember being given a set, trying them on a whim and them sidelining the rather more expensive earphones I had been using up to that point. The E10 sold by the bucketload and it is more than likely that quite a few E10 owners will now be casting around for a wireless option. There’s no shortage of competition though so does the E11 meet the weight of expectations or are there better options available? The E11BT is part of a complete series of E11 earphones that, in their own way, reflect that rather fragmented nature of earphones in 2019. The E11 is equipped with a conventional 3.5mm jack and there is an E11C then proceeds to add a remote and microphone to the cord. Then the E11D is fitted with a USB connector (and has its own amplification and DAC on board) as a wired means of handling a socketless smartphone. The E11BT then exists as a completely wireless option. It is worth noting that none of these variants can become another one - you buy one and stick with it.

All of these models share the same basic driver and enclosure. This takes the form of a single 10mm dynamic driver per side in a cylindrical housing. At the price, this is entirely what you would expect to find in an earphone but it is worth pointing out that after many years of being the poor relation to armature type models, dynamic drivers have been making their way further up the pricing ladder to near four figure price points.

SoundMagic claims a usefully flat response from 20Hz to 20kHz from this driver and thanks to the enclosure being closed, they leak very little noise to the outside world. The quoted impedance of 42 Ohms is a little unusual but this is fairly irrelevant when you consider that the E11BT will only ever be used with the amplification that it comes with. No information is given about the amplification but the good news is that there seems to be plenty of power. The Bluetooth fitment of the E11BT is a little different from anything I have previously tested and puts it in fairly limited company. The base fitment is Bluetooth 5.0 which is the latest version to be publically released. Of specific relevance to a device like the SoundMagic is that it is supposed to be considerably more efficient at data transmission which has benefits for battery life on both the transmitting device and the receiving one. Oddly, SoundMagic doesn’t give a battery life figure but at least 10 hours seems to be achievable. Charging is via USB micro A connection.

This should be a clue as to which device the SoundMagic is aimed at and the next feature is even more of a giveaway. The E11BT adds AAC Bluetooth support on top of the version 5.0 support and has this instead of Apt-X or Apt-X HD. Now, there are Android phones that have this fitment too - the Essential PH-1 I looked at recently being one - but the main family of devices that have a matching fitment are recent iPhones. The E11BT is a very cost effective way of getting the best out of one of these. Conversely, for many Android units, this isn’t going to be an ideal specification as Bluetooth 4 and lower won’t see the benefits of the newer version and Apt-X won’t be supported. Of course, there is no shortage of rivals that have Apt-X which is no use for iOS users so SoundMagic looks to have been quite canny here. Another useful extra is that the E11BT is rated to IPX4 in terms of water resistance. What this means in practical terms, is that if you are the sort of… ‘enthusiast’… who goes for a daily run regardless of weather, the E11BT is certified to withstand water from any direction. This doesn’t cover full immersion though so if you are a triathlete, you’ll need to spring for something even more rugged. Once again, this is a useful thing to find for less than £100. This resilience is backed up by a two year warranty, which is a nice feature at this price.

The E11BT is not the most visually dramatic device going but that isn’t necessarily a bad thing. The overall impression is of a great deal of black but this means that they are unobtrusive and unlikely to attract attention. I also like the attention to detail. The paint finish on the housings is good and everything feels solidly assembled. The microphone and control block is well placed to make and receive calls and there is a little robotic voice to tell you when the E11 has been powered up and connected. The rear yoke is a little on the thick side for my liking but it is comfortable and well designed.

In fact all the points of contact on the SoundMagic are comfortable and well thought out. The E11BT uses rubber rather than comply type fittings and while there are only three sizes supplied, these seem to cover the bulk of ear sizes and I have found the results to be very comfortable. I’m not really sold on the carry bag though. It’s rather large and doesn’t make for the most practical stowage device going. How was the E11BT Tested?

The E11BT has been predominantly tested with an Essential PH-1 smartphone which has both Bluetooth 5 and AAC support but some additional testing has been done via an iPad Air and an Onkyo DP-X1 to see what happens when you don’t have both these options available. Material used has included FLAC, AIFF, Tidal, Deezer, Spotify, some internet radio and on demand TV services. The review samples arrived brand new in box so were left for a few hours conversing with a Sony Xperia XA2 to give them some run in. Having done so, the very good news is that the qualities that made the E10 the all round bargain that it is, are still here in its successor. Listening to the rather excellent ‘Desert Electric’ playlist on Tidal demonstrates this to excellent effect. North and West African music is superbly rhythmic. Even when the tempo suggests you shouldn’t be moving to it, you generally are and the SoundMagic manages to capture this innate grooviness.

Some of this comes down to the use of a dynamic driver. With just one driver a side and the ability to generate convincing bass, the E11BT manages to feel light on its feet but produce a convincing level of bass weight at the same time. The low end is sufficiently controlled and detailed that it feels like a meaningful part of the music even when you are asking them to produce Kel Assouf’s Alyochan which is possibly the single most brilliantly odd fusion of electro dub and West African guitar music there will ever be. Also, possibly the only such collaboration, but that’s by the by.

No less impressive, given their relatively affordable price point, is the sense of space. Earphones are at a basic physical disadvantage to any other transducer when it comes to being able to generate a convincing soundstage because there is so little physical space between the driver and ear. By the time you throw £900 at the problem such as with the AKG N5005, there is true three dimensionality to the way it performs. At £70, the E11BT is more about being able to produce something that is not wholly two dimensional and that feels like it is at least partially happening in front of you rather than just on either side. This is balanced with tonality that is accurate with commendable refinement. Like other active headphones and earphones, the SoundMagic has the advantage of mating the amp to the driver at the design stage and this means that the E11BT is very hard to provoke even with the volume running at high levels. The edgy and forward No Tourists by The Prodigy is delivered with the impact and sheer drive that it needs to be convincing but it doesn’t tip over into being actively harsh.

All of these comments apply to using the E11BT with the Essential PH-1. If you have a device that supports AAC Bluetooth, the SoundMagic is a fine partner. Moving to the Onkyo DP-X1 - which in fairness is rather more likely to be used via the headphone socket but does have Apt-X Bluetooth - the SoundMagic is less convincing. Some of the vibrancy and punch that it shows with the Essential seems to be absent. It does serve to emphasise the point that if your extra Bluetooth functionality isn’t AAC, this might not be the choice for you.

The good news is that if you do have AAC, the other day to day aspects of the Bluetooth connectivity are all very good. Pairing is straightforward and assisted by voice prompts. Once you have paired up, the connection is impressively bulletproof. I have wondered at least five metres and two rooms from the phone while wearing them and there hasn’t been any form of dropout or interruption. Listening to them in London - where competing Bluetooth networks abound didn’t see any form of interference either. Call stability is excellent too - although the SoundMagic’s design does nothing to prevent you from looking like you’re having a conversation with yourself while you do so.

Wireless earphones are going to be a big deal this year. We’ve established that if you have £900 to throw at the problem, you can buy something truly superb - provided that you have an Apt-X source. Unlike the recent experiences with Bluetooth speakers, higher quality codecs do matter with earphones and given that a significant part of the phone market - for its own reasons - has not gone with Apt-X and this means that many of the devices in the market aren’t going to deliver their best.

This is where the E11BT comes into its own. This is a comfortable, capable and very well engineered solution for AAC Bluetooth users. The level of thought and care that has gone into the design is deeply impressive. If you need a sturdy pair of wireless earphones for a more than reasonable price - this is a great place to start looking and means this clever little earphone comes enthusiastically recommended.