The legend will never die... if anything, this fighting favourite is more alive than ever 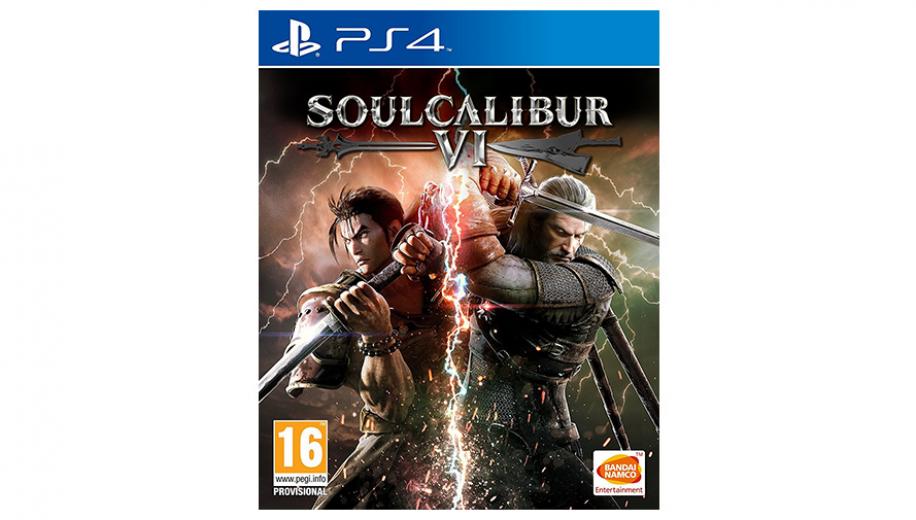 Welcome back to the stage of history, where fighting fans can grab their ludicrously oversized weapon of choice and get medieval on opponents of all shapes and sizes. It's been six years since the last SoulCalibur game and the battlefield for fighting games has changed considerably in that time, with season passes and ever-growing rosters now commonplace to help popular fighters enjoy longer lifespans. SoulCalibur VI's starting lineup of 20 characters – 17 returning veterans, two new faces, and the series' most appropriate guest star to date, Geralt of The Witcher fame – is about the norm for the first new release of a generation, and it's safe to assume that many notable absentees will rejoin the battle down the line, with popular lunatic Tira already available as the first additional character.

Building on the mechanical changes made in the last game, SoulCalibur VI reworks the Soul Gauge to refine meter use. Most characters get just two options here – either a canned Critical Edge super move or the new powered-up Soul Charge state, both of which cost a full bar each. The latter is the more complex of the two, with each character gaining unique benefits and abilities during Soul Charge to allow experts to string together even flashier chains, while the former is a one-shot nuke that anyone can call upon to close out combos with big damage or simply use as a panic button when things get a bit hairy. The Guard Impact parry now no longer costs meter and can be used freely, leading to some awesome mind games during back-and-forth parry-offs as players attempt to delay and mix up their attacks in order to break one another's rhythm. On top of this, SoulCalibur VI introduces the Reversal Edge – a clash mechanic initiated with its own two-button parry, leading to a sort of rock-paper-scissors stand-off. While this feels a little random at first, you quickly realise that it's no mere guessing game. Each character gets different follow-ups for winning a clash with their horizontal, vertical or kick attacks, and reading an opponent's intentions can allow you to blunt their scissors... assuming they aren't trying to psych you out by picking a less beneficial option. It makes for a great addition to the spectacle, and you can always choose to play safe with guarding and movement options during a clash if you'd rather not be drawn into a risky battle of wits. It's no mere guessing game

While not the prettiest fighter out there, SoulCalibur VI at least looks fairly good for the most part, its crisp and clean base visuals augmented with plenty of pyrotechnics to make every clash something to behold. There's a fair bit of clipping (particularly with custom characters) but given the game's pace, it's hard to notice most of the time outside the most egregious examples. Audio sits on a much broader spectrum, the suitably epic orchestral score at the good end and the in-battle dialogue firmly at the other. We're used to fighting game characters talking rubbish during bouts, but the bizarre and totally unnatural staccato delivery of that waffle here is so bad that it descends into accidental comedy. It's like none of them are capable of forming complete sentences, delivering their lines piecemeal with strange pauses where they make no sense. Astaroth's Critical Edge is pretty rubbish, for instance, but it's worth cracking out for the so-bad-it's-good supporting dialogue – we still try and land it from time to time just to get a chuckle out of hearing him yell “STOP MAKING... THAT NOISE!” at an already-silent opponent as he chucks them around like a rag doll.

Like its predecessors, SoulCalibur VI has a wonderful accessibility about it. Controls are logical, move inputs on the whole very simple and similar across most characters, and anyone can pick up a controller and start pulling off impressive attacks right away. Things like the generous parry window and cinematic nature of Critical Edge and Reversal Edge techniques means even the simplest of battles can turn into a true spectacle, which helps keep the focus on the fundamentals – something that's extremely important in a fighting game. Optimising combos for maximum damage will still be important at higher levels of play, naturally, but a combo fiend whose fundamentals are weak will lose to someone who is better at the basics but uses just simple counters and punishes more often than not. Characters like Nightmare and Astaroth are able to put out absurd damage if you let them, so learning to read and react to attacks is crucial, as is mixing up evasion, parries and interrupts to keep foes on their toes. The new Lethal Hit system plays into this brilliantly, granting certain moves unique counter hit-like properties when certain criteria are met and creating openings for potent combos for those who can exploit their foes' weaknesses with the right moves for the job. SoulCalibur VI has a wonderful accessibility about it

Fans of the quest-style single-player modes of older SoulCalibur games will love how SCVI's two main solo modes work in tandem. Soul Chronicle is the traditional story mode, with one overarching tale to play through before picking any of the other fighters and running through the events from their perspective. Libra Of Soul, meanwhile, is more like the Edge Master mode of old – you roam the land fighting under various special conditions, levelling up, and building a collection of increasingly potent weapons. Here, though, you play as a custom character caught up in the events of the main narrative, with your choices defining whether they become a hero or a villain and the experience changing slightly accordingly. Both modes are epic in scope and tie into one another neatly and despite a few weak narratives in Chronicle and some dreadful modifiers in Libra (slippery floors are the worst), there's still hours and hours of entertainment here for when you don't want to go toe-to-toe with other players. Rounding out that side of the package is a simple Arcade mode and a rather weak training mode – while there are brief lessons on the key strengths of each fighter, they're just walls of text and their non-interactive nature makes them less useful than similar but more hands-on versions in other fighters, be it the Trials of Street Fighter V or the all-encompassing tutorials found in most Arc System Works fighters like BlazBlue and Guilty Gear.

It's always hard to get a handle on balance after just a few days with a new fighting game, but the fact that no character immediately stands out as being either horribly overpowered or completely useless is a promising start, if nothing else. The game's tight core systems mean there are universal answers to a lot of situations available to all characters, creating what feels like a pretty level playing field from the off. Each character has a clear optimal range based on their weapon of choice – Ivy's whip-sword is hard to beat at long range, slower characters like Nightmare and Astaroth can close distance safely with armoured attacks, while the likes of Taki and Maxi can dominate the close game with loads of cheeky high/low mix-ups. There's a fantastic diversity to the weapons on display, and indeed to the cast itself (even if some of the more questionable outfit choices don't do the game many favours on that front), and that makes for plenty of memorable match-ups. There are universal answers to a lot of situations

SoulCalibur VI is one of the most accessible fighters out there, both a fine return to form that returning fans will enjoy and a great entry point for people wanting to get into one-on-one fighters.

The online suite could use a little attention – a quick rematch option for two-player Casual Match lobbies in particular would be a godsend – but netcode seems pretty solid for the most part, and there's plenty to do offline if you'd rather not take on the world.

Beginners can pick up the basics and a few key moves and do fairly well with just that, while there's enough depth to the systems to keep experts interested in the long term as well, and to give those willing to learn something to strive towards.

A heroic return indeed for one of gaming's most treasured beat-'em-up franchises, and we look forward to seeing how the game grows and evolves as its epically retold power struggle rages on.