A game full of wizard ideas 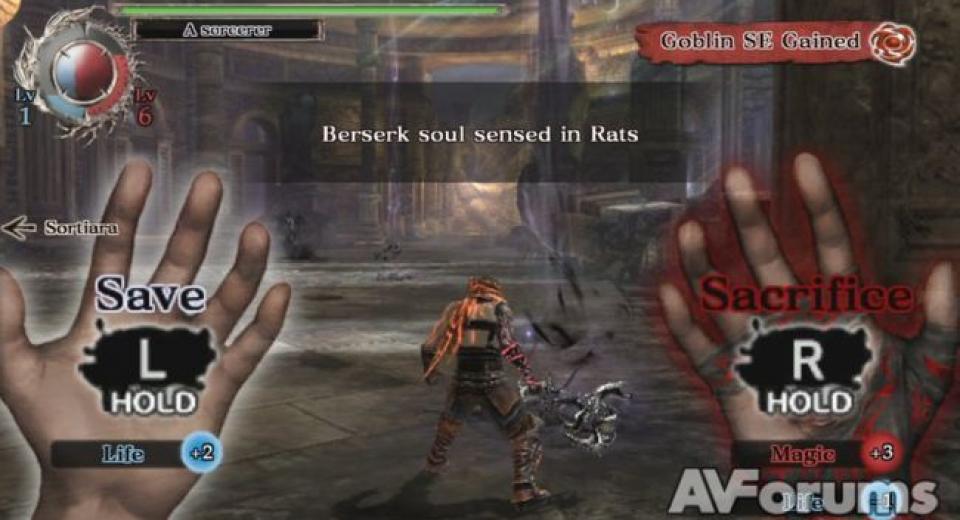 A Japanese role-play game involving a talking book, a mature apocalyptic storyline and frenetic real time combat; this may sound like a description of Cavia’s underrated NieR, but it is in fact the latest product of the mind of Keiji Inafune. Where previously he’s delved into the darker realms of grotesque beings - such as Dead Rising and Onimusha - there’s always been a lighter, slightly playful tone to proceedings. You may see the odd splash of colour in Soul Sacrifice but make no mistake this is pure malevolent melodrama.

Coming as a collaboration between multiple studios (Sony’s Japan Studio, Inafune’s post-Capcom fledgling Comcept and Marvelous AQL), the worry that the strands of an RPG may not weave together seamlessly when so many cooks are involved is offset by some clever streamlining, which largely emanates from the story and its surrounding mythology. The world has gone to ruin, devastated by a villainous sorcerer by the name of Magusar. Skeletal cages stretch to the horizon and your turn will come soon. Whilst awaiting your grisly fate a sentient book, Librom, knocks up a conversation - as you do. Within his pages is the journal of an unnamed sorcerer and hopefully the key to defeating Magusar. You relive and reenact the memories in the form of “Phantom Quests”, battling demons, recruiting allies and ultimately gaining power in the traditional genre manner of accumulating experience points and a devastating arsenal.

In terms of presentation it's genre standards of shadowy levels mixed with bright plains, and a display that focuses on your health bar, overall level and weapon load-outs. The surface textures can be sketchy, but there are some nice motion and lighting effects, emphasising the feel that this is a game to be enjoyed most in the thick of battle, sword in hand.

There are no blacksmiths to forge steel, rather weapons are conjured from “offerings”, a variety of items collected from downed demons which - due to your magic abilities - can bestow you with an ethereal armoury. The downside of this hocus pocus is that offerings have a finite amount of uses and need to be recharged during fights if they aren’t to be broken and lost. There’s a nifty few to be experimenting with, varying from Popeye-like arms of fire and elemental blades to thorny projectiles and summoned golems.

Experience points have a similar twist, and aren’t simply amassed into one uniform category; with each foe reduced to an emulsified mush you are offered the option of saving or sacrificing them. If you’re a do-gooder you’ll be rewarded in the moment with some health and if you err on the bloodier side of judgement your offerings will be recharged for further use. As this process is repeated, the light/dark balance that takes a hold of your right arm has a further effect. Sigils can be carved into the arm for stat buffs, but their use and efficacy are dependant on where you fall on the scale. Soul Sacrifice is a fairly unique mix of fresh ideas and genre tropes. The path of righteousness or vengeance is a cliche, but the way in which it is represented - with a portrayal of demons as tortured souls, both monstrous and tragic - is far more interesting. Where other games offer the choices, but steer towards a gentle inclination depending on whether you wish to favour defence or attack power, Soul Sacrifice appears to will you to end up on one end of the spectrum rather than dilly dally in the middle, and as you start to sway one way or t’other, you soon build up weaponry and sigils that become mainstays of your combat approach.

The whole theme of choices and the sacrifices that have to be made steadily evolves, but for all the growing sense that this may be cut from the same cloth as other perma-death, fast auto-saving games that burn the bridge after you, Soul Sacrifice keeps handing players get-out-of-jail free cards that undermine the hardcore posturing.

The much hyped element of the game is the ability to sacrifice a part of your own body by way of a “Black Rite” when death is looming down on you. The first example you use is the summoning of a huge flame deity that burns all and sundry at the expense of your own immolation and the subsequent permanent reduction of your defence. Neato! Only, it’s not that permanent. Librom routinely prompts you to dab at his eye - fair enough, he’s got no hands - which gives you “Lacrima”’ a liquid capable of erasing certain things written in the journal, such as the effects of Black Rites. So, for all the intent behind decision making, the end result is that should you find yourself damaged by a Rite, losing an ally because they don’t favour your light/dark allegiance, or even want to completely redress the balance of your right arm - turning it from Dark to Divine - Lacrima’s your best friend.

Thankfully it’s not a substance that accumulates terribly quickly, so you must at least learn not to be reliant on the use of Rites. This means powering up by grinding, and there’s a lot of it. Because you’re trapped in a cage and merely reading pertinent quest entries in a journal, the decision to avoid any general wandering or distractions such as side-quests is not as jarring as it may sound. You jump straight into the action, landing in one of a selection of arena-like mini-maps that contain a variety of demons that must be slain. Think of an emo Monster Hunter and you’re on the right track.

There’s little in the way of variety, quests fall into either extermination or find-it tasks that utilise the “Minds Eye” ability which highlights points of interest in the level and on enemies. It does get repetitive, and the evolution of offerings isn’t anywhere nearly as addictive a lure as fashioning some uber-bow and armour from the remnants of a gigantic beast, but the atmosphere and world created is a rarity: brooding, tragic, dystopian and every bit as harshly pessimistic as the game it bears several bullet points with, NieR.

There’s lore to be explored and Librom flicks back and forth like a real book; this atmosphere is complemented by the ominous soundtrack which is a brooding success of choral wails and ominous resounding notes, fittingly wrapped in orchestral pomp, half opera, half funeral dirge. However the fly in the ointment is voice acting that has more ham than a butcher’s window. The pauses in narration are interminable; five seconds between over-acted lines just emphasises the impression you’re listening to a B Movie actor trying to summon meaning from the script. Even with this minor annoyance, the scales fall resoundingly towards the positive, with the game finding its place as an addictive story-driven action-based RPG, happy to ask the gamer to grind, and giving enough options to tinker with and signs of progression to make it seem a welcome proposal. Building a team of allies with the AI is enjoyable, even if they lack finesse, but once you get past chapter six and unlock network functionality, jumping into multiplayer sessions of demon-battering becomes a habit that’s hard to kick.

Soul Sacrifice purports to lay out tough decisions for you, but it swerves the Demon’s Souls “hardcore” tag by keeping a get-out-clause that can be utilised by anyone who puts in the hours. Skill and dedication are still required, but the combat is fast and progression multi-layered enough as to always hint at some new depth during longer sessions.

Due to the small arenas and plethora of bite-sized quests, quick blasts with other gamers negates a certain amount of repetitiveness. It may not repay players in the same way that Monster Hunter does when a large foe is downed, but the evolving story and well thought out mythology have enough mystery to keep interest piqued until you’re well and truly ensnared.