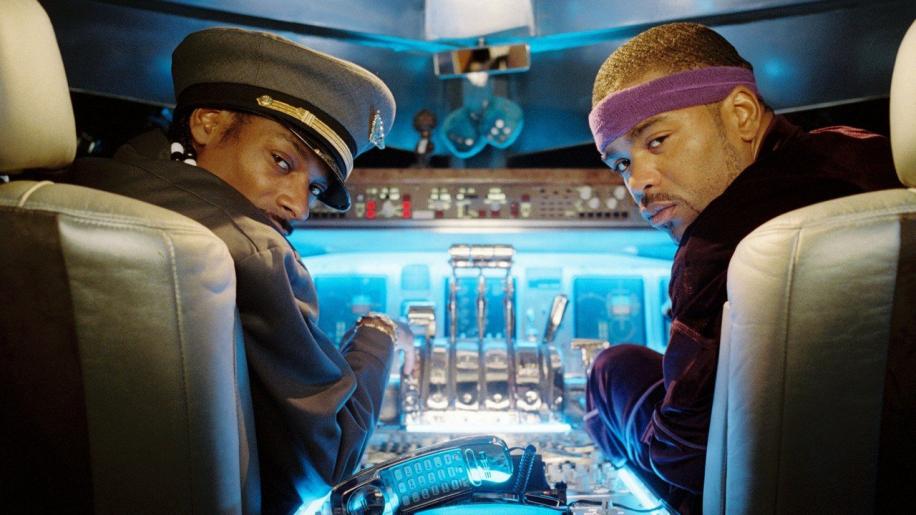 Picture quality is very good. Framed 1.85:1 anamorphic widescreen, the move has rich, warm colours and plenty of detail. Take a look at the screen grab of Snoop Dog (who plays Captain Mack, the pilot who is afraid of heights) while he is giving his passenger welcome. His skin tones are beautifully clear and subtley shaded, and the grille over the microphone shows immense crisp detail. This 'plane itself looks like a bar of Cadbury's chocolate both inside and out, but the purple and chocolate hues are excellent and without smearing, blocking or edge enhancement. The soundtrack is a DD 5.1 affair recorded at 448kbps. The score is a collection of raunchy, throbbing R&B and hip-hop. As such it bangs out the bass, but it lacks power and punch and although deep, is a little sloppy. Vocals are clear and contained within the front soundstage, and are occasionally a little swamped by the ambiance and effects. There is no use of the split rears or indeed of the whole width of the front soundstage, except to provide background noise for example in the party scene towards the end of the movie, or in the airport terminal at the beginning. Given the excellent music this is a bit of a shame. Extras are extensive and while not special or outstanding in any way they are generally interesting and insightful. We begin with a 25-minute “Making Of “ featurette. All the actors contribute interviews, as well as the director. It is innocuous but fun and just avoids typical fluff.

The Upgrade is a short featurette about Jessy Terrero. His background is as a video director and this does show in the movie. The excellent visuals have a lack of narrative and focus, and don't hang together well. This featurette consists of further interviews with the actors, generally heaping praise on him, and a few words from the man himself on how he approached his first feature. At 5 minutes long it smacks of padding.

There is a feature commentary by the director and actors Kevin Hart, Tom Arnold, Godfrey and Gary Williams. This comes across as a group of guys watching a movie and saying how funny each other was. It does have a few amusing highlights but they are not worth watching the movie again for.

The disc is rounded out with four deleted scenes, two minutes of outtakes of the corpsing variety, a behind the scenes photo gallery, and the excellent “Survivor” safety video. Picture, sound and extras are all a notch above average but the movie itself is so far below average that you can't see it with a telescope. Not only does Soul Plane lack soul, it also lacks a heart and a brain. Leave this one on the shelf.