Helping you find your spark at Christmas 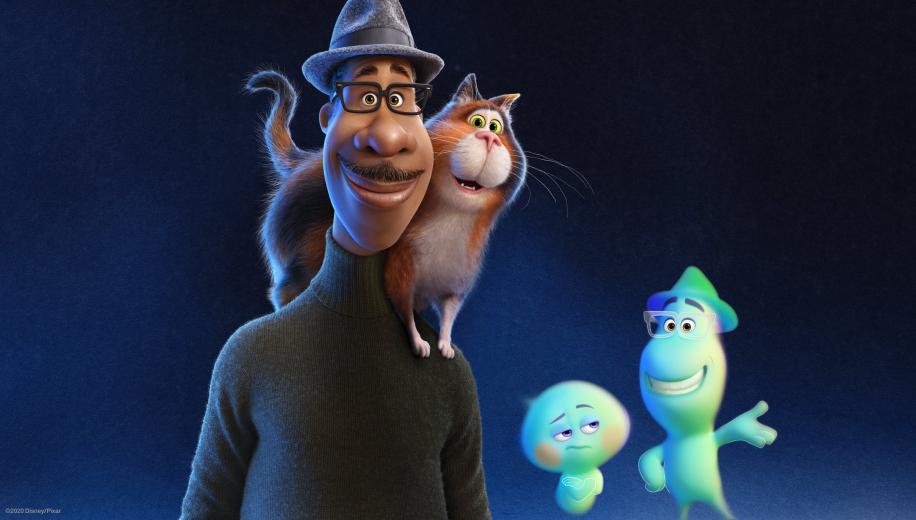 Hitting that perfect emotional note once again, this sublime visual and tonal companion-piece to Inside Out sees Disney/Pixar dig deep for further reflections on mortality following their excellent work on Onward and Coco.

After perhaps ill-advisedly charging audiences for early access to Mulan, Disney didn't make the same mistake twice for Christmas, serving up their intended theatrical fare, Soul, as a Christmas Day treat for those with Disney Plus. Of course this undoubtedly also led to plenty thinking it was just another failed feature which was being dumped on streaming, but Soul is anything but - it's the kind of flick that would have won the hearts and souls of young and old audience members across the land with a theatrical bow, and undoubtedly benefited from the positive word of mouth that would have spread.

Whatever magic Disney/Pixar have in their recipe for filmmaking, it continues to be evidenced almost universally in these animated features, with Soul once again capturing the spirit of untapped cultural resources, exploring avenues previously underserved - who'd have ever thought jazz would make it into a kids' movie - whilst also exploring astral plane levels of higher thinking (which even Interstellar struggled to visualise) and packaging it all up in a poignant reflection on mortality and purpose in life. Sorry, this is a kids' movie, right?

This is an eminently adult affair, only dressed up in all the incandescent neon trappings of a Pixar animation

Middle-aged middle school music teacher Joe still dreams of a career in jazz, feeling that he just hasn't achieved his purpose in life. But just as he thinks he's been given his shot at the Big Time, he finds himself trapped in a soul station, inadvertently getting lumped with a mentoring position: having to find the spark for a tenaciously defiant young soul, who insists she simply has no purpose.

Soul has some fabulous ideas. It doesn't merely settle for the opportunity to embrace "Pixar's first movie with an African-American protagonist", instead diving headfirst into the innovative, improvisational insanity of jazz, and then taking on metaphysical concepts on mortality, before ultimately landing on a deliberation on what exactly a soul is - what is it that gives your life that spark?

This is an eminently adult affair, only dressed up in all the incandescent neon trappings of a Pixar animation, affording a child's eye perspective on the things we miss out on in everyday life which can bring so much joy, and even an opportunity to reconsider your preconceptions about what exactly your purpose is in life. Indeed, after digesting the full narrative, and the final decisions there, it's hard not to get wrapped up in the story, and forget that this was always designed for families and younger children to absorb, with adult audience members possibly demanding a lot more darkness than this medium was ever going to deliver. That's understandable, but the flip side is that no other studio would take an ostensible kids' movie to tackle these complex topics.

How exactly do Pixar manage to find that perfect note?

In terms of voice cast, Jamie Foxx is pleasantly unrecognisable in the atypical lead role of Joe, playing well opposite Tina Fey's trainee soul, whilst Angela Bassett's powerhouse jazz sax legend is superb, with the likes of Daveed Diggs, Phylicia Rashad, Richard Ayoade, Wes Studi, Alice Braga and even a tolerable Graham Norton rounding out the superb cast, but it's a testament to Pixar's pitch-perfect filmmaking that you don't really think about the vocal talents, and instead embrace the characters they bring to life.

Gorgeous in Dolby Vision on Disney+, Soul goes for broke in its unusual (as if there is a 'usual') depiction of soul stations and soul management, as well as the higher planes achieved by getting lost in what you're doing (like playing jazz), whilst it ultimately hits those emotional notes that it has now become synonymous with, blindsiding you with a powerful end run where the visuals, music and message comes together seamlessly to leave you struggling to avoid letting a tear fall. How exactly do Pixar manage to find that perfect note? Well that's perhaps the subject of an entire movie to itself, but Soul is evidence of them once again striking gold, and is one of the best new movies you'll have the opportunity to investigate over the Holiday period.

Soul was released on Disney + on Christmas Day and is available under your Disney + subscription.
﻿