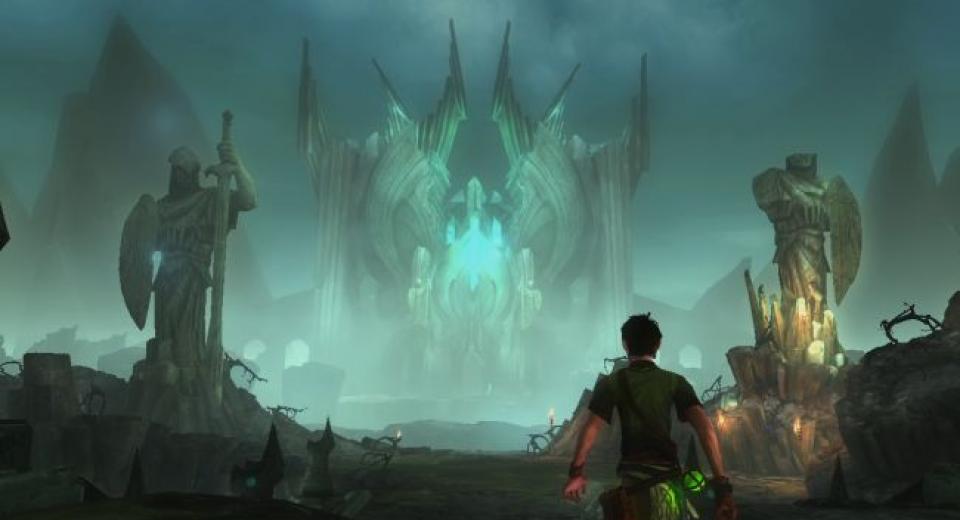 The whole witches and wizards genre has ballooned in success from the early 2000’s ever since J.K. Rowling created her mystical world of Harry Potter. Since then it seems that everyone, regardless of belief and taste, can enjoy this genre and unite in mass debate and excitement when a new title or series is released. But now the established series has drawn to a close, where can we turn for our next fix of wand-waving and spell-casting?

Well for gamers, it seems that Santa Monica Studios are riding this wave of success by pushing out their latest offering; Sorcery. The clue is in the title for this new IP as it promises to offer up a heap of wizardry and mischief in abundance. This is also a PS Move only title which surely can only add to the belief that you truly are a wizard, but then again it could prove to be nothing more than a gimmick.

As it goes this genre is pretty much open for anyone to have their own spin on things in terms of spells, characters and the world in which they exist but here things start off in a familiar fashion. Protagonist Finn, a sorcerer’s apprentice to Dash, finds himself alone in his master’s home with his feline companion Erline and they soon get themselves into all kinds of mischief. How? Well after many unsuccessful attempts at casting spells and potions, he decides it’s time to crack open the wand in Dash’s room. By now you can probably tell where this is going.

You kick things off by simply moving objects and destroying crates around the homestead but soon your curiosity gets the best of you and you find yourself confronted by enemies from other planes and worlds. From there on in, the game unravels itself nicely, like an intricately weaved spell and intrigues you enough to keep you playing and push further onwards. Charmingly, your enemies have been tagged with the title ‘Bogeys’ which could be a reference towards the military term or a way of giving younger gamers something to giggle at. Whilst the game begins in a slightly predictable way, it does have enough variation in its character design and story revelations to keep things fresh and interesting. Take the interaction between characters for instance, as it is quite brilliantly done and, thankfully, is something we are seeing more often in games today. It seems that the days of poor scripting are gone as here characters bounce off one another with banter, all of which is brilliantly timed.

To complement this blend of interaction and banter, new features are introduced to you at the right moments in order to keep things ticking away nicely throughout the campaign. Just after you have mastered each new spell or mechanic, you are given a brand new one to try and perfect shortly before being introduced to the next one. New enemies are introduced at these points too to get the message across that each requires a different tactic to take them down. So when you acquire your ice spell, expect fire shamans to make an appearance and vice versa.

The game plays out in the third person perspective which suits it perfectly when it comes to the character control and spell casting via the Move controller. As expected, the Move controls are pretty much spot on and it works as well as it has done previously, if not better. Spells are cast by flicking the controller in the desired direction which works a treat and makes the game feel really slick.

It seems that Sony have finally found a game that suits their fancy controller at last. Despite the camera’s best efforts to get in your way and hinder your adventure, there is little to wholly affect your experience when it comes to controlling Finn. The levels and environments you come across are well designed and varied enough in terms of the tactics you need to take into each in order to clear them of adversaries. At times, it feels more like a medieval cover-based shooter given that long distance enemies will hide behind obstacles and hurl attacks at you from behind them. Your reply however is the curved spell which allows you to throw spells around objects and root out problem foes.

There are moments however when your spell casting seemingly goes unpunished for repeated fire. Your more powerful spells such as the elemental ones are limited to short bursts; however your standard arcane bolt can be popped off in unlimited quantities. At times you feel like a magical machine gun as your reliance on the basic spell becomes too heavy and you’ll be firing shots off left right and centre.

In between the sections where you are picking off the small fry, you are greeted with boss battles that will test your abilities to dodge, block and cast in order to topple them and their extended health bar. Blocking is something that is a must at times, as is the dodge ability, because sometimes you cannot worm your way out of the firing line. With a squeeze of the L2 trigger you can cast your shield until it wears out in an attempt to thwart incoming attacks. The interaction via the Move wand isn’t limited to spell casting as you can engage in smaller tasks by waving your controller in the air. Opening chests, unblocking passages and brewing potions all require a different motion gesture. Chests are opened by rotating the end of your controller, passages are unblocked with a swipe and potions can be brewed as if you were sitting next to the boiling cauldron yourself.

Consuming the end result of these brewing sessions is quite entertaining too having to shake it up first then tipping it over as if you were to neck your beloved motion device. The ball even glows the same colour as the potion that you are about to drink; magic. See what I did there?
These potions are the main ingredient (last one, I promise) to levelling up your character and granting him new abilities and attributes. Ingredients for these can be found by exploring every area that you enter and also by purchasing them off the travelling merchant who makes a regular appearance throughout. Collecting gold funds your alchemy habit which can be found inside chests and broken obstacles whilst selling any treasures you find will also bring you plenty of coin.

For anyone who has been waiting for an excuse to shout out about their motion control device, and actually be proud about doing so, then rejoice because Sorcery lets you do so. It’s a great, niche title that showcases how well the Move can work when it is implemented correctly and how interactive gaming can be because of it. For anyone who loves the genre, or wants to see how well Move can work, then it is well recommended.

Sorcery will probably be ignored by the majority of gamers out there given that it is a Move exclusive title and, thus far, these haven't been great but finally there's a title to break the mould. The Move works excellently as it has done in many previous games and it feels more-or-less perfect when considering the type of game this is. The script has been written perfectly and the dialogue and story flow in a way that makes you want to carry on until completion. With a bunch of collectibles to find and plenty of potions to brew and consume there's heaps of longevity to it too.