The display looks spectacular – incredibly detailed, as you might expect from the 643 pixels per inch resolution. 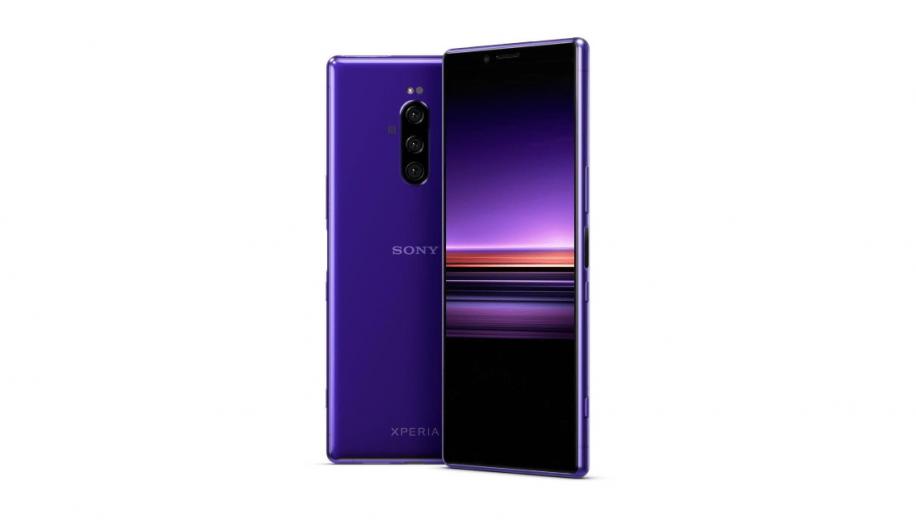 What is the Sony Xperia 1?

It’s the latest flagship smartphone from Sony Mobile, and also the latest phone to follow the trend of elongating the screen so it’s longer and narrower than usual. Where 16:9 was the familiar screen ratio for years, now, handsets are moving to 18:9 ratio, or 2:1.

This phone goes further, with a beautiful OLED display that’s 21:9 ratio. If you’re familiar with Philips TVs, and of course you are, being an AVForums reader, you’ll remember that this was the shape of display used in its 21:9 range, representing full widescreen movies, and so ideal for watching films as the director intended.

So, this is a narrow, long phone that manages to squeeze in a 6.5in display while still fitting the hand easily. This is also the phone that is Sony’s first with three rear cameras, a big break with the styling Sony has used until now, which in previous years has focused on a single camera with a high-resolution sensor of 19MP or more.

Now, there are three 12MP sensors with different focal lengths, offering wide, telephoto and ultra-wide views. Well, since the display is ultra-wide, it makes sense that there’s a camera to match.
The display, as we’ll see, is pretty unusual, with 4K resolution and HDR compatibility. That, by the way, is way more than those huge 21:9 Philips TVs ever managed.

Oh, and this phone sees a return of the fingerprint sensor to the edge of the phone – it’s terrific, by the way. The long OLED display means the phone looks different from any others on the market. Both in the case of those TVs and this phone, the super widescreen aspect ratio takes some getting used to. Personally, I really like it. It’s tall and elegantly slim, and the unique shape is part of its appeal.

The display doesn’t cover the whole of the front of the phone, thanks to a camera and speaker at the top edge and small area of blank space at the bottom. But these black areas pretty much disappear, thanks to Sony’s cleverly designed wallpapers. Still images, in some cases, open into place with an animation and subtle darker areas at each end. It also means there’s no notch or peephole camera in the display – it’s a pure oblong with gently curved corners and nothing missing.

It feels good in the hand thanks to the Gorilla Glass which covers front and back and the aluminium frame in between. The joins between the different materials are super-smooth, so you can roll the phone through your hands as though it were a worry stone – something made even more appealing thanks to the slim width of the phone.


It’s tall and elegantly slim, and the unique shape is part of its appeal

Though the back is glass, there’s no wireless charging on this phone. Sony has put it in previous Xperia handsets but the thinking seems to be that the slimness was important here and it didn’t want to compromise that by adding a charging coil.

The three cameras that run down the back of the phone are centrally placed in line and look great. Unlike the Nokia 9 PureView with its cameras flush to the surface, these are raised.

There are plenty of buttons on this phone, more than you usually find. As well as the inevitable volume rocker button and power button, there’s a dedicated camera shutter and the fingerprint sensor that we’ll come to in a moment. The shutter button is useful – it wakes the camera quickly and is ready to shoot.

Colours have regularly been a strength for Sony and there will be four shades for the Xperia 1: white, black, grey and a very fetching purple. My review sample came in the gloss white finish which looks great and makes an attractive connection to the aluminium edge and black-bezeled front.

Some previous Sony phones mounted the fingerprint sensor on the edge of the handset, in the power button. It was a brilliant piece of engineering that worked wonderfully. After all, you’re often touching the power button so it’s a great place to have it.

However, for legal reasons to do with permissions in different territories, Sony couldn’t use this technology in the US, so the phones came without a fingerprint sensor there. You had to unlock your phone with a passcode Stateside.

This new system, available everywhere, is positioned just below the power button, so it’s still a natural place for your thumb or finger to fall. It’s fast and responsive and because it’s as narrow as the phone’s edge it takes up almost no space.


It was a brilliant piece of engineering that worked wonderfully

Setup is straightforward and much faster than on many rival fingerprint sensors. In use, the sensor is reliably accurate and works very nearly every time. It’s fast and responsive, and the sensor is placed well so that as you pick it up, your right thumb tends to hit it automatically, waking and unlocking the screen in a trice.

Touch it with the wrong finger when the screen is awake but locked, and a delicate animation shows you’ve made contact with the sensor but that hasn’t been recognised.

It’s worth saying that I’m right-handed and it’s perfectly positioned where a left-handed person might find it less elegant to use – I enrolled my left index finger from an acute angle and it worked perfectly. The display looks spectacular – incredibly detailed, as you might expect from the 643 pixels per inch resolution, way higher than pretty much every other phone.

Its brightness is about the only disappointing thing, it’s just not as bright as some of the other phones around. Perhaps that’s partly because it’s an OLED screen.

The 21:9 display is a strength and a weakness. For sure, when you’re watching something in the right ratio, and there’s a lot that is, it looks pristine and rich, but since you’re often going to be looking at something with 16:9 ratio, you have to be ready for a big letterbox effect.

The long screen means you can have two apps open at the same time and there’s enough space for this to look good.

Sony has a Creator Mode which lets you customise the look of the display, bringing home the fact that the screen has been developed and calibrated in conjunction with Sony’s TV division.

Get it just right and a side menu of eight apps appears, with a shortcut to more. It’s designed so that with time it will learn the apps you choose and can serve them up automatically. You can also quickly turn Airplane mode on or off, toggle auto-rotate and access Wi-Fi controls.

This is also where you can invoke one-handed mode which shrinks the display and shifts it to one side or the other so you can control everything with one hand. The truth is that this feature, introduced on an earlier Xperia, is less useful here because the screen is narrow enough to be manageable with one hand anyway.

There’s also a shortcut to 21:9 multi-window, where you can view two apps simultaneously. Having two apps open one above the other also took a little getting used to but looked just great and was genuinely useful. A widget on the home screen is also available to let you launch the two apps. The feature is flexible enough that you can adjust the two windows: half and half or one-quarter and three-quarters. The three rear cameras sitting in a line can deliver very strong photos. To be clear, good though this camera set-up is, it’s not as powerful or effective as the Huawei P30 Pro, but I’d say that’s the best camera phone around right now. So, comparisons aside, how good is it?

The three lenses work together well, switching seamlessly from one to the other as needed. The main camera has a 26mm focal length, a 52mm lens offering an effective 2x optical zoom and a 16mm wide-angle camera which is effectively 0.6x the main camera. This last lens doesn’t have optical image stabilisation but the other two do. The pixels are slightly bigger on the main sensor - bigger pixels allow better and faster light capture.

There are useful manual overrides to allow you to take better pictures, including white balance tweaking after you’ve shot. Plus, lots of effects including portrait selfie (blurred background, sharp subject) or Augmented Reality where you can add dinosaurs to your photos, for instance. Really.

Low light, the historic nemesis of cameras, is less troublesome than on many cameras. More light is better, of course, but you can still come up with decent results with little light available. Some other phones do well in low light, but sometimes it can mean the images are brightened up so much it looks like you shot in daylight. That can be good, or it can ruin the effect. Here, the images seem truer to the situation you shot in. Just as the display was developed in conjunction with Sony’s TV boffins, so the camera division has helped add extra features to the snapper. So, an eye tracking effect means the camera will focus on the eyes of your subject, so you can be sure the face is in sharp relief.

Since this is a 4K screen, you can record movies in 4K HDR resolution and play it back on the screen, where it looks tremendous. Advanced video features, also designed with the help of other Sony branches, allow you to shoot with or without high dynamic range, and with other effects, for instance.

The dedicated camera button on the low edge of the right side is very useful. Though other phones have useful shortcuts to launch the camera app, this is the most intuitive. Long-press the button and the camera opens. Usually, it does this very fast, though occasionally there’s a little bit more of a lag than you might like. That slow responsiveness sometimes happens when the camera is in use, too, but it’s pretty rare overall.

The latest flagship smartphone processor, the Qualcomm Snapdragon 855, is inside the Xperia 1, which is why it’s such a fast performer, routinely keeping everything going whether you’re watching video, browsing or gaming.

As mentioned above, there are very occasional hold-ups when launching the camera or switching from one lens to the next. Sony has been managing battery life well for years now, both for getting the battery to last a full day and in terms of conditioning the battery over its lifetime. It does this by charging more slowly overnight, which increases the battery’s overall longevity.

Here, there’s a good day of useful battery life available, though not two days. Sony has achieved this in the past, but a 4K screen takes its toll, obviously. Realistically, since overnight charges are needed, it maybe doesn’t matter whether you have 10 per cent battery left at the end of the day or 30 per cent, you’re still letting it recharge while you sleep.

there’s a good day of useful battery life available, though not two days

When I first saw the Sony Xperia 1, I wasn’t sure about the way it looked. So narrow, so long. But the look grew on me and the way it fits the hand clinched the deal.

The display is outstanding, even if you often have to watch stuff with black letterboxing. And it means video looks exactly as you’d expect it when you’re shooting in 4K. Still images are good as well and the camera is versatile and well-specced, even if the all-conquering Huawei P30 Pro still outguns it.

This is an elegant, attractive and highly capable phone.