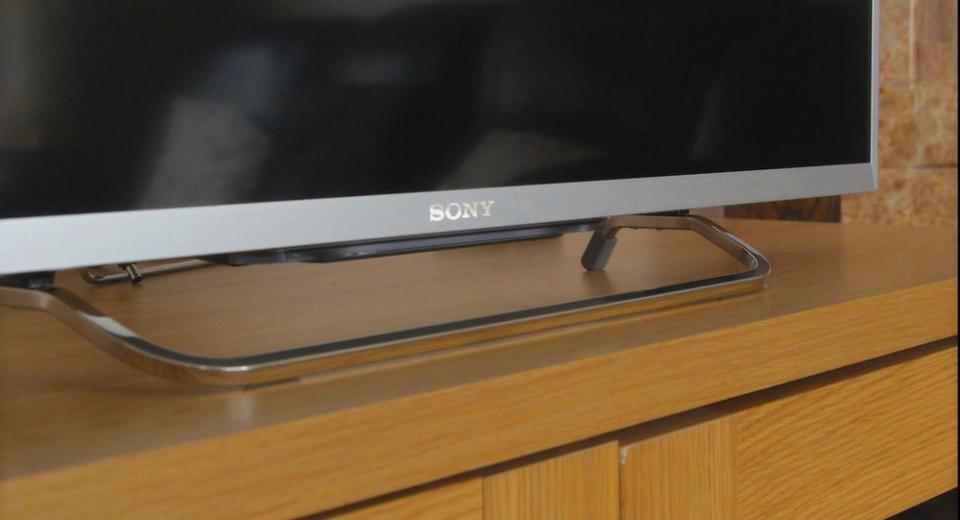 Room for a little one?

Sony’s 32W706 is a bit smaller than the usual samples we review but 32-inches is as big as many will ever want, we’ll stop short of saying need! But just because it’s wee doesn’t mean it’s not packing a whole host of features and fairly high-end specs. Internally, the W706 appears to be identical to the Sony W705 but they have different coloured bezels and the 32-inch is joined by the 50W706B and KDL-42W706 in the range.

The W706 is part of Sony’s push to improve the audio quality coming out of flat panel TVs and features their ‘Clear Audio’ technology. It also has motion interpolation capabilities with Motionflow XR and all the Smart TV features we’ve come to expect. Priced at £429, it’s quite costly for the 32-inch sector but if you want the best, or close to it, you have to be prepared to pay a premium. Let’s see if it’s worth it.

The silver bezel of the Sony W706 is fairly stand-out so if you think it’s something you may find distracting, you’re advised to go out and see one in the flesh before committing to buy. It’s certainly contemporary, although we’d prefer something a little more subtle but that’s why the W705 exists, one assumes.

As mentioned above, Sony is upping the ante in terms of speaker deployment and the result is that the bezel is relatively thick to accommodate the larger drivers. At its deepest point the KDL32W706B is about 6.5cm, which while not totally precluding a wall-mount install, does mean it won’t be the flushest if you decide to go down that route. The relatively deep chassis houses a slightly unusual configuration of inputs that are spread right across the back and sides. Included in those are 4 HDMI ports, which is great for a 32-inch TV, one of which is MHL (Mobile High-Definition Link) capable and resides on a side connection panel, making it easier to hook up your smartphone or tablet. You also get a couple of USB ports, legacy video connections, a digital audio out and both wired and wireless LAN.

So accustomed we have become to interacting with multiple remote controls, that the solitary handset accompanying the W706 had us scouring the box for another but there was none. The TV will work with Sony’s new ‘One-Flick’ smart remote but you’ll have to purchase one separately at a cost of around £50 which we think is steep and not really worth the investment when the included controller works perfectly well. It’s nothing special but buttons are located practically and the numerous shortcut keys make using the Smart TV suite easy enough.

The menu system remains not the best

It’s good that most of the important picture controls can be got at through the Options button on the remote as, otherwise, you’re forced to troll all the way across Sony’s new homepage to get to them. Why there isn’t a dedicated button to take you to the Settings Menu we really don’t know but Sony probably figures that most of the important options are taken care of during initial setup. That’s true to some degree but it doesn’t change the fact the menu system isn’t as easy to find, nor navigate around once you do, than most of the competition. To obtain the most accurate out-of-box pictures it’s necessary to select the Cinema mode from the Scene Select menu (under the Options button) and here you get all the standard controls plus some of Sony’s more esoteric options. Those include Reality Creation, Black Corrector, Motionflow options and Adv. Contrast Enhancer as well as two point White Balance Sliders and a global gamma control.

The Sony W706 is well blessed in this area for a 32-inch TV. Like the rest of the 2014 Sony Smart TVs, it majors on content discovery and features a huge number of streaming services amongst its apps. There are dedicated pages for TV, photos, music and movies and Sony is clearly trying to leverage its position as a content provider with easy access to their Music and Video Unlimited services. We could go on but since we’ve already produced a dedicated review of the entire 2014 Sony Smart TV Platform, we won’t. The un-adjusted Cinema mode exhibited an excess of green throughout the greyscale which became more noticeable as black transitioned to white. A full white signal registered a delta Error approaching 10, which is definitely much higher than you would want. Gamma was tracking close to our designated target of 2.3 and colours were generally close to where we would want them, with only a sizeable hue error in cyan of any real note. The relatively meagre two-point White Balance controls allowed us to obtain a very accurate greyscale calibration in no time at all. With delta Errors almost all under one, across the scale, we’re very much in the unnoticeable territory here. Gamma was also tracking very close to target so we have a good tonal balance, as well, and there really is very little to trouble us here. As we can see from the CIE Chart, top right, there was a general improvement in colour tracking following the white balance calibration but since there is no dedicated colour management system, it’s the best we can do. Still, there aren’t any really significant errors at full saturation levels and, as we can see from the CIE diagram below, colours also perform well at lesser saturation levels. Red is a little under-saturated at all levels but it’s not something that’s easy to detect by eye. We’ve seen great strides taken by many of the manufacturers this year, in terms of black/dark screen uniformity and, with the death of plasma TV, it’s not before time. The Sony W706 continued that trend, displaying an excellent and even distribution of light from its backlighting LED’s and this held true for brighter content too so we weren’t faced with any nasty panel banding/dirty screen effects when watching the football, for example. Long may this push by the manufacturers continue and although it’s obviously easier to manage on a 32-inch than it is a 55”, the signs are encouraging. Actual outright black level performance was impressive, too, with a series of measurements from a chequerboard pattern revealing an averaged black level of 0.043 cd/m2. That should be enough to please most and not far off the best you can expect from LED/LCD technology. We measured an ANSI contrast of just over 2,500:1 which is, again, toward the top of the technological tree and the W706 had a very satisfying sense of contrast and depth to its images.

Next to no lag for gamers
Video Processing

Sony’s X-Reality Pro processing engine is very good with excellent scaling of standard definition signals and deinterlacing of 1080i and 576i signals was also clean. The cadence detection for both PAL (2:2) and NTSC (2:3) sources was also spot-on, with the W706 able to lock on instantly and thus deliver pictures without loss of resolution or shredding. We even found that using a dash of extra ‘Reality Creation’ to compressed, streamed video worked well and the Adv. Contrast Enhancer set to Low makes intra-scene contrast performance that bit more impressive, without causing any real issues with detail crushing.

Like every other 2014 1080p Sony TV, thus far, the W706 delivered a staggeringly alert response to controller input. Using our dedicated device, we measured an input lag between 14 and 15 milliseconds, which is supremely quick, and you’d have to be looking at a dedicated gaming monitor to best that kind of figure. Even then, it would be going some!

What a super little TV the Sony 32W706 is. When all the ingredients such as great colours, excellent dynamic range and first-rate video processing meld together, it’s generally only technological weaknesses and/or poor quality assurance that can spoil it but thankfully this sample provided neither gremlin. As we noted above, screen uniformity, so often the bête noire of LCD televisions was near flawless so we could enjoy everything we watched from sports to animation and both movies and everyday TV.

If we’re going to have a criticism, you’ve probably already guessed that we’d consider 32-inches just a bit too small to get the most out of a Blu-ray, at typical viewing distances but it’s still obvious, even from 10 feet away, that the KDL-32W706B is capable of delivering crisp and gorgeous pictures. There’s so little to complain about, in fact, that’s it’s abbreviated this section of the review by at least one paragraph so we’ll just close out by reiterating what was said above - the W706 is excellent and there are bigger ones in the range!

Difficult to find any flaws with the W706!

If you don’t like a silver bezel, then the W706 isn’t the television you’ve been looking for. Thankfully, Sony knows not everyone does and provides the otherwise identical W705 in a more restrained black colour scheme. You get a superb set of connections for a 32-inch TV, with just about everything you could hope for, and there’s a set of reasonably decent speakers contained in the relatively portly back panel. At over 6cm deep, this isn’t necessarily the best choice for wall-mounting and besides, we think the minimalist base-stand is rather attractive.

The beauty doesn’t stop in the design, either, and the W706 is blessed with all the necessary capabilities to deliver superb pictures. Black levels are relatively deep and thus the W706 possesses great dynamic range, plus colours are nice and accurate and video processing near flawless. At this point we might usually stick in a caveat but this little Sony had no flaws worth noting with excellent screen uniformity ably abetting the rest of the package. It’s definitely not the cheapest 32-inch TV on the market but we think the asking price is reasonable for such a very Smart TV capable of delivering such dashing pictures. Highly Recommended!