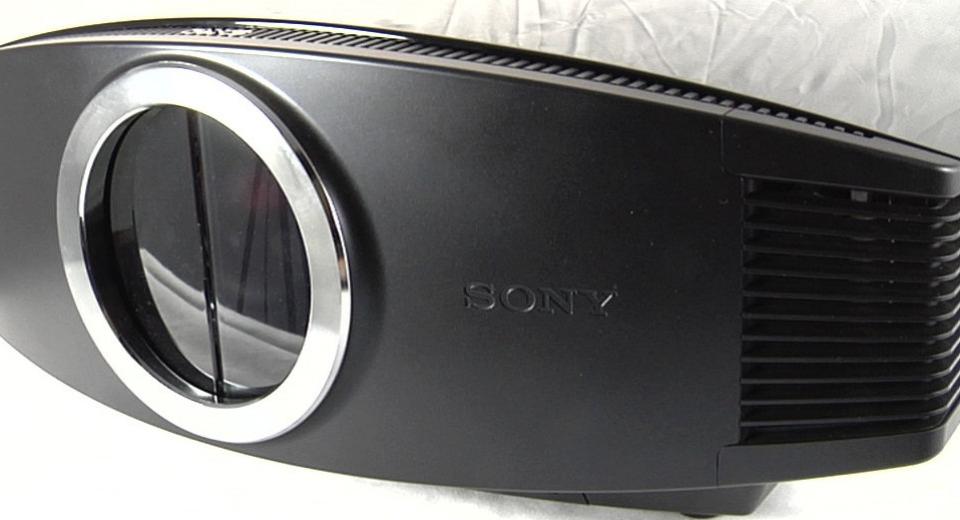 It was only a matter of a few weeks ago that I had the pleasure of spending a week with Sony’s VPL-HW10 budget SXRD projector. So when the VW80 turned up just a week later, I was wondering just what this bigger projector could actually offer in performance terms over its stunningly good younger brother.

On unpacking the unit you immediately notice a higher quality finish to the projector chassis. It now has a sleek and curvy body with a rather good looking, off blue hood. The VW80 now sports a recessed lens with electric cover to the middle of the unit, which will assist in keeping the dreaded dust out of the light path.

The lens also looks like a quality piece of glass and whilst not in the same league as the VW200 (Sony’s high end machine), it is by sight a step up on the companies other projector units. Again, like other Sony projectors, the VW80 has a multitude of connections which are housed on the left hand side of the chassis (when looking at the unit from the front). If you are looking for a small unit to hide out of the way then the VW80 (like the JVC HD350/750 and Mitsubishi HC7000) is not for you. Although not as big as the higher end digital machines, the chassis is large at 470 x 179.2 x 482.4 mm (W x H x D) but also has a reassuring weight to it at around 12kg. So after admiring the looks of the Sony, it was time to switch on and set the unit up. This is pretty straight forward as the menu system is identical to previous models and easy to use. Again, this time around, the VW80 also sports motorised lens shift and focus/zoom control straight from its stylish remote control. From a projected distance of 13 feet we were able to fill our 7.5ft 1.78:1 screen easily, with plenty of lumens to spare from the 200 watt UHP lamp. Indeed this is a bright projector which competes well with the new JVC machines. Navigating through the menu system there are a few added features over the HW10, most notably the motion flow controls. More on these later. As always we advocate correct calibration of display devices and the VW80 certainly has everything we would look for in terms of calibration controls. Again the Iris used in the projector has two auto settings or a full manual selection ranging from 0 – 100 in adjustments. As with most machines using an automated iris system I personally find these modes quiet distracting with there adjustment of image brightness. I found again that switching the iris off allowed the VW80 to give a more consistent performance with image integrity. So once we were set up it was time to do some measuring to see just how well designed the Sony is and how well it performs to industry standards.

Out of the Box and Calibration results

For me the most important point of any display review is to actually measure its performance out of the box. There is no other way to see exactly what a display is doing or how it has been designed to display its images.

So with this in mind, we first need to know how close the display can reproduce the Rec.709 HD standard and how good the greyscale mix is with the out of the box settings. For this we measure each picture mode provided to find the exact settings available, and which ones get close to D65 and Rec.709. So what did we find out about the VW80 and its basic settings?

As always we start with the spectral scan to see exactly what the 200 watt UHP lamp is giving us; as well as seeing how well designed the light path is for colour consistency. Looking between blue and yellow and then yellow and red, it appears there are filters being used in the design. This will produce a bright image but cuts some of the subtle green and red energy.

In the normal picture setting the VW80 produces a colour gamut which is wide of the Rec.709 standards with the white point close to 7200k. However quickly measuring the various presets, we find that ‘cinema mode’ with ‘low temp’ and ‘normal’ colour space selected, we get a very acceptable out of the box set up which tracks fairly well in terms of standards. The final image does look slightly under saturated, but for a starting point for those not able to calibrate the projector, it is a good starter. Greyscale is also not a million miles out when selecting the low temperature point along with the cinema preset. Although blue and red are out they do however track fairly flat across the board. This all points to a well designed preset from the Sony engineers and gives end users a good starting point to getting fairly acceptable images on screen. However, as we always do, it was time to try and calibrate the VW80.

The first thing to pick up on is the use of the CMS system Sony implement. This is a 2D system meaning you can correct the colour points (x & y) on the CIE chart; however you have no control over the luminance (Y) values. Because of this I tried to keep the colour points as close as possible to the Rec.709 standard making sure that the luminance points for each colour point were not compromised. This resulted in the use of the cinema preset as a starting point with careful manipulation of the various colour points. As you can see above the colour points are certainly improved and at the same time I was able to keep the luminance points as close as possible to correct. If I was to request anything from Sony it would be a 3D CMS system in their models for next year. Grayscale correction on the VW80 was probably the easiest calibration I have yet done with the new generation of units. This was done by selecting custom 3 (the closest white balance option to D65) and going over the high and low controls a few dozen times to make sure it was perfect. This also resulted in less work with the projectors gamma, in fact I didn’t need to make any adjustment as it fell bang on across the curve at the desired 2.2 point. So apart from a slightly lacking CMS control in terms of luminance of the colour points, the VW80 allows a fairly accurate calibration to be performed quite easily. For comparison against other reviews we have done in this room contrast measured 5112:1 calibrated. So how does it look?


Performance out of the box


I have been really impressed with Sony’s latest implementation of SXRD, most notably in its budget HW10 which we reviewed a few weeks back. Well once again when set up using the cinema mode and normal colour space presets, I was impressed with the out of the box performance. Whilst colours were slightly under saturated, most notably to my eyes in the reds, the image looked sublime in its detail and natural tones. There is a lack of image noise and panning, for the majority of the time, doesn’t end up with fine detail being lost. What I will say here is that the motion flow dark frame settings, especially film projection are hit and miss. The insertion of black frames within the processed image is a clear distraction to my eyes, and fine details also become less visible in panning shots due to the way the processor is interpolating the frames. The opening scenes of Rio in the Incredible Hulk where the camera pans over the roof tops, before stopping at Edward Norton surveying the scene, had me feeling pretty sick with the induced flicker in this mode.

The other two selections under motion enhancer didn’t necessarily improve matters either with the full setting looking too much like video material for my liking. Saying this, 24p mode on the VW80 in normal circumstances, without extra processing, does an excellent job with little added judder. Feeding the projector our HQV tests, the normal Bravia Engine 2 processing wasn't tripped up at any point, passing most of the important tests with flying colours.

As this projector is likely to compete with the JVCs on price terms, it is refreshing to see that the black performance is also very good. Without any interruptions from a dynamic iris, it does stand up pretty well against its rivals with solid blacks and good shadow detail. In a side by side (which I managed with the HD350), the Sony competes well, with the JVC just managing that little bit more depth to the darkest black levels. In terms of overall image quality, I have been extremely impressed with the VW80 out of the box and it even gives its big brother, the VW200, a run for its money in overall image depth and quality. It’s the depth I just mentioned that really stands out when switching to a fully calibrated image on the VW80. Suddenly slight details, especially in shadows, stand out and add an extra dimension to proceedings. Add in the excellent black levels and the image has a very welcoming natural tone, which can look very film like in terms of having no obvious artefacts and a solid palette. Indeed, although calibrating the colour points is difficult with the included 2D CMS system, the end results added an excellent vibrancy to natural looking colours, with excellent gradation and very realistic skin tones. Whilst the calibrated images are certainly worthy of the time spent in set up, the actual out of the box images should also not be sniffed at. I have been extremely impressed with the VW80 and would be quite happy to live with this unit. When reaching this part of any projector review this year, I have really struggled to find any negatives with any of the machines I have seen so far. Indeed, the manufacturers have gone to great lengths recently to move their projectors along from last year’s models and Sony are no exception. The VW80 is probably the company’s finest example of a home theatre projector yet. It’s out of the box performance is first rate and once calibrated it competes with the very best out there under £20k. Is it a reference machine? Well, I feel it just misses out in overall dynamic range against the latest JVC models, but it also offers a more natural colour performance than most of the other contenders in out of the box settings.

The HW10 from Sony impressed me with its performance at the budget end of the SXRD market, and the high end VW200 is a fine unit. But it’s the VW80 that has really excelled from Sony’s latest range, indeed the VW200 would struggle to compete in many areas against its smaller brother. If you are in the market for a mid range high performance projector, make sure you add the VW80 to your demo list. It’s a real star and comes highly recommended.