Sony serves up a 32-inch HDTV, and saves us some cash by leaving out the 100hz processing. 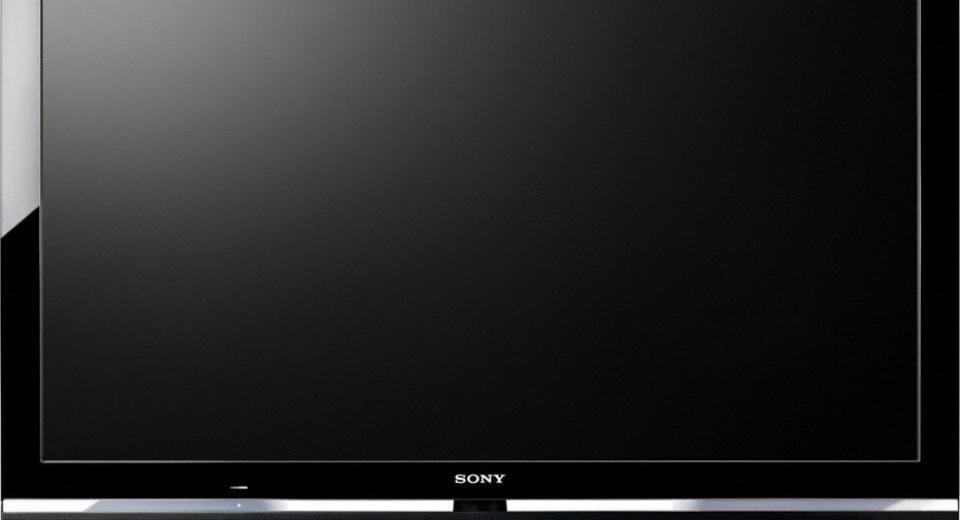 Sony's KDL-32V5500 BRAVIA HDTV has a huge amount in common with the recently-reviewed W5500. The styling is near-identical, both have 4 HDMI inputs, both have 1920x1080p panels, and they even both have Applicast internet connectivity.
It turns out that all that's missing from the V-Series model, which is £100 cheaper going by Sony's official retail prices, is the Motionflow 100hz system. This is, in fact, a feature I often recommended leaving disabled anyway. If the rest of the performance is of the same good standard, then it looks like the KDL-32V5500 is going to constitute money well banked (or money well spent on some Blu-ray Discs!) Let's take a look.

Ah, gloss black again. The KDL-32V5500's 1080p panel is framed by a thick black bezel, which comes covered in protective film to avoid scratches. It's a shame that Sony have succumbed to this trendy, glossy finish - in the past, I had the impression that their designers had more restraint than this.

Below the screen is a transparent bar which houses the power LEDs and infra-red sensor. This thin strip sits above a stippled black speaker bar. The entire assembly sits atop a tabletop stand (also gloss black).

This is another BRAVIA TV featuring Sony's Xross Media Bar (XMB) menu design, which stacks menu items vertically and menu categories horizontally. Picture controls are close at hand, and on top of traditional Backlight, Contrast, Brightness, Colour and Sharpness controls, we have Noise Reduction (3D/temporal type, quite effective), MPEG Noise Reduction (which makes almost no difference at all - not necessarily a bad thing!), and a cadence detection control for choosing the omost appropriate deinterlacing mode for Film content (“Film Mode").

The gimmick-filled Advanced Controls screen has a few useful options: a Gamma control (which we didn't have to adjust in this case), and user-accessible Greyscale (“White Balance") adjustments. The rest of the options (Black Corrector, Contrast Enhancer, Light Limiter, Clear White, and Live Colour) are best avoided, and are really just simple and fairly pointless video adjustments dressed up as advanced options.

The W-Series BRAVIAs impressed me with their out-of-the-box picture accuracy whilst using the Theatre mode (accessed by pressing the orange button on the remote control), so I looked forward to seeing if this V-Series version was the same. Certainly, it exhibited much of the same behaviour during basic setup: the Brightness setting required being raised by two clicks from its default to reveal as much shadow detail as possible, and lowering the Contrast was necessary, because the default setting was causing visible colour shifting in full-white areas. Once the basic calibration was done, I was happy with the results, and progressed by measuring the TV's performance to see if my hunches regarding its similarity with the W5500 model were correct. They were! Once again, the results showed that Sony have made a truly admirable attempt at providing D65-accurate pictures at the touch of a button. The correlated colour temperature was just a tiny bit too low, meaning that there was an almost imperceptible red tint. For a reality check, though, this result is actually better than what I've accomplished after many hours of tweaking with other displays – very impressive.

Calibrating the Greyscale using a measuring device and the TV's White Balance controls brought almost no improvement, because the result was so fantastic to start with. In the interests of remaining scientific, though, I should mention that the highest delta error dropped from 3 to around 2.5. Whatever the figures, these figures refer to errors which are almost imperceptible. Great job, Sony. The KDL-32V5500 doesn't break the Sony tradition of not offering a Colour Management System, so we're left with only the basic “Colour" control offering us any possible hope of refining colour performance. With this said, it's quite restrained to start with. You might notice that in both Pre and Post calibration charts, the colours are actually often undersaturated, the reason for this being that beyond a certain point, raising the Colour control would only raise the Luminance of the colour, but would not correct its x and y coordinates.

Gently raising and lowering the lone "Colour" control didn't make any definite improvements to this aspect of the TV's performance, and the “Live Colour" feature only exacerbated errors. Sony would do well to follow the lead of manufacturers like LG and Samsung, and provide some real colour management controls - especially since they've demonstrated what they can achieve in terms of Greyscale.

The KDL-32V2500's video processing was very good: deinterlacing of PAL (2-2) and NTSC (3-2) Film content was performed correctly AND quickly. With the Film Mode option set to Auto1, I never spotted this feature tripping up and mistaking Video content as Film (the scrolling news tickers on news channels are often a problem, but not here).

Jaggies for video-based content weren't as well suppressed as on other displays, but this is rarely an issue on real world content, which is typically too soft to really highlight any issues. Lastly, scaling was good, but not the crispest I've seen. All in all, these results were identical to that of the KDL-32W5500, which also features BRAVIA Engine 3 branding, and I assume, mostly identical components.

LCD TVs without a 100hz system typically react quicker to input commands, because they don't have to generate motion vector information and new inbetween frames before sending video to the LCD panel. (Even in 100hz TVs which let you turn this process off, a delay is still often involved, but this depends on the TV design). This was the case here: even before engaging GAME Mode, my usual test game of Halo 3 felt very quick and responsive. Turning the GAME mode on made no discernible difference to responsiveness.

Sony has built in several extra features to the KDL-32V5500. In brief, these are Picture Frame mode, which displays JPEG images on the TV, the ability to play MP3 and certain movie files on the TV via a connected USB device, and Applicast, which allows you to connect to the internet and download semi-useful applications such as news readers, a clock, and a calculator, for display beside the TV picture. I don't consider these really useful, but I imagine some will appreciate the ability to view video files from a USB device directly.

One thing that became obvious at first glance, and even moreso during the calibration process, was that the KDL-32V5500 doesn't feature quite as high quality an LCD panel as the KDL-32W5500. The panel in this unit had a slightly less impressive black level, lessened uniformity (with hints of uneven lightness visible on solid colours, especially at the left and right edges of the panel), and interestingly, an unusual scanline-like pattern from extreme angles on whites (this is not noticeable during normal use, but I found it interesting enough to mention).

Don't let any of this put you off too much, though – the quality of the panel here is still superior to that of those fitted to just about every other 32" LCD TV I've reviewed. Most notably, even when blacks lost their depth, they still at least looked grey – I've seen many LCDs which have a noticeably purple look in low light.

Perversely, despite these slight down-sides, the KDL-32V5500 does not feature the objectionable "dragging blacks" issue that irritated me on the W5500 version. Like on any LCD TV, blacks do leave some trails, but they're nowhere near as severe. For those unfamiliar with "dragging blacks", LCD TVs have difficulties when the pixels have to change colour from one extreme to the other (from full black to full white). In situations where this is possible – like cartoons which feature thick black outlines – the blacks can produce visible trails, which can be quite distracting. To reiterate, the issue does exist here to a mild extent, but this is to be expected.