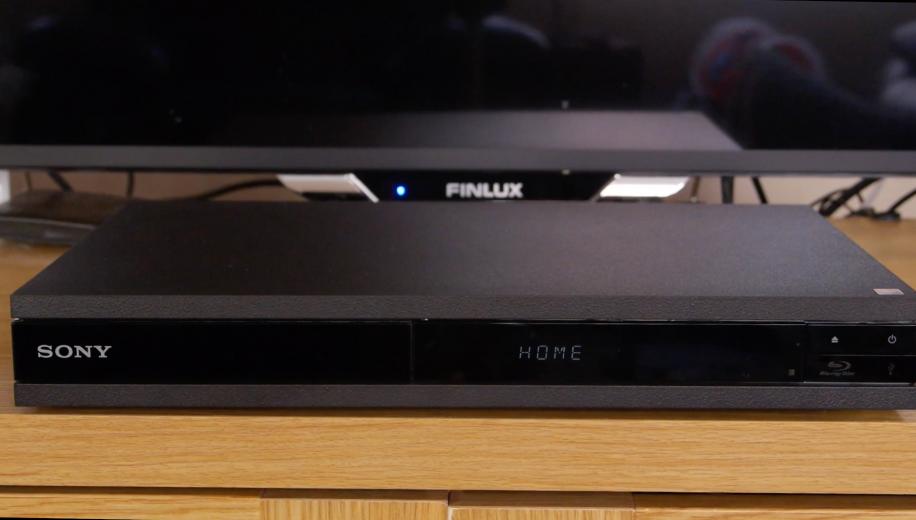 The term Blu-ray player doesn’t really cover the complete functionality of the Sony UHP-H1. This box of tricks is part disc-spinner with 2D/3D Blu-ray and DVD discs accepted, part media streamer and part Hi-res audio player with support for files up to 24-bit at 192kHz sample rate. It is also equipped with Sony’s best video processing chips so it can scale content up to 4K at 60 frames per second, blessed with a suite of streaming apps and you can even play videogames on the device courtesy of integration with Sony’s PlayStation NOW service. At a cost of £400, this is clearly not a budget option and given its inability to play Ultra HD Blu-rays, it faces stiff competition from Samsung’s UBD-K8500 which can, so it’s going to need to perform to a very high standard to justify the pricing – let’s see if it does.

Compared to the usual lightweight disc players we’ve covered recently, it’s obvious that the build quality of the UHP-H1 is a cut above. It’s still a mostly all plastic construction but there’s an underlying solidity and a lovely design to the casing which at least hints at it being high-end. There’s a band of piano black material, wedged in between two slabs of charcoal grey, which plays home to a clear and easy to read display panel, power and eject buttons and the tray loading disc mechanism. The disc tray is really nothing special, in terms of build quality, and comparable to one you would find in a £50 player. That said, the UHP-H1 is exceptionally quiet when playing a disc, so much so that you could be sat right next to it and you would barely hear it so Sony’s anti-vibration measures have clearly paid dividends. Save for a USB media play-back connection hidden under a pull-out flap at the front, the rest of the connections are at the rear. These include a fast Ethernet port, two HDMI outputs, in case your AV Receiver/connected device doesn’t support Ultra HD and/or 3D signals. You also get coax and Toslink digital audio outputs, plus stereo line-outs. It is to be noted that the HDMI 1 port is the primary connection and is version 2.0, while HDMI 2 can only take the audio signal. The supplied remote is a decent little handset with the playback controls toward the bottom, navigation options at the centre and an assortment of source selection and shortcut keys to the top – including one to directly launch Netflix without going to the Home screen. The home screen of the UHP-H1 is tile based with an apps based interface to cover just about everything. There are a number of services pre-installed, including Netflix, Amazon, Demand 5, YouTube and iPlayer, although at the time of writing, the latter wasn’t working with the player marked as incompatible. Presumably a recent software update to the Sony has caused a spanner in the works and we’ve reported the issue so hopefully it will be fixed soon enough. One feature of the Sony Blu-ray players we really like is their ability to dynamically adjust the output signal based on the framerate of the content so, for example, a 24/23.976 frames per second (fps) show or movie will be sent at 24Hz and a one at 30 fps at 60Hz, meaning playback will be as smooth as possible. Although you do need to make sure you enable this feature in the Settings Menu as it’s off by default, however.

Since the video processing capabilities of the UHP-H1, and specifically the Ultra HD scaling, are some of the key selling points, we started by testing this out first in comparison to Samsung’s ‘real’ Ultra HD Player, the UBD-K8500. Differences are marginal between the two and would be best described as different rather than better, one way or the other, with both doing an excellent job although perhaps the Sony was a little less sharp but also less processed looking. We are talking about an examination at very close quarters, however, and you would be unlikely to see any difference at normal viewing distances. Compared to a 4K Ultra HD TV, the performance from 1080p sources was again very similar from the player but at lesser resolutions, the UHP-H1 is that bit more accomplished, particularly with DVD content where a well mastered title, especially one that’s animated, could look really good.

Regardless of the cost, we expect nothing less than faultless playback when it comes to Blu-ray disc so it would be something of a headline grabber, were this high-end player to produce anything but pristine images; and that’s precisely what it did with both 2D and 3D titles, although you need to make sure you’ve entered the correct screen size to match your TV to make 3D have the right depth. With that done, performance was perfect with no unnecessary processing, colour issues or noise reduction going on.

It’s here that the opportunity for a player's processing abilities has a better chance of showing its mettle, although we can’t really remember the last time we actively chose to watch a DVD – it’s two generations out of date now, after all. Still, if you have any old discs laying around that you’ve either not replaced with the Blu-ray or UHD Blu-ray, then you can rest assured the UHP-H1 will deliver just about as well as you could possibly expect. In fact, performance is comparable to Sony’s highest-end TVs in this department thanks to superb scaling and deinterlacing.

It’s a real pity – some would say a missed opportunity – that the UHP-H1 doesn’t possess HEVC decoding capabilities as it would then be compatible with the likes of Amazon and Netflix’s Ultra HD streaming services. As it is, you are limited to a maximum of 1080p but it performs impressively with these sources. As we mentioned earlier, the UHP-H1 can detect and play 24/23.976p content correctly from all sources – including video streaming ones – and it really helps maintain the filmic quality of the material. Unfortunately, it’s not able to do this with 25 or 50 frames per second material so this isn't as optimally displayed.

Unlike most of the Sony range of players, the UHP-H1 is capable of decoding both 5.1/7.1 Dolby TrueHD and DTS-HD MA to multichannel PCM so if you have a receiver that doesn’t support the HD audio formats, that’s good news. Naturally bit-streaming either, and more besides, also isn’t any issue and, subjectively, it performed identically to our two other, resident Blu-ray players. We also manged to get our hands on a couple of SACDs, which the UHP-H1 replayed perfectly via multichannel and stereo and it also did a great job with regular CDs, too, so it makes for a mighty fine digital transport.

The UHP-H1 also integrates with Sony’s multi-room audio range of speakers over your home network, allowing you to stream CDs, networked files and music services around the home. Additionally, the inclusion of Bluetooth LDAC allows the player to directly connect to Bluetooth headphones and speakers which is a very useful feature in terms of cutting down on wires and/or listening late at night from a distance the typical headphone cable wouldn’t stretch to. The UHP-H1 also boasts Hi-res audio playback of FLAC, ALAC, DSD (DSDIFF/DSF) and AIFF at up to 24-bit/192kHz over USB and lesser sampling rates from other sources.

You would have to be specifically looking at the very niche area of Hi-Res audio playback to even consider the Sony UHP-H1 as a purchase. It does feature very good build quality, excellent replay of DVD and both 2D and 3D Blu-ray disc and a range of important streaming services, to boot, but then you can get all that from a player priced considerably less. The same can be said for the ability to decode HD audio formats, including DTS-HD MA and Dolby TrueHD but at least, unlike the lesser-priced Sony range, it can do it. The big stumbling block with the UHP-H1 is its inability to play Ultra HD Blu-ray or play UHD content from the streaming services when, for very similar money, there are players on the market that will provide that degree of future-proofing. We can recommend the Sony UHP-H1 on the basis that it doesn’t really put a foot wrong, in terms of the advertised features, but if you don’t need the Hi-Res audio or SACD playback, your money is better spent elsewhere.

The obvious candidate in this price bracket is the Samsung UBD-K8500 which is at least as good a disc spinner but adds in Ultra HD Blu-ray and HDR capability as well as the 4K streaming services. It’s not quite so capable in the audio department, however, but still features multiroom integration and decent CD and Bluetooth playback. For something that ticks all the same boxes as the Samsung and matches the audio performance of the Sony, we would have to point you in the direction of the Panasonic DMP-UB900 although there’s a £200 premium on top of the cost of the UHP-H1 for that one.