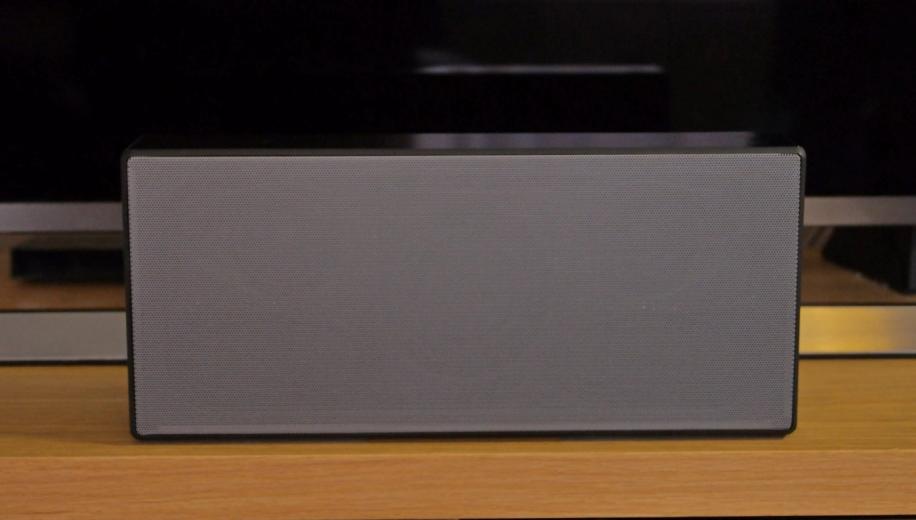 The Sony SRS-X77 is the junior member of Sony’s multi-room wireless speaker range with an asking price (February 2016) somewhere in the £200 region. That’s considerably less expensive – 400 pounds so - than the flagship SRS-X99 we recently covered and roughly £80 less than the step-up SRS-X88. In what is now a fairly crowded space, the Sony SRS-X77 has it on to carve itself a niche, so let’s see if it’s up to the job.

The SRS-X77 sports a non-removable, metallic front-grille in a simple rectangular box with a footprint of 359 x 111 x 103mm (WxHxD), so it doesn’t take up a lot of space. The build quality is very good and the unit is heavier than it looks – if that’s possible- and it’s certainly weightier than other products in the same price bracket. There’s a touch-sensitive control panel on the top which, unfortunately, doesn’t illuminate when used so the buttons that are there – volume, power & input selections – can be difficult to read as a consequence. All of the physical connections of the SRS-X77 are around the back and consist of a LAN port, a semi-concealed Wi-Fi antenna, a 3.5mm stereo jack and a USB port; the USB input is only used for charging equipment, by the way, you can’t use it to replay music from connected devices. Along with the inputs there is also a WPS (Wi-Fi Protected Setup) button which can be used to create the network connection, if your router supports the function. If you’ve bought a new router in the last four years, or so, it should and it’s a much quicker and easier way than manually setting it up; just make sure you have the Network switch – also at the rear – set to on. It’s also worth mentioning that, unlike the SRS-X99, the X77 charges from the mains so it’s portable and the battery was good for around 6-8 hours use, at medium volume.

If you want to do anything other than simple playback via Bluetooth or the stereo input, downloading the SongPal app – iOS & Android – is a prerequisite with the SRS-X77 as it unlocks the built-in network functionality. Setting it up is a pretty straightforward and there’s a reasonable amount of hand-holding in SongPal. If your phone or tablet is capable of NFC (Near Field Commination) pairing, the app will instruct you to place it on the corresponding tag on the top panel, else you will be guided to your Bluetooth settings menu where you pair in the standard fashion. From there on in, you’re in the hands of SongPal...

The interface of SongPal is user friendly and easy to find your way around. From the home screen, you are able to directly navigate to various online streaming services and you can nominate which, in particular, you want in the initial setup; it’s also easy to add more later on if you need to do so. Using SongPal is simply a case of making sure your phone or tablet is connected to the SRS-X77 and then choosing your music source from the main screen. There are some volume and EQ settings available from a context menu top right and all the other settings are accessed from a finger-over menu on the left. You can also use it to chain together other wireless speakers in the Sony range (SRS-X99 & X88) where you can play the same audio through at the same time. Comparing to some other systems available, this is actually somewhat limited as you can neither group as a stereo pair nor play different music to different speakers. Another nuisance was the inability to use any of your nominated apps for multi-room, only those that Sony allow – Spotify, TuneIn, Google Play Music, Deezer; we’re not sure if it’s a bug in the app or by design but it is annoying. You can play any files stored locally or from the network but the lack of versatility with streaming services does need addressing.

This little box really packs a punch and, as we’ve become accustomed to with these products, fills a much wider soundstage than conventional logic would have you believe. Most of our listening was done via Bluetooth and over the network but the SRS-X77 also sounds great if you do something as old fashioned as attaching a wire between it and your audio source.

We were especially impressed by the DSEE (Digital Sound Enhancement Engine) feature of the X77, which effectively upscales compressed audio to something that sounds better and you can quite easily hear how effective it is with content at 320kbps, which accounts for the majority of streaming services. Of course, feed it with something less ‘lossy,’ such as the HIFi quality TIDAL stream, and it does sound better but this is a system well designed to cope with the inadequacies of what many people are listening to in 2016.

There’s also a good, if not seismic, amount of bass extension on-board the SRS-X7t with, again, a slightly disarming amount of impact but we did find there were some details lost because of vibration within the housing. That also had the knock-on effect of obscuring the mids and highs but it can be mostly mitigated with careful placement – i.e. put it on something soft(ish) and absorbent – which produces a much rounder, better-balanced sound.

Should I buy the Sony SRS-X77?

The Sony SRS-X77 is a very worthy consideration for its combination of stylish looks, great connectivity and impressive integration with streaming and networking apps alone. Of course, if it doesn’t sound any good, all that counts for naught but this (relatively) little device also boasts great audio quality with a sound that radiates well beyond the confines of the compact cabinet and packs in lots of detail, to boot. There are some niggles with the integration of non-Sony nominated streaming apps in to the multi-room set-up and it can sound somewhat harsh and abrasive when placed on a hard surface but the Sony SRS-X77 is well deserving of its AVForums Recommended Award.

You could also consider the Samsung R3 which puts an interesting design slant on the wireless speaker form, whilst retaining the multiroom and Bluetooth capabilities or the LG H4 Music Flow speaker which also supports Hi-res audio and features more flexible multi-speaker configurations; both are priced similarly to the SRS-X77 at around the £200 mark.