Everything but the kitchen sink and under £100? What are we missing? 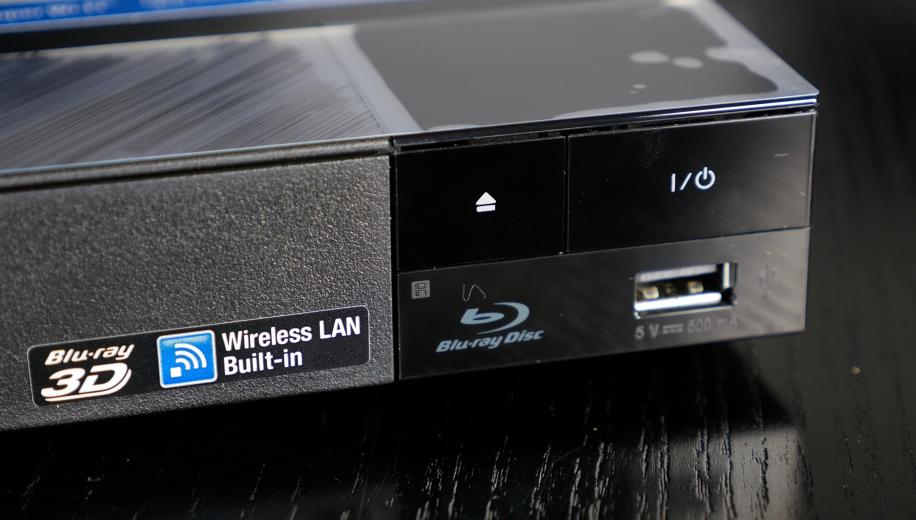 The BDP-S5500 is the second highest Blu-ray player in Sony’s budget line-up of disc spinners and offers HD upscaling, 3D playback and built-in WiFi over the lower models such as the BDP-S4500 reviewed a few weeks back, and the lower placed BDP-3500 and BDP-1500. Only the BDP-6500 sits above our review sample and that adds in 4K upscaling and a £50 price rise.

Sony are looking to hit a low price point to attract regular consumers as well as adding the latest features such as apps and streaming via WiFi. If the streaming capabilities are high and Sony is not tampering with the Blu-ray picture quality from the disc, they could be on to a budget winner with the BDP-S5500, let’s find out. Plastic, light and a little bit flimsy. That is probably the most accurate description of the build quality and design. There is no front panel display to tell you what is going on and the available controls on the front of the unit are almost non-existent. The physical size of the Sony BDP-S5500 is a little more than that of a DVD or Blu-ray disc at 9.1 inches wide and just 1.5 inches tall. The disc tray is hidden under a plastic flap with an eject button, power button and a USB slot to the right side of front panel. However taking into account the price point that Sony is aiming at with this series of budget players, we are not surprised corners and some features have been cut somewhat. Sony have tried hard to make the design appealing with some fake brushed metal effect plastic to the top panel and to be honest, it is not the worst design we have ever encountered. In fact the small size and compact nature of the chassis means to can be hidden away and there are no annoying lights showing in a pitch black room. Around the back we are again met with the bare minimum requirements for the S5500 to do its thing. From left to right we have the 12V power input, a LAN port, one HDMI out and a Coax digital audio output and that is it. To continue the budget approach the supplied remote control is again made to fit within the price point and is an all-plastic affair. However the lack of weight doesn’t affect the unit sitting neatly within the hand with all the important button selections within a thumbs reach. There is also a very prominent NETFLIX direct key to launch the app and the rest of the control buttons are of a reasonable size to find easily, even in a dark room. The user interface and menu pages are intuitive to use and well laid out with simple graphics and tiles and this allows easy navigation of the features you want to access. Like everything else associated with the Sony BDP-S5500 everything is sensibly laid out, easy to use and aimed at the everyday consumer. There are a few technical menus available for initial set up of the player and while on our sample there was no back door processing or image adjustments switched on for Blu-ray playback, it is worth double checking settings are at their best options, especially the 3D area if you intend on watching 3D discs.

With WiFi built-in the S5500 already has a foot up on the S4500 Mark reviewed in June and makes the humble budget Blu-ray player an instant super charged Media box capable of streaming all the major providers and playback HD Blu-ray discs!

The Featured Apps and My Apps screen layout is easy to follow and understand. It provides direct access to the major features of the S5500 including screen mirroring for those with Miracast capabilities, along with access to any NAS drives on your network for media playback as well as the USB slot and of course the Blu-ray playback option. In this section of the screen you can also pin your favourite apps to the board from the Featured Apps and All Apps selections. Here you will find the major video services from Netflix, Amazon Prime Video, BBC iPlayer and Demand 5. There is sadly no All 4 or ITV Player available at the time of review (August 2015). Other notable apps include Sky News, BBC News and YouTube.

In terms of control apps you could use the Sony SideView application as a remote for the player which can launch apps and control the major playback features (although the TV guides are of no use).

Given that most media boxes offering the same kind of streaming capabilities with similar apps cost around the same as the Sony BDP-S5500 you could say you get the Blu-ray player for free.


As you would expect from a manufacturer like Sony there is no back door processing, noise reduction of image ‘enhancement’ features when the S5500 plays back Blu-ray at the default settings. What you get is what is on the disc as it should be and as such the images are excellent with superb 24p payback and even very good de-interlacing with 1080i music Blu-rays. We couldn’t fault the Sony’s Blu-ray playback.


With most Blu-ray players the major differences between models can be found when handling DVD upscaling and the S5500 passed with flying colours. Sony has been a long term developer of upscaling technologies with large databases of algorithms and techniques for getting the best out of the technologies. Scaling DVD to HD resolution proved easy enough for this player with no major issues like edge ringing or other artefacts. Fed a good quality DVD and the image on offer stands up well even on a 10ft projection screen.


Given that some of the issues with streaming image quality will be related to how fast your internet connection is, we found that on a 19mb line we were up to decent HD quality streaming quality within 30 seconds of starting a TV show or Film and suffered no buffering or image drop out at any time using any of the services available on the S5500. We would be happy using it to stream on a regular basis in place of our resident Roku 3, so worth bearing in mind if you want a one stop do-it-all box.


We found on average that the Sony BDP-S5500 would load up a Blu-ray within 30 seconds, which by today’s standards in about the norm. It is however a noisy player when making viewing selections and skipping chapters, but during playback there wasn’t an obvious issue with any hum or whine.


The Sony BDP-S5500 Blu-ray player is built to a price point and you can see that in the size of the unit with no display on the front and a lack of on-player controls. It is also built of plastic and is light weight so lacks a feeling of solidity. However with all that said what the S5500 offers is excellent Blu-ray playback of 3D and 2D discs, great upscaling of DVD titles and a complete selection of the best streaming apps for TV and Film content. Added to this is not only a wired LAN but you also get WiFi built-in and suddenly you have a very compelling all-in-one media box. Yes the build quality is a little cheap feeling, but the image quality and functionality soon win you over and it gets a recommended from us!


There are a whole host of decent Blu-ray Players at this price point and all offer something slightly different in terms of WiFi and the apps supported, but most will do the major players like iPlayer, Netflix and/or Amazon. Have a look at our full line-up of reviews to see what else might grab your attention.