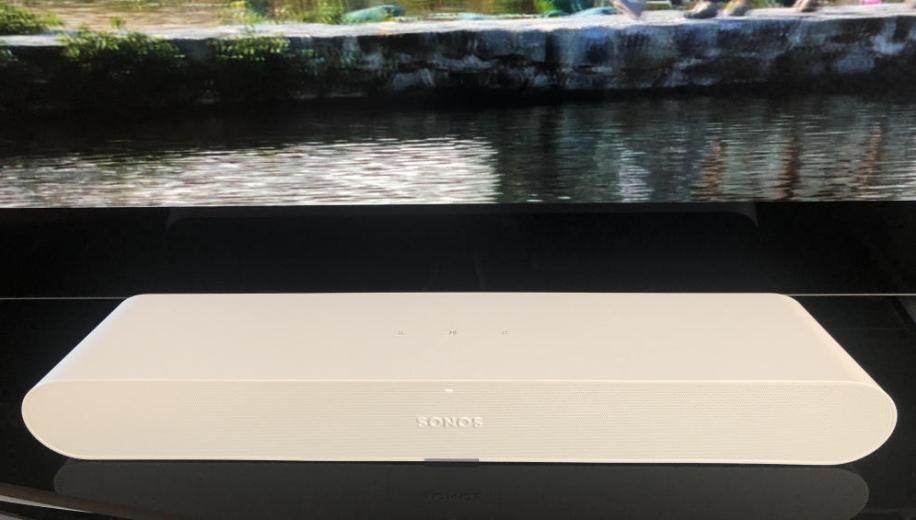 Taken in isolation, there’s lots to enjoy - admire, even - about the way the Sonos Ray performs. Its stripped-back specification means it’s uncomplicated to set up, the unadventurous stereo configuration means it’s relaxed about positioning, and its membership of the planet’s leading multi-room ecosystem doesn’t do any harm either. Its sound, meanwhile, is coherent and enjoyable - and a mile ahead of the sound of an unassisted television. But nothing occurs in isolation, does it? And when you start comparing and contrasting the Ray with some of its leading rivals, it starts to sound a little small-scale and to look quite expensive. If the wider Sonos system is a big part of your purchasing decision, go right ahead. But if you’re trying to source a compact soundbar at reasonable money with worthwhile performance, you can do better for less.

The not so good

What Is the Sonos Ray?

The Sonos Ray is the newest and most affordable soundbar in the Sonos range. It’s a soundbar of the old school, inasmuch as it’s a stereo device designed, first and foremost, to represent an upgrade on the sound your TV makes on its own.

At £279, it’s the most affordable Sonos soundbar, and by a margin. But that (relatively) modest asking price is reflected in the Ray’s configuration: its two tweeters, two mid/bass drivers and two reflex ports, arranged in a dead-ahead layout, deliver stereo sound using four blocks of Class D amplification.

As well as stereo PCM, the Ray is compatible with Dolby Digital 5.1 and DTS Surround Sound audio content - but it downscales these multi-channel standards to stereo before it delivers them, of course.

Sonos has long since established itself as the best (by which we probably mean the simplest and one of the most stable) multi-room audio system around - and Ray is a part of that, which counts for a lot. But there’s no denying that some acknowledged soundbar specialists (we’re thinking of Yamaha in particular) will sell you an alternative that’s better specified and more affordable.

In other words, it’s going to take more than a desirable brand logo to carry the Sonos Ray over the line in first place.

The Sonos Ray is available in matte black or matte white. No matter the finish you go for, you’ll be buying a well-made, nicely finished and even mildly tactile little soundbar with non-parallel sides and pleasantly curved ends.

The lack of HDMI seems quite wilful, though - this is 2022, after all.

At 71 x 559 x 95mm (hwd) it’s usefully compact and will suit those who own a smaller TV - it’s even suitable for titchy 40-inch screens. The forward-facing driver layout means it’s relaxed about being on a shelf with a surface directly above it, and Sonos will sell you a bespoke wall-bracket if you so desire. Bear in mind its 71mm height makes it taller than a lot of price-comparable rivals - so if it’s going on the same shelf as your TV, make sure it doesn’t foul the bottom of the screen.

Connectivity is almost as brief as the soundbar itself. Physical inputs (in a little recess on the rear of the cabinet) consist of Ethernet, digital optical and mains power, while wireless connectivity runs to Wi-Fi and Apple AirPlay 2. The lack of HDMI seems quite wilful, though - this is 2022, after all.

On the top of the Ray there are capacitive touch-controls covering ‘volume up/down’ and ‘play/pause’. If it’s part of a wider Sonos system involving a smart speaker, voice control is available (and, of course, Sonos has its own bespoke voice assistant in the pipeline). But your best bet where control is concerned is the Sonos app. It remains the best example of its type around, covers all bases in the most straightforward and logical fashion - from integrating streaming services, through adjusting EQs, to selecting features like ‘speech enhancement’ or ‘night mode’, it’s a wide-ranging, stable and admirable interface.

There’s a little row of tell-tale LEDs in the top/centre of the front of the soundbar - they let you know what’s what as far as what the Ray is doing. Of course, the app lets you defeat them if you prefer a cleaner look.

This is a 2.0 soundbar - which, in simpler times, used to be called ‘stereo’. The driver array consists of two tweeters, two mid/bass drivers (or, according to Sonos, two ‘high-efficiency midwoofers’) and a couple of bass reflex ports, all facing forwards from behind the grille in the classic ‘firing squad’ style. Four independent blocks of Class D amplification provide the oomph.

Of course, this is Sonos we’re dealing with - and the company has long regarded divulging any meaningful details of specification as both unnecessary and inappropriate. So we have no idea how much power the Ray turns out, how big its drivers are or what they’re made of. Quite why the company considers this information too sensitive to disclose is an ongoing mystery.

‘Lack of complexity’ often equates to ‘simplicity of set-up’ - and that’s how it proves here.

This soundbar is poised, characterful and convincing with dialogue

Decide where you want to position the soundbar. Plug it into the mains. Open the control app (as already noted, no better control app currently exists) and follow the very brief instructions. Getting from ‘opening the box’ to ‘listening to the Ray’ is the work of mere moments. Given a few moments more, Ray can be integrated into your wider Sonos system.

iPhone owners can also take advantage of Sonos’ ‘Trueplayer’ room calibration feature. You’ll need to pace about the place waving your smartphone, it’s true - but it doesn’t take long and does seem to set the Ray up to its optimum performance relative to your listening space.

As long as you’re realistic in your expectations - this is a small, relatively affordable, stereo soundbar, after all - there’s quite a lot to enjoy in the way the Ray goes about its business. Certainly, it wipes the floor with the sound of any flatscreen TV that doesn’t have its own integrated (and invariably expensive) audio system.

Tonally, the Sonos is quite nicely balanced. The frequency range hangs together well, with the handover between the mid/bass drivers and the tweeter happening imperceptibly. At the bottom end, where so many movies keep their special moves, there’s decently controlled punch and extension - the Ray delves respectably deep, freighting bottom-end information with plenty of detail about tone and texture, and generating a far more convincing sense of impact than your TV has a hope of doing by itself.

The upper end of the frequency range is, by contrast, a little less assertive and a little more circumspect. The fact that treble sounds never get out of hand, even at significant volume, is good - but the accompanying fact that it sounds slightly rolled off, and short of real bite and attack, is less so.

The midrange is the most successful aspect of the Ray’s performance - handy, when you consider just how much of a movie soundtrack operates in this area. This soundbar is poised, characterful and convincing with dialogue, brimming with detail and projects well even without ‘speech enhancement’ being deployed.

There’s reasonable dynamic potency on display when the soundtrack switches from ‘hissed exposition’ to ‘building-levelling explosion’, and sufficient dexterity and detail-retrieval to make minor dynamic variations apparent too. Set your median volume level too high, though, and when the going gets properly rowdy those low frequencies overplay their hand somewhat. A listen to the soundtrack for Derek Cianfrance’s The Place Beyond the Pines illustrates the point perfectly: listening at realistic volumes allows the dynamic ebb and flow of the movie to express itself well. Turn it up in the name of ‘excitement’, though, and some of the Ray’s discipline deserts it and the audio becomes bottom-heavy.

The Sonos Ray isn’t an especially big listen - the sound it generates is localised and relatively small-scale. Its soundstage is organised well, though, so despite the fact there’s not all that much distance between ‘extreme left’ and ‘extreme right’ the soundbar does at least make what distance there is obvious. There’s not much overlap or scrapping for primacy in terms of the way the stage is laid out - unless, again, you’re listening at optimistic volume. In these circumstances, it seems bass will always seek to dominate.

... it loses a degree of composure when asked to play at higher volumes

In broad terms, the Ray deals with music in much the same way. Tonal balance is good, the soundstage is coherent, and each area of the frequency range stays in its lane - unless you crank it up a bit. In these circumstances, detail levels fall away, low frequencies muscle their way to the front of the stage, treble sounds become inhibited.

If you’re already a Sonos believer and are after a small-ish, reasonably affordable soundbar to accompany a small-ish TV and integrate into your wider system, well, here it is. It seems unlikely anyone already convinced by Sonos is going to find the Ray’s shortcomings any kind of deal-breaker.

The rest of us, though, should have a slightly longer think about it. Yes, it’s simplicity itself to set up and operate. Yes, it looks the part and yes, it’s very handily sized. It can go on a middle shelf just as easily as it can be attached to the wall. But it’s not the biggest-sounding speaker this sort of money can buy, it loses a degree of composure when asked to play at higher volumes, and it goes without an HDMI socket for no reason we can fathom.

The most obvious alternative to the Sonos Ray is the Yamaha SR-C20A. It’s usefully cheaper than the Sonos - £50 is never to be sneezed at - and while it’s not as accomplished where its interface or its perceived value is concerned, it has it where it counts. It’s a larger-scale listen than the Sonos, has greater poise at volume and produces an altogether more assertive sound.