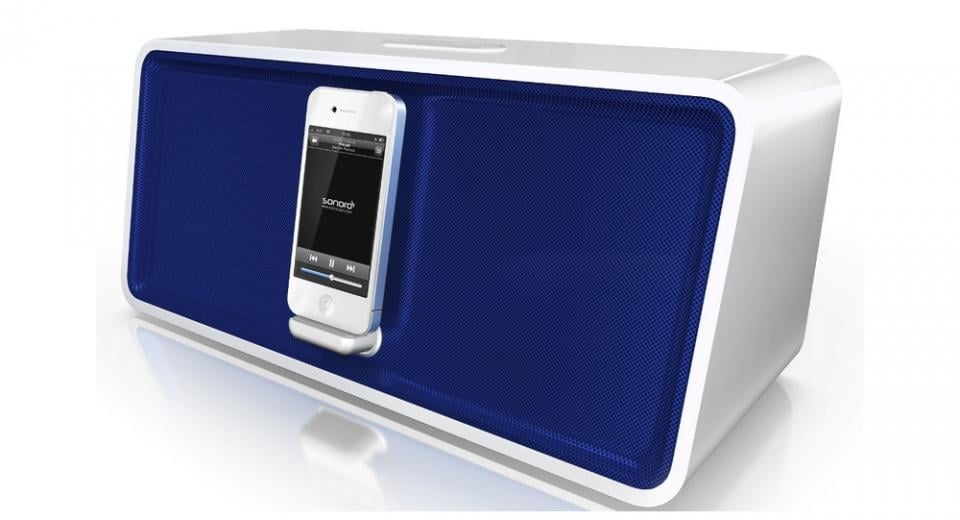 Sonoro is a German brand and their range of compact systems is now being distributed in the UK by Computers Unlimited. Many of the models are part of the “Cubo” family and this includes a more conventional all-in-one system and a portable radio. The CuboDock is the largest of the company’s iDevice compatible designs.

The CuboDock is also one of the largest models here. The 38cm overall width and large frontal area make it appear pretty substantial as well. While not a cube “Cubo” is a fairly accurate description of the design philosophy as save for a couple of curved edges, this is a symphony of straight lines. The review sample was supplied in a white finish that doesn’t really help it look anything other than very large indeed. Other finishes and colours are available though and these look more visually appealing. Standby and power controls are fitted on the top panel and are easy to find in a rush. Pressing and holding the standby button will also change inputs which is a neat feature. Like the PURE, the Sonoro has an LED that will go different colours depending on input and status.

There are some useful design features as well. The first is that like the Monitor Audio and PURE, the dock is mounted on the front of the unit. The Sonoro however has a very small mount that means your iDevice is resting on the front panel and therefore less likely to be knocked or damaged. The second is that the CuboDock supports Bluetooth in addition to the dock and auxiliary input. The quality of Bluetooth is fractionally inferior to AirPlay and more of a faff to get connected but it does mean that the Sonoro has more to offer households that are not entirely Apple based.

Sonoro is a little cagey about the exact nature of the amplification and drivers that they use in the CuboDock but the specifications show that the CuboDock makes use of separate neodymium mid bass drivers and soft dome tweeters. Given the space on the front panel for drivers is pretty considerable, it is fair to assume that these will be some of the larger drivers in the test. Amplifier power is also not disclosed but the CuboDock has no trouble achieving some of the higher volume levels of all the models here. These drivers are augmented by a single large bass port on the rear of the chassis.

The CuboDock also makes use of a DSP chipset to act as a flexible EQ system that alters frequency response depending on the listening volume. This is not as sophisticated as the Monitor Audio system as there is no start-up EQ process but it should help the CuboDock achieve a reasonable sonic balance across different volume levels and music types.

The fit and finish of the unit is of a very high standard and the CuboDock feels extremely substantial - helped in part by the impressive 3kg weight. The Sonoro feels like it could stand up to considerable abuse and keep running. The remote also feels very substantial for a small device and has a pleasant grippy underside that makes it easier to hold. Like the Monitor Audio remote, it is almost completely symmetrical which means it is fairly easy to pick it up the wrong way around. The CuboDock is one of the harder docks to put in a confined space. Not only is there an external power supply to accommodate, the rear bass port will interact with a wall if placed too close.

There is a saying - originally applied to American engines but equally applicable here - that there is no substitute for cubic capacity. The Sonoro has a large enclosure that in turns allows for large drivers and for good measure these attributes are backed up by a large bass port. The result is that the Sonoro is capable of a performance that is equally sizeable.

The first impression of the CuboDock and one that is especially valid if you have been listening to some of the other designs here first is that there is considerably more bass than is usually the case for an iPod dock. The low end extension is considerable and at times moves into being felt rather than heard. This gives the sonics of the CuboDock authority that some of the other designs here cannot replicate. There is also good detail to this low end and provided that the Sonoro is not placed right up against a wall. If you do shove it into a confined space, it becomes boomy pretty quickly. There is a also a small but very specific resonant point which can cause the dock to boom even when in free space.

This low end is backed up by a strong performance in the upper registers as well. Separate tweeters give the Sonoro detail and sparkle to its treble that makes for a very entertaining performance. As a result of this strong showing at the top and bottom end, the midrange of the CuboDock can seem a little recessed but this is more that the frequency extremes are more pronounced than they are on the other docks. This being said, the Sonoro is not as good as some of the other designs here in terms of detail retrieval. Little nuances that the Monitor Audio and PURE pick out of the mix are harder to discern with the CuboDock.

On a more positive note, the Sonoro has a liveliness and sense of drive that gives up-beat material a vitality that is very likeable. With the volume turned up and something up-tempo playing, this is rarely anything other than great fun to listen to which is surely most of the point of listening to music in the first place. Another area where the Sonoro is extremely strong is in terms of the sense of stereo it creates-maybe those few extra centimetres make all the difference here as well.

Finally, the Bluetooth performance across a number of different devices was perfectly satisfactory although in the case of the iPhone, docking the device still definitely had the edge for sound quality.

The Sonoro is big in all senses of the word. It is a larger box than some of the designs here to accommodate and is more positioning dependent than many of the other docks. It can repay this effort with a wonderfully deep and full sound that is impressive for something that is still an all-in-one system. The Bluetooth functionality is also a welcome touch and gives the Sonoro some useful extra functionality. If you can accommodate it, this is an excellent performer but it is not a good idea to force it into confined areas.