A shadow of his former self? 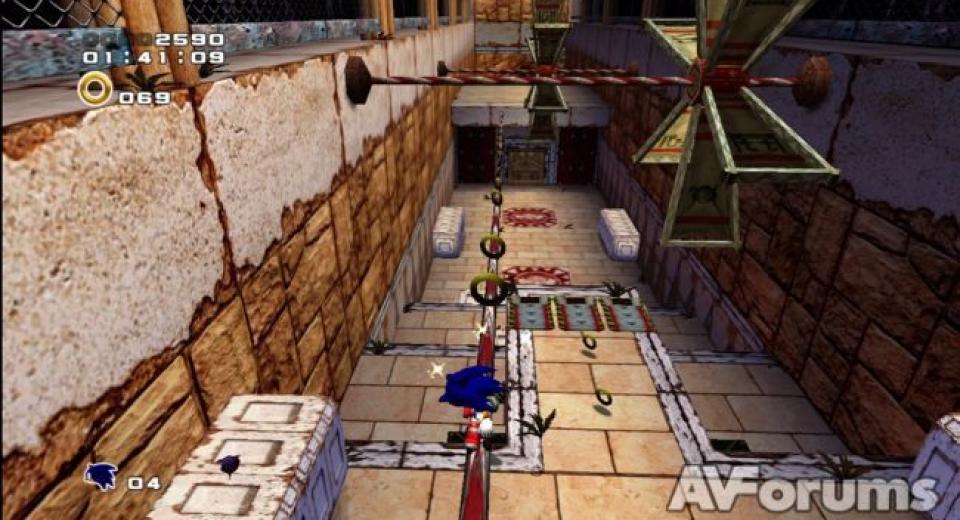 A lot of water has passed under the bridge since the last time a Sonic title appeared on a Sega console, but this game - Sonic Adventure 2 - continues to split opinion.  If you’d grown up with the 2D games, this creation of the newly formed Sonic Team USA represented a wretched Americanisation and - with hindsight - the start of a change in direction that would reach its tweenage-appealing nadir with an offshoot character getting his own gun-wielding outing.  If you were in your early teens, and perhaps thus hadn’t sampled the early 2D delights of the franchise in all their glory, the release of Sonic Adventure 2 may have seemed wholly normal; a 3D platformer as was the order of the day, albeit with a more identifiable protagonist.

The jump into the third dimension brought with it praise and criticism, and the unfortunate manner in which Sega’s mascot was forever lined up in comparison to Nintendo’s Mario meant the hedgehog was always likely to appear stumbling in this evolutionary leap. The sequel - and the title up for review here - brought with it the chance to iron out the flaws and send the Dreamcast off with one final hurrah, and I still contend in many ways it succeeded more than it failed, it's just its failures were visible from space.

Visuals-wise, this HD makeover looks decent; nice and bright with some crisper edges, stable textures and minimal pop-in of enemies.  The CG cinematics are still 4:3, but thankfully with most cut-scenes using the in-game engine these are few and far between.  I found the audio to be a bit erratic, with voices dipping below the music and then back up, but other than that sound was as would be expected.

The first bullet in the chamber of the prosecution’s gun is a hard one to dodge - the introduction of Shadow the Hedgehog.  A strangely mature bizarro Sonic, an anti-hero to balance things out and offer the series something fresh.  Even for Adventure-apologists like myself it’s hard to make a case in defence of the much maligned Shadow, but the character himself - though a focal point - shouldn’t bear the blame for the skewed atmosphere the title offered.  That must lie at the feet of those who chose the story he was to feature in and how it was presented; the cringe-worthy scripting, hammy voice acting and a score that plumbs the depths of S-Club 7’s rejected lyrics bin (“rollin’ around at the speed of sound, got places to go, gotta follow my rainbow”)  and non-sweary rap to create tunes as catchy as the flu and half as fun. Why this Titanic studio headed into the iceberg of edgy yoof characterisation in such a way is hard to fathom.  Yet, were an original, Japanese language option there, the wound would have been lessened - argue all you want, oddness in a Japanese voice works so much better.

The plot is awful because of a key decision - and that harks back to the original Adventure - namely not to create an entire world for Sonic to inhabit, as was the norm for all platformers, rather to shoehorn him into our reality and make the pre-existing creations man-sized.  We have humans and anthropomorphised creatures mixing in a manner that is hard to stomach for all but the youngest, most accepting minds - watching a giant hedgehog look lovingly at a human girl screams all kinds of wrong.

The case against Adventure 2 looks pretty damning, but if you care to step away from the narrative and accept it as perfunctory, then you may just uncover a passable title merely suffering growing pains as it attempts to evolve beyond its roots.  Out of the early urban environments and peopled locations, the desert and jungle scenes are far more acceptably Sonic. The introduction of Shadow had one upside, the game splits between Hero and Dark stories, allowing you to tackle two single-player campaigns; get stuck in one and you can hop over to the other.  The mission structures are the same, with light and dark pairs controlling almost identically.  Sonic and Shadow’s levels are the same as the first Adventure title, fast platforming defined by the collection of rings and loop-the-loops.

Tails and Dr Eggman stomp around in robots, blasting their way through stages with lock-on targeting tailored towards aiming for high scores.  The final duo are Rouge the Bat (a new character) and Knuckles, whose levels are made up of treasure hunting for emeralds and keys.  An icon will turn colour and bleep when you’re in close proximity and clues are on hand to give you some subtle hints as to the next (randomised) location to search in this high-tech hunt-the-thimble.

The key point is constant variety, any one of the above would get monotonous.  In an ideal world the three differing styles would be woven into large, more expansive and layered stages.  However, that might have curtailed the main selling point - Sonic’s velocity, thus there was a necessity to keep things linear, with certain rail sections being easy feats of visual spectacle rather than examples of stellar platform flow.  They gave the people what they wanted - speedy loop-the-loops.  Knuckles/Rouge allow us to explore the wider plains and Tails/Eggman deliver the bombast with mindless abandon. In amongst the linearity there’s a little deviation to be had via upgrades to the characters’ arsenals that open up new routes.  Here though we butt up against the second biggie in terms of criticisms, the camera.  It’s the old controllable-when-stationary variant.  Start moving and it’ll snap back and point you in the direction you should be heading, meaning there’s no hope of backtracking and exploration without exceptionally tentative steps.  It can be massively infuriating -  and the way in which this title has been re-judged (as it was by the Gamecube crowd when it made the leap to Nintendo’s console post Dreamcast demise) shows how quickly we’ve come to demand full control even retrospectively - but the odd death from a slightly unseen enemy is the price we pay not to notice how undynamic it all is, and I still feel the gameplay only loses as much as it gains from the constrictive perspective.

What’s less easily stood up for are the myriad glitches thanks to the view chosen for you- a camera that swings round too fast, trying to snap back to a position it can’t hope to find when you’re tight to an object being a chief bugbear.  It can disappear into walls, leave you hopelessly unsighted and worst of all have an impact on your actions - the first time the camera spins and for some reason you fall off a wall is infuriating.

Thankfully, the same issues aren’t always apparent in the differing stages, hence why variety tries to save the day, and if you weren’t interested in the main game you can always kill some time with the virtual pet raising mini-game.  Hatch a “chao”, treat it nicely (or punt it around, who am I to judge?), feed it and bring it animals collected in the stages; train it, watch it flourish, evolve and enter it into races or even a spot of karate.  The premise worked better with the concept of the Dreamcast’s VMU (a memory card-cum-ultra-mini gaming device) but even in its absence it’s a characterful distraction. Add in a passable karting off-shoot to the main game, an entertaining two-player split-screen battle mode and multiple criteria for you to best each stage (rings, time etc) and this starts to look quite the bag of tricks longevity-wise.  The camera issues don’t go away, and the narrative elements still make The Jeremy Kyle Show look the epitome of cultured story-telling, but the core of what’s on offer, when stripped back to its components, is arguably pretty sound, and there’s an abundance of extras if it does get its hooks into you.

Slow on the uptake

The camera is still buggy and fans of the franchise from its Megadrive days would probably prefer to see Shadow make his nest in a soon-to-be bonfire.  If you’re able to take a step back though, write off the narrative elements completely and play the levels without the type of scrutiny one normally applies to a Sonic title of yesteryear, you could find yourself enjoying simple, linear level design and gameplay mechanics split into digestibly separate pieces.  The additions of virtual pets, an admittedly fairly run-of-the-mill karting game, a host of weapons to find, emblems to collect and stage-criteria to beat, mean at a budget price - if you’re prone to Adventure apologism like me - there’s enough to keep you coming back for a while.  It’s certainly not a classic, and can’t be rated as such, but perhaps it isn’t quite the monstrous start of the downfall it’s portrayed as.