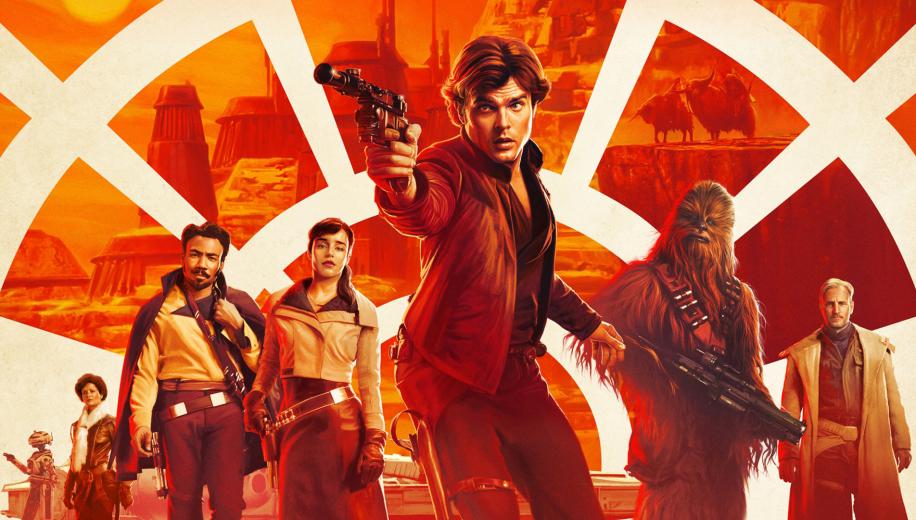 Neither as gritty as Rogue One, nor as divisive as The Last Jedi, the arguably unnecessary Solo is a fun but fluffy and overlong diversion.

It's hard to tell whether anybody was crying out for answers to where Han got his name from, how he met Chewie, when he won the Millennium Falcon or how he beat the Kessell Run record, and there were even less who wanted to see anybody but Harrison Ford in the iconic role. In theory, the same logic could have been applied to Rogue One, but that film was actually a nice little bit of something different for the Star Wars universe. Even if it was a story which didn't necessarily need to be told, the space variation on The Dirty Dozen was pretty damn effective and the closest thing we've had to genuine war in Star Wars.

Unfortunately Solo has none of that going for it. Hobbled by a seemingly cursed production - another one where the original directors were fired in favour of someone more 'Disney' (in this case, safe bet Ron Howard) - cursed by rumours about acting coaches required to help the star become Han Solo (beyond, of course, an ability to act), and characters recast or cut entirely from the final film, it's a miracle that they ever managed to around a decent finished product for the tight Summer release date, but after the fallout from The Last Jedi, it's no surprise that they pulled out all of the stops.


Perhaps the antidote to the more ominous Rogue One was something light and fun.

The end result isn't a complete misfire at all, and is actually a perfectly serviceable little movie, largely dodging any controversial territory to avoid the potential divisiveness of the last film (although the appallingly written female droid arc nearly kills it, and Paul Bettany's Christopher Walken impersonation is all over the shop) and certainly not bearing any of the hallmark traits you'd expect from a production beset by so many problems (c.f. The Predator). It's light and inconsequential, but it affords viewers a fair amount of the fun that may have been missing in the last couple of instalments.

That doesn't change the fact that it doesn't really add much to this universe. Perhaps Star Wars has been lacking somewhat in the space cowboy vibe first expounded by the original trilogy via the Han Solo character, but never really addressed once again in the films. Perhaps the antidote to the more ominous vibe of Rogue One was to do something light and fun, and if that's what you want, then Solo certainly has those traits in spades, but it really is of very little consequence.

For one of the most expensive films of all time, this is hardly a space epic but for in sheer length, boasting a bloated, endurance-testing runtime which is hardly packed with humour, memorable characters or exciting action, instead offering an initially awkward but eventually tolerable young interpretation of the beloved character as he skits around the universe encountering friends and foes, old and new. Alden Ehrenreich at least has a blast, once he loosens up a little, even if he is never really the Han Solo we know, and would probably be better regarded as just another character in the universe, and he enjoys solid support from Donald Glover's Lando, Emilia Clarke (who, oddly, also takes a long time to loosen up - with the early exchanges between her and Ehrenreich feeling like amateur auditions), and the easy star of the show, Woody Harrelson. They do their best given the pre-defined constraints of many of the characters, and by the end of it all, most should likely be on board.

Many blame the significant Box Office failure of Solo (the first ever Star Wars bomb) on two things - the Last Jedi fallout, and general Star Wars saturation and consequent apathy, but really neither of these elements explains the seemingly unstoppable success of the Disney/Marvel model, which has involved churning out many more movies, over much shorter periods, over the course of the last decade. The reality is that Solo was always an unnecessary enterprise; a somewhat uncomfortable fit in this universe that risked alienating older Harrison Ford/Han Solo fans whilst hardly offering much to attract the younger generation, and arrogantly pedalling in an overlong feature that has the audacity to set itself up for a sequel that many will be even less enthused to go to see at the cinema (this was the first Star Wars film for many that didn't draw fans to the Big Screen). That doesn't stop this being fun, at a pure entertainment level, but this is hardly the Star Wars classic that you were looking for.


It's hardly going to be used to demo equipment, but it's exactly the way it was supposed to look.

What's immediately worthy of note is that this is one hell of a murky film by design. Those who have seen it at the cinema know what to expect, but those coming straight into it on home formats are going to be shocked and perhaps even think there's something wrong with the presentation. There isn't. This is the way it was meant to look, only arguably even better thanks to some great implementation of HDR.

Detail at least is great, lapping up textures and finer nuances - Chewie's hair blowing in the wind on the beach looks fabulous - with a style that is inherently softer around the edges of the frame, but affords strong observation centre-target. The colour scheme, as noted, is really muddy and grim, but the HDR and WCG enhancements leave room for certainly key elements to pop off your screen. From the dials and lights on the Falcon to the thrusters on any of the vehicles, to blaster bolts and energy weapons arcing across the screen, there are some superb highlights which strike out from the murky maelstrom. The lightning during the Kessel trip is blindingly intense, as is the glow of the Maw. It's hardly going to be used to demo equipment, but it's exactly the way it was supposed to look, only popping with vibrant highlights.

Disney continue their trends of releasing discs where you have to crank up the volume on the audio track to get anywhere near the same listening level as other discs which are dialled down to a more normal level. Solo sports a bells and whistles Dolby Atmos track founded upon a strong Dolby TrueHD 7.1 core, and cranking it up significantly does leave it aurally on a level playing field with some of its non-Disney counterparts, but fans - understandably - shouldn't really have to be that forgiving anymore.


Few are going to celebrate it as demo territory (particularly if you're fed up with the whole low-level volume mastering), but it's still a very good track.

Nevertheless, from a technical standpoint, that extra volume doesn't come with any overt consequences, leaving this a very good track once you correct its level. Dialogue remains clear and coherent throughout, whilst effects lap up the thrum of skittering engines, the whine of electronics, the whipping sound of spinning a gun, and the general background environmental din of a galaxy overrun by the Empire. The opening sequences are awash with ambient bustle, whilst the beachfront sequences have crashing waves and whooshing wind.

More overt effects dominate, of course, like the Kessel run, the train setpiece, the chases and space battles. Blasters have their signature sound, grenades dentate with a little LFE weight (perhaps the only thing really lacking) and thrusters fire with intensity. The score suits the piece and provides a welcome, pervasive backdrop for the proceedings, championing the movie along at a pace which does not always reflect the on-screen action but goes some way towards keeping you engaged. There's still a little weight lacking, and few are going to celebrate it as demo territory (particularly if you're fed up with the whole low-level volume mastering), but it's still a very good track.

Solo hits UK 4K Ultra HD Blu-ray complete with a decent though hardly exceptional selection of Extra Features relegated to the accompanying Blu-rays. There's no Commentary here, but a Roundtable Discussion with the Director and Cast makes up for that somewhat, and there are a number of supporting Featurettes exploring the story and the key scenes and characters, with the disc rounded off by a selection of Deleted Scenes. For all the grand setpieces and fun moments here, there isn't really anything consequential about it.

Solo is fun, and perhaps that will be enough to satisfy, particularly in the comfort of your own home if you didn't feel it necessarily drew you to venture forth for a Big Screen showing. It is overlong, and over-indulgent, never quite capturing the essence of the iconic characters it seeks to re-explore with fresh eyes, but still having a commendably good shot at it.

This still leaves a somewhat uneasy finished product that probably could have learnt a lot from something like Serenity in its efforts to offer fun space cowboy thrills with consequence. For all the grand setpieces and fun moments here, there isn't really anything consequential about it, and the notion that it leaves things open for a sequel is borne from foolhardy arrogance that is wholeheartedly unjustified.

Disney's 4K Blu-ray release at least delivers a technically faithful presentation, which pops with some great highlights but is limited by the intentionally murky theatrical style, leaving it hardly demo territory. Disney also don't make this the exception to their rule of mastering audio tracks at extremely low volume levels, which is sure to add to the mounting frustration of fans who have been living with this odd trait for years now. It shouldn't put you off picking this up; it is easily the best way to enjoy the film.