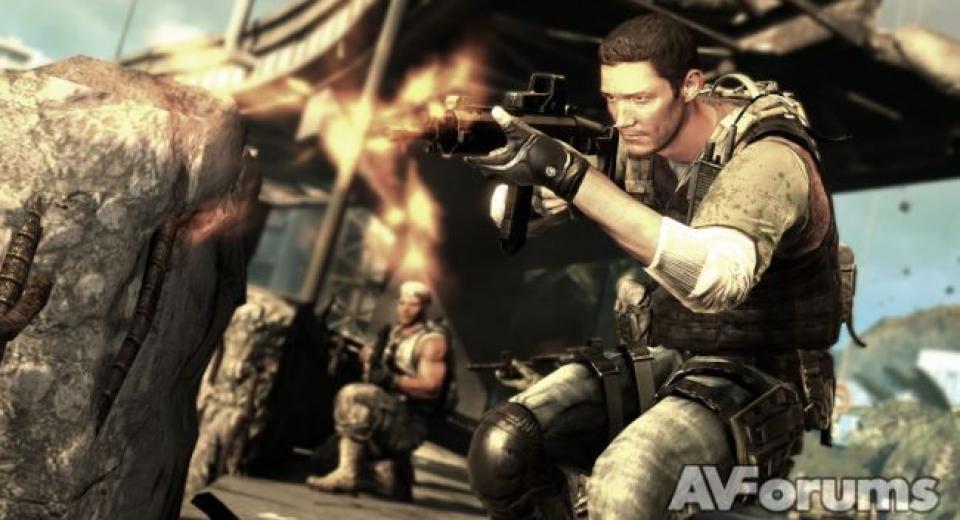 It’s never quite clear what you’ll end up with from an iteration of Sony’s stalwart SOCOM series. Part 3rd-person shooter and part tactical action game, the original was lauded on release as one of the first genuine attempts to get PlayStation owners online and cursing up a storm - even going so far as to include a headset in every giant boxed copy. Its single player campaign was largely forgettable and basically perfunctory, but that didn’t matter; the ability to hurl abuse at people halfway round the world and audibly issue squad commands to AI teammates earned it enough of a following to launch a full-on brand. It certainly wasn’t harmed by the fact that the original SOCOM actually played pretty well too, with some clever multiplayer level design sustaining interest over the long haul. As brilliant as that headset was (I rediscovered a beta copy the other day, much to my delight), it really started to shine in SOCOM 2, which took the formative elements of excellence laid down by the original and consolidated them into arguably the best game in the series thus far. Well-produced PSP versions (which played accurately despite the lack of a second analogue nub) and another couple of PS2 updates followed, but by now the series seemed to have peaked - resulting in a general apathy and dwindling patience from an audience quickly becoming used to a level of quality and shine that SOCOM never seemed to progress from. Sony didn’t seem that interested in pushing it as a key title any more, and yet as a series it still managed to clock up well over 11 million sales despite remaining relatively low-key. Fast-forward to 2011 and in the age of Call of Duty and Battlefield, the number of people to whom Zipper Interactive’s series remains relevant may well be at a critical level. The protracted development period and bizarre online problems of previous PS3 instalment Confrontation ultimately cost some of the reputation of the developer and another chunk of the audience, and so Special Forces (or SOCOM 4: U.S. Navy SEALs if you live stateside) may well be a last redemptive throw of the dice for a once-proud franchise. Whether or not Zipper has learned any lessons from previous failures is sadly still up for question however. Off the bat, Special Forces doesn’t give out a great impression. Static loading screens that linger long enough to be annoying, multiple superfluous icon explanations and the obligatory logo splash screens bog down the experience before you even reach the menu, and from there on out nothing displays any character. The scant few menu options at least point you in the direction of the action quickly enough, but a distinct lack of flair abounds in all the presentational features. It’s consolidated by a score that’s part Tony Scott action film, part Steven Seagal 90’s disaster, and mostly forgettable. Thankfully the same cannot be said about the in-game audio, which is impressive in its rendition of the various modern rifles and ordinance that routinely explodes around your feet. It’s no Battlefield in terms of atmospheric echoing buildings or convincingly conveying a sense of cavernous space, but it does the job in all the right departments, with surround effects deployed convincingly to suitably heighten the immersion. That attachment is brought back down to earth with a bump when considering the visuals however, which strive for Call of Duty style cleanliness but all too often come up as drab and relatively uninspired. It’s by no means a bad-looking game, and certain levels - such as a rain-soaked night-time creep around a moodily-lit dock yard - feel fairly well executed and hint at a broader level of polish that never quite takes root. All too often the environments feel forced and a little too cookie-cutter to stand out in any meaningful way, leaving SOCOM’s traditional tactical action to carry the brunt of the experience. Unfortunately it turns out that isn’t quite enough. Again, not that SOCOM is particularly bad in any element of its execution, but little stands out about the formula that personifies the series any more. Third-person shooting is its clear mandate, and in those respects things function perfectly well. Controls are smooth on the PS3 pad or via PlayStation Move, and basic elements such as targeting accuracy and the cover mechanic work as intended. All of the weapons offer decent feedback and response, and the sense of stopping power is strong enough to make shooting enemies a fairly tactile experience. It’s no Red Dead in terms of realistic humanoid-ballistic physics and the environmental damage is a little light, but it gets the job done with enough quality to make things tick from one scenario to the next. Perhaps the most interesting elements of Special Forces are the squad commands, but then they’re essentially the same as those that have held the series in high esteem from the beginning - minus the microphone support. Descending on an enemy choke point and setting up targets for each of your commandable teams before manoeuvring them into position is entertaining stuff, and when a perfectly executed takedown occurs there is a genuine sense of satisfaction from even those basic instructions. The AI often lets the side down however, and your comrades will occasionally get stuck on the scenery or get spotted at the crucial moment for all hell to break loose. Those sequences are entertaining in themselves, but the tactical underpinnings lose a little impact as an inevitable consequence. Unfortunately there is little to compel anybody to continue down the singleplayer path besides those sporadic moments where everything clicks. The storyline is as predictable and routine as they come, with your squad of British hard cases joined by a team of South Korean specialists under the command of a troubled but attractive female lead, and off into battle amidst the jungles, deserted streets, dock yards and warehouses that span the game’s 12 levels. None of the characters are memorable, the voice acting is fairly middling, and the supporting cast are literally pointless; you simply won’t care who lives or dies for the majority of the game. The elements of physical tension between the bond-esque commander ‘Grey’ and his Asian counterpart ‘45’ add a tiny bit of interest to proceedings, but it all quickly fizzles into ‘just another shooter’ territory. With the singleplayer a definite damp squib it’s down to the multiplayer to deliver any long-lasting value for Special Forces, but again things have ended up a somewhat mixed bag for a series with such a proud lineage. The five co-op maps are probably the highlight, offering up some decent action against the AI with a few of the campaign scoring tricks from the likes of Halo 3 and Reach thrown in to sweeten the mix. Indeed if the singleplayer campaign was forsaken entirely for an expanded roster of these and a lower price then Special Forces may have been a more intriguing prospect, such is the strength of the experience over the regular missions. Once those are done though, competitive multiplayer is a huge letdown. Bomb Squad is probably the most enticing new addition to the roster of staple match types, tasking you with playing out a Hurt Locker style scenario in which enemies are descending on your location to take out the designated disposal expert. Although there were scant few opportunities to try this out prior to launch, the lingering feeling was of a mode that could shine in the right circumstances, much like the old GRAW and GRAW 2 co-op firefight-style sequences. A timely reminder that holding a single position can be much more entertaining than constantly moving around, provided the right set of challenges are laid down. As for the maps themselves, they’re decently thought out and well implemented, but there’s no escaping the fact that Special Forces is one hell of a buggy experience out of the gate. Hopefully the final release will be patched fairly quickly, but the frequent disconnects and extreme amounts of lag do not bode well for a satisfied fanbase on launch. If this happened once or twice then things would be forgivable, but it cropped up a hell of a lot during the few play sessions I experienced, and after a cursory glance at the experiences of other reviewers it seems a common complaint to uphold. The obligatory weapon unlocks and XP system goes a little way to providing extra draw despite those issues, but that’s hardly a bullet-point to hold aloft in this day and age.
Whilst I would love to say that SOCOM: Special Forces is a resounding success and a return to form for a developer and a series that I hold a lot of respect and fond memories for, unfortunately that just isn’t the case here. In moving the action to a Call of Duty-lite experience with one foot striving for cinematic ambition and the other shaking on some fairly wobbly previous-generation mechanics, the singleplayer just doesn’t cut it against the competition. Multiplayer still has a spark and glimpses of what could be an entertaining and vibrant suite of killing theatres, but again technical limitations and a sheer lack of polish hamper even the best efforts at innovation.

SOCOM: Special Forces isn’t a bad game and it isn’t a good game, but in an arena as competitive as this, sometimes being in the middle is the absolute worst place to be; you just need to take a look at the groaning shelves of your local games emporium to realise why. Hopefully this is not the last we’ll hear of SOCOM, as retribution is now firmly overdue for the series.