The Roadwarrior meets Oldboy on Runaway Train for some Matrix philosophy 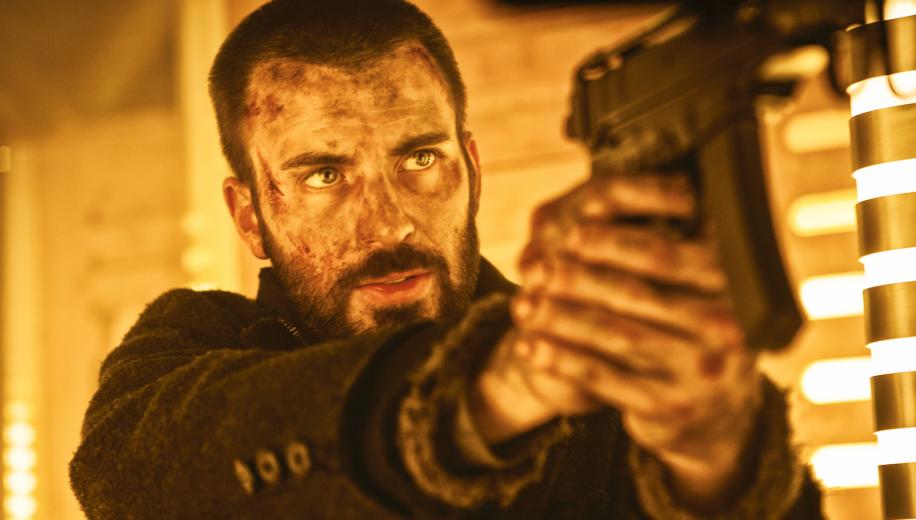 A long seven years late and this now strangely timely post-apocalyptic outing finally makes its UK debut just in time for the launch of the Netflix series.

Snowpiercer had an extremely troubled production history. Director Bong Joon-ho may have recently found international success with his Best Picture Oscar-first award for Parasite, but he'd already had some international recognition as far back as 2007 for his surprisingly effective creature-feature The Host, and Cannes regard for his follow-up, 2009's Mother. He began producing Snowpiercer in 2007, captivated by the source novel, and intent on putting his own spin on it. He secured a strong international cast including the likes of Chris Evans, who'd only just taken up the shield as Captain America, as well as Tilda Swinton (also in Boon's Netflix production, Okja), the late John Hurt (Hellboy), Ed Harris (Westworld), Octavia Spencer (Apple TV+'s Truth Be Told), Ewan Bremner (Trainspotting), Alison Pill (recently in Devs), and Jamie Bell (Fantastic Four), as well as South Korean actors Go Ah-sung and Song Kang-ho, who had both worked with him on The Host (Song would go on to further impress headlining Parasite). Shot on a meticulously constructed train set - complete with moving gimbal - it was a hell of an endeavour for this still relatively new director, of a 'blockbuster' scale which he found extremely taxing (subsequently vowing to do smaller films instead).

An international production, and Bong's first English-language film, Snowpiercer would go on to wow critics and audiences around the world, both on the festival circuit and on mainstream theatrical release, and in 2013 it should have been rightly lauded as one of the best films of the year. However, this was all derailed when Harvey Weinstein - who held the distribution rights for not only the US but also the UK, Australia, New Zealand and South Africa - demanded extensive cuts, and a new opening and ending, which Bong was not prepared to agree to. As a result, Weinstein delayed the release of the film for a year, and then released it in a whopping... eight cinemas. With the rest of the world enamoured, he eventually relented (likely seeing the dollar signs) and gave it a wider release, but the UK has unfortunately suffered the worst here, not only with a complete lack of a theatrical release, but also a lack of home release until now. This may have been mitigated by an ability to import, but subtitle issues (only 80% of the movie is in English, with key parts requiring subtitles) left many international versions a frustratingly incomplete experience for UK viewers not versed in Korean. Shockingly, it took over 5 years - to November 2018 - for the UK to gain access through Amazon Prime video, with it subsequently playing on Netflix UK last year. Now, on the same day as the reboot series, we finally get a UK Blu-ray release, all of which leaves this a contender for one of the worst treated gems in cinema history.

As a film which clearly plays out the best the first time you ever watch it (not to say it is not rewarding on subsequent views, but the first is a crescendo of surprises - a claustrophobic opening act betraying very little about the bloody, eventful, and ultimately colourful and diverse voyage that ensues), Snowpiercer really should have very little intro before a first watch, with its post-apocalyptic premise positing a future where the world is encased in snow and ice, and the last few survivors are aboard a very big train which laps the entire earth using a seemingly unstoppable 'perpetual' engine. Unsurprisingly, it's not all fun and games abroad the train, with the last few carriages of largely enslaved 'lower class' citizens conspiring to revolt and reset the balance in a train which basically forms a loosely veiled reflection of society's class structure.

Clearly playing right into Bong's wheelhouse of films with class-based socio-political themes (c.f. Parasite), Snowpiercer has a blunt force approach to its underlying theme atypical to most conventional English-language blockbusters, eschewing traditional arcs of romance and wholesale heroism in favour of darker and more obsessive character machinations that give it an edge. Indeed it's almost unsurprising that someone like Weinstein would see this as not working for a US audience, with spectacular action, inventive setpieces and escalating tension juxtaposed with some very interesting but arguably audacious moments of reflection (Chris Evans' dialogue with Song Kang-ho is arguably one of the best scenes in the film, and a tremendous performance from Evans, but was also a primary focus for Weinstein's 'cuts').

In these particularly challenging and perhaps even somewhat claustrophobic times, it's a topical post-apocalyptic thriller to (re-)discover; an audacious, ambitious project which requires – demands – your absolute attention, and rewards it with style and substance; sci-fi smarts and spectacular side-scrolling action.

Snowpiercer was shot on 35 mm, with the majority of effects relegated to exterior shots of the train, leaving the extensive set-based cinematography looking really very good indeed, bolstered by some imaginative cinematography and veritable style, and bristling with visually diverse scenes courtesy of the varying designs of the carriages and 'worlds' therein. Really, it would have been nice, given the time that has passed, if Snowpiercer had had some kind of 4K release, but given the fact that even Bong's Oscar-winning Parasite only secured a 4K release in other territories, the UK likely wouldn't get a Snowpiercer 4K in any event, even if the rest of the world had it. Still, this Blu-ray looks very impressive indeed, yielding strong detail and texturing, some excellent nuances particularly in the grimy early setpieces, and excellent close-ups showing the haggard, dirty, bloody and battle-damaged faces of the main characters.

The colour scheme benefits from the unusual and innovative setpieces, and isn't merely restricted to that dour, grim post-apocalyptic cast that pervades the first act, with some real visual flourishes shining on the presentation, and strong blacks (and peak whites) to support them. There's still a little inherent source softness, although arguably a better (4K) presentation may have only further highlighted the limitations in some of the (largely good, but certainly far from perfect) CG exterior shots, of the train in particular, and there's no distracting damage or digital anomalies to mark down the demo image with.

Snowpiercer's audio, much like the video, could have benefited from the extra mile to get us an immersive Dolby Atmos track, but the standard DTS-HD Master Audio 5.1 mix is a very good offering nonetheless, bringing the at times literal rollercoaster ride to life with aplomb.

Dialogue remains well prioritised, clear and coherent throughout, and keenly disseminated across the front and centre tracks, whilst effects get more expanse across the array, with bullets echoing out, melee weapons inflicting audible damage, and that perpetual engine offering a permanent backdrop to the train-based proceedings. The score is intermittently inventive too, sometimes non-existent, and sometimes suitably overwhelming, as effects are drowned out and the audiovisual experience overtakes. It's a strong, frequently even demo offering, which will more than make do particularly for those who have never even seen the movie before.
﻿

Given the potential - particularly as a debut Blu-ray bow - for this to be an utterly bare-bones release, it's nice to see Lionsgate go the extra distance to provide some solid extras.

The meat of the supplemental features comes in the form of a near-hour-long Documentary that charts the production in detail, from its comic origins to the end result. There are a couple of shorter, fluffy EPK pieces which dip into the characters and skim over the production in a matter of minutes, as well as the brief animated prologue which featured on the French disc.

Parasite's Bong Joon-Ho largely ended his aspirations towards larger, international productions following some clearly bad experiences making Snowpiercer, and the film itself has been held back from release (in the UK at least) for a shockingly long period of time, now - a whopping 7 years later - finally getting a Blu-ray release. It's a hell of a ride; an unusual blockbuster event movie with teeth, with an all-star cast and a superb comic-book basis which translates into a tense and involving post-apocalyptic thriller.

A tense and involving post-apocalyptic thriller

Lionsgate's UK Blu-ray release does belated justice to this 2013 modern classic with excellent video and audio and a strong enough selection of extra features. A 4K release would probably be too much to ask for, so in the meantime fans should pick this up.