Sometimes things get lost in translation 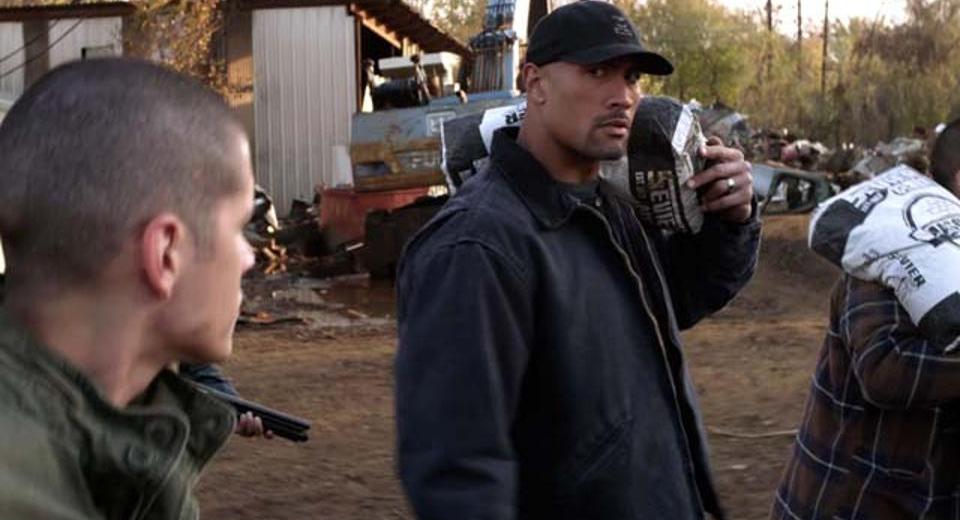 Sometimes there’s something lost in translation with inspired-by-true-events movies that focus on a nuance specific to a particular nation. In this case, however, it is probably the least of the film’s problems.

In the United States, clearly in an attempt to crack down (pun intended) on the drug problem, new laws were put into motion to penalise dealers severely with mandatory sentences that were dependant on the quantity of drugs found on them and not open to the discretion of the Judges passing sentence. The idea was that, by heavily penalising easy-to-catch street dealers, they would take care of the problem at a low level and remove the bottom layer of the pyramid, making it much harder for the higher – harder to catch – cartel bosses to shift their product.

Distribution charges could result in a mandatory 10-year sentence for first time offenders which, as the movie makes clear, is normally higher than the average sentence for rape and murder offences. Indeed the only way to mitigate your circumstances is by providing the authorities with viable information in relation to another individual who can then be convicted instead; becoming a snitch.

One of the major flaws with this otherwise ostensibly clever plan provides premise for this movie. Jason Collins is a young high school graduate about to go to college. Foolishly he agrees to take delivery of a parcel in the mail, on behalf of his best friend – a parcel he knows contains several hundred pills. It turns out that the delivery was all a part of a sting operation – the best friend had been charged with distribution and was setting up Jason in order to reduce his sentence. Jason gets sentenced to the mandatory 10 years in prison, and has nobody that he himself can ‘snitch’ on; and he refuses to set anybody up (in the way he was set up) despite the fact that his lawyer advises him that this is the only way he can get a reduced sentence.

Jason’s estranged father feels responsible for the mess his son is in, and decides to go to extreme lengths to help him – to do whatever it takes to win the US Attorney’s favour and get his son released. To that end John agrees to go undercover with some local drug dealers and organise distribution of their product through his truck company in order to allow the DA to make a significant bust and guarantee her re-election. In turn, she’ll reduce his son’s sentence. But John will have no help and will shoulder all the risk himself.

Snitch is a surprisingly down-to-earth film for Dwayne ‘The Rock’ Johnson to take. In fact, it’s just about the most realistic film he’s ever done (well, arguably none of his films have been in the least bit realistic, so that wasn’t much of a hurdle to jump) and, in turn, he puts in possibly his most dramatic performance. I know that’s not much of a stretch either, but it’s certainly nice to see him try.

Few action movie stars really break away from outright action – other than perhaps to ill-advised family comedy (which Johnson already did in features like Tooth Fairy) – and, for many, it’s a very hard step to take. After all, you’re risking alienating your entire fanbase. And who is going to take you seriously in a dramatic role when all they’re expecting you to do is flex your muscles and/or shoot people. Arnie and Van Damme never accomplished it, Snipes thankfully had some history with it before he became an action star; Seagal attempted it once in The Patriot, which suffered painfully as a result; and Sly pulled it off with the superb Copland. Johnson, who hasn’t had anywhere near as many decades in the business as any of them, has an uphill struggle with it here.

You see, whilst he does indeed put in a competent, engaging dramatic performance as the flawed, distinctly non-super-hero dad who struggles to do whatever he has to do to help his son, you can’t help but want him to pull out the big guns. You can’t help but wonder why he has difficulty taking on a group of street dealers, or flinches whn staring down the barrel of a gun. His film history is so impenetrably action-skewed (Faster, The Rundown, Fast & Furious 5 and 6, G.I. Joe 2, Walking Tall) that it just feels unbelievable that he is incapable of the unbelievable. So, try as he might, he ultimately can’t escape his own trademark tough guy personas. It’s no surprise really – in the same year where he is playing seemingly invincible muscle-bound action heroes in no less than four films (including Roadblock in G.I. Joe: Retaliation and Hobbs in Fast & Furious 6), why would anybody buy him playing... a dad?!

Ultimately, too, the film wants to have its cake and eat it – it wants to deliver a profound message about the damage done by these new drug laws, but it also knows that, at some stage, it is going to have to throw some action in your direction. Which is why the trailers are dominated by the only action in the entire feature – the final sequence in the movie; an altogether well-shot but fairly underwhelming (at least by Johnson’s standards) action sequence. So if you came here looking for action, you came to the wrong place.

Unfortunately this also means that the anti-drug-laws message is somewhat drowned out by circumstance; perhaps diluted by Johnson’s own action history – past and present. Sure, it’s not as bad as when Seagal tried to preach about environmental consciousness after blowing up an oil rig in On Deadly Ground, but it’s still action which is essentially the movie’s own downfall. Had there been no action whatsoever, there would have been no misleading trailer; no expectations from the action that was provided. Of course you could argue that this would have also been the case had Johnson not been cast in the role, but I guess that was the point – he clearly felt strongly enough to want to make this movie.

With supporting bit parts for Benjamin Bratt (sporting the same Tony Montana / Scarface-like thick accent that made him the perfect choice to replace Al Pacino in Despicable Me 2); Susan Sarandon – who phones-in her performance and is utterly wasted; Walking Dead’s Jon Bernthal as an ex-con who reluctantly helps out our hero; Michael Kenneth Williams (The Wire, Boardwalk Empire) back on home turf as a dealer; and Barry Pepper sporting a ridiculously whispy redneck beard as a DEA Agent, Snitch tries its best to tread a convincingly dramatic line.

This kind of everyday-guy-becomes-a-normal-hero story does and can work: both the original French Pour Elle and its US remake, The Next Three Days – starring Russell Crowe – delivered satisfying dramatic beats in what was still a thriller about a husband doing whatever it took to save his incarcerated wife, without ever crossing into action thriller territory. Had they cast Johnson in the role, however, things might have been different.

Snitch has a valid commentary to make upon one aspect of the legal system in the States, but fans of Dwayne Johnson’s usual action output will probably be shocked to find him playing it so straight, and may struggle to remember the message amidst the tepid, realistic action and true-to-life moral dilemmas. Whilst it might get an A for effort, there’s no question that the film doesn’t fully achieve what it set out to do; it’s neither an engaging action-drama nor a tense semi-factual drama, instead treading a worst-of-both worlds middle-ground, and doing so whilst championing Dwayne ‘The Rock’ Johnson as its star. In a year where everything else he’s done has been pure action, and in a career where he’s never done drama without having to flex his biceps, Johnson took a risk making Snitch. For that, he deserves credit. But it doesn’t make this movie any more worthy of your time.
Dwayne Johnson does realistic? Certainly a first. Unfortunately, despite valiant efforts to turn in a serious, dramatic performance without having to resort to fists and gunfire, Johnson still can’t quite convince in this down-to-earth role after having spent so many years in his career playing overblown action heroes. The film further suffers from having a strong message which is only diluted by its desire to play to both camps – it clearly wants to cater for Johnson’s action entourage, whilst also delivering a commentary upon the US legal system; two things which, when combined, result in a remarkably tepid affair that neither thrills, nor provokes any huge debate. Pondering the byline alone – first-time non-violent drug offenders receive longer prison sentences on average than those convicted of rape or manslaughter – gets you most of the message right there, with the rest being lost in a brief gust of lacklustre chase action, and trampled on by Johnson’s inescapably huge boots.
Don’t expect an action film; and don’t expect enough else to make for a truly satisfying watch. This is average play-it-safe filmmaking, when it had the chance to either be raw and provocative, or outright switch-your-brain-off entertaining. Aiming for both delivered neither.