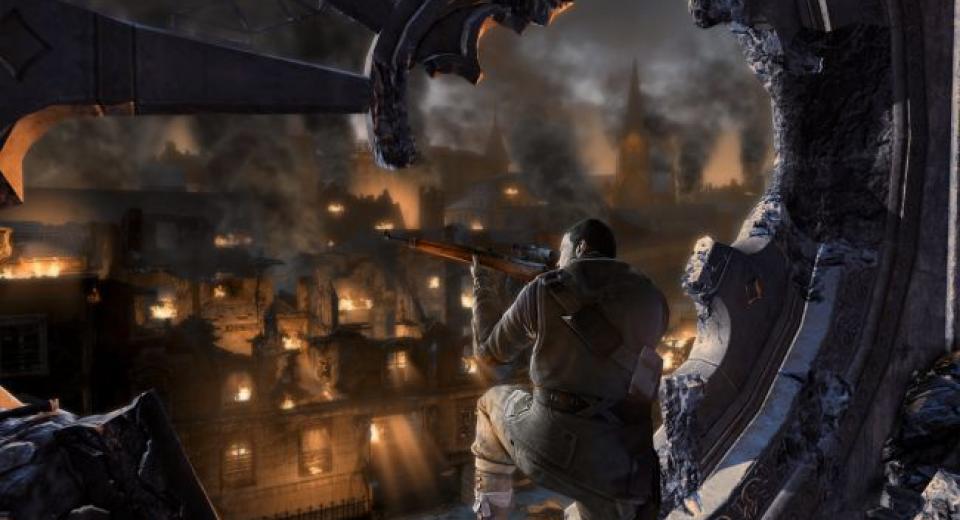 Patience, precision and proficiency; the three p’s that you need in order to be a successful cold-hearted killer. The problem is though that the gaming market is filled with metaphorical tumbleweeds when it comes to decent sniper titles heading our way. Sure we have had the occasional flutter in the form of Sniper: Ghost Warrior and the token gesture of a sniper level in your big-named First Person Shooter (FPS) but we’ve never had anything worth shouting home about.

For the 99% of you reading this that are unaware of Rebellion Developments’ previous titles, going by the same Sniper Elite brand, then this is not the first title to be released boasting sniping entertainment in abundance. The first title was seen on PS2 in 2005, whilst the second title launched on Wii in 2010 and now we see this remake of the first game on PS3, 360 and PC. Yes you read that right; a remake only seven years later of a game that hardly anyone heard about.

Nothing much has really changed from the past two titles though as protagonist, Karl Fairburne, is on the same mission as before which sees him infiltrating Germany in the last few days of WWII. Why? Because he is trying to kill the scientists behind Germany’s devastating V2 bombs before the Russians can get their hands on them.

Much like James Bond he has a licence to kill anyone he sees on his way, Russians included, even though they helped the allies throughout the war, and he’s just as cold hearted when it comes to dispatching them as well as the remaining Nazi forces. So as you’d expect from a title that is keen to let you kill your enemies in your own way, Sniper Elite does exactly that. To some extent it does anyway; there is more than one way to take down a street full of soldiers, whilst a lot of environmental help will also creep into your methods. There are missions where radio transmissions, church bells and bombing runs will all mask any noise you make from your weapon which is a neat little feature.

Your progress is marred somewhat by the unreliable checkpoint system which will either save your game periodically or not at all and nowhere in between. One save could see you restarting halfway through a mission whilst another might send you all the way back to beginning. This wouldn’t be such a problem if you were reloading because of your own mishaps or negligence but most of the time a reload will be forced because of the AI’s sensitivity of detecting a threat; but more of that later on.

The shortcomings with the save system are relieved every now and again when a satisfying set-piece crops up within the otherwise bland set of missions. Whilst many of them see you planting explosives and retrieving packages in forgettable street settings, there are moments of something greater when you have to infiltrate an explosives compound or make your way through a bomb-stricken church. When chances arise to take out multiple enemies at once or string together an elaborate distraction plan, this is where Sniper Elite shines and shows off what it should do more. There are fewer satisfying moments than when you can sit tight and wait for two enemies to line up perfectly before sending lead flying through both their skulls or when you group them up before shooting the nearest explosive container.

The problem is though, that these moments are a mere glimmer of something great lost amongst an otherwise bland set of mechanics that fill the rest of the game. It seems strange that, given the nature of the title, most of the time you will find yourself charging head-first into a plethora of bullets and mayhem as opposed to taking your time to take out your targets individually.

This is not helped by the Nazi and communist soldiers who have been implanted with hyper-sensitive hearing aids that allow them to sense even a mouse drop a fart. So when it comes to slinking behind someone, forget about it; you might as well just pop them off and give your position away to give yourself a better chance of survival.

Both sides involved in the war must have also genetically cloned a pair of twins with to fill their squads because they all know your whereabouts as soon as you are detected by one of their allies. This isn’t because they’re in your vicinity either; enemies who come flying round the corner from a new section of the level all know your location as if you were holding a ‘ SALE’ banner above your head. Sadly, there are further issues with the AI; enemies all have an uncanny knack of negating kick-back from their weapons and constantly popping off precision shot one after another. No matter what the distance, you can guarantee that you will be hit repeatedly by an MP40 or PPSH-1 even though you know this is impossible.

Sniper Elite never seems to punish players for taking the easy way or praise them for sitting comfortably behind cover, using their binoculars to scope out any threats and picking them off one by one. Anyone who tries to assault your stronghold can be taken out with traps laid to cover your tracks. At your disposal, you have a series of items that will aid you on your travels such as land mines, trip mines, grenade and an infinite selection of the finest rocks you’ll ever see.

The most satisfying way to take down foes is through this method though thanks to a set of cinematics that are in place to demonstrate how deadly your shots can be. Boasting an excellent array of sequences that show insides explode, bones break and blood fly in an X-ray inspired fashion, it’s hard not to appreciate a death sequence. Now this may be a rare error and one that was also caused by my own system but during these cinematic sequences, my console crashed 5 times in the space of one morning. What with the dodgy checkpoint system, you can imagine the frustration of getting half way through a level. Sniper Elite boasts a co-op mode whereby players can partner up and take down targets in a spin-off from the main campaign and, assuming you have someone to play with, this is a much more satisfying experience as having someone by your side makes up for the problems with the AI. Whilst one player can scope out any threats and  for their team mate, the man on the ground can infiltrate enemy territory and supress any marked targets silently. If it so happens that your comrade becomes a bit sloppy on their way and things become a bit hectic then this can provide infinite entertainment by seeing who can survive the longest and pick off the most baddies.

If it weren’t for the co-op mode then the game would be hard to recommend based solely on the single player mode. But thankfully, there is enough mischief to be had between players in order to make the game a much more entertaining package.

Sniper Elite V2 offers up a heap of fun, albeit in the wrong context at times considering that the key of this game is in its very title. Whilst a sniper experience is up for grabs for those who can work around the game's flaws with the AI and mechanics, for everyone else they may well find themselves taking the easy option by going all guns blazing in some areas after revealing their location with a resounding rifle shot. Overall though, thanks to the co-op mode which is rather entertaining, V2 does warrant a play through and should be played by those who are fans of the genre.