A change of pace from your everyday third person shooter 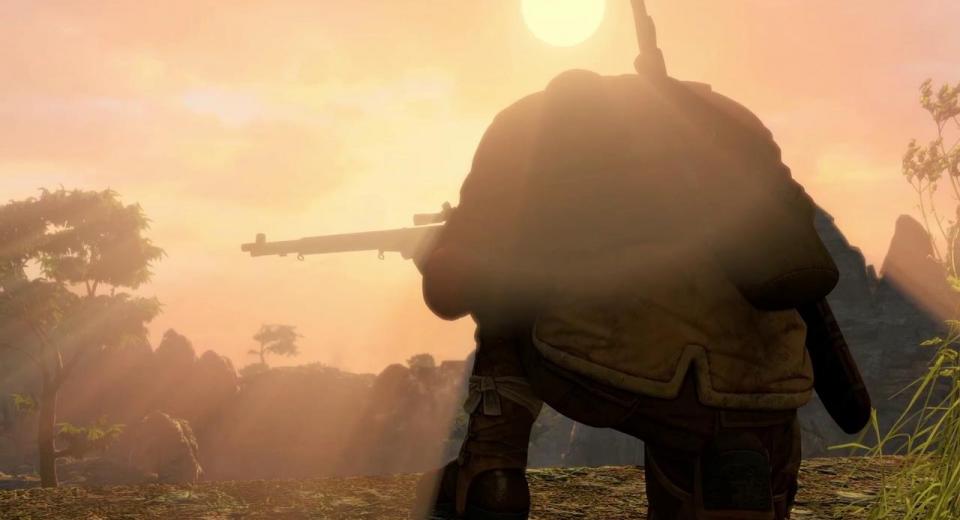 You pull the trigger. Everything stops. A wave of satisfaction washes over you, all that's left to do now is watch. The camera pans as your projectile traces through the air until finally meeting it's victim, time slows further still and you are treated to a detailed depiction of just how bad a day your target is having.

This whole process may take less than 10 seconds and in a hours worth of gaming it certainly wont occupy the bulk of your playtime. You see despite the fact that Sniper Elite III's "hook" is it's borderline sadistic X-Ray kills; the actual game is in fact a lot more subtle than that, the climax of many encounters may be a few seconds of carnage; but to get there you will need to adopt a far less violent approach.

When it comes to stealth mechanics Rebellion might just have used every single one in the book here. An eye icon on your HUD lets you know how ghostly you are being at all times, route walking enemies with handy alert meters go through several stages of alertness and suspicion; then once you finally kick the hornets nest and are subject to a hail of automatic gunfire you get a ghostly silhouette at your last known position so you know exactly where not to be. you are treated to a detailed depiction of just how bad a day your target is having
In the best case scenario you'll never need to worry about your last known position as enemies will either be none the wiser or better still on the wrong end of your rifle scope. This entry in the series spends a lot of time making sure you not only have the tools to be that stealthy but also ensure that executing it is actually fun.

The eight lengthy missions consist of of open environments littered with objectives that you are free to tackle at your leisure, binoculars allow you to scout ahead and tag enemies while looking for potential paths and sniping spots. Padding round the large environments picking up collectibles and picking off isolated stragglers at a satisfyingly measured pace of play. For this general wet work you'll rely on your silenced pistol, effectively useless below the neck and with only two clips before you hit the dead man's click meaning you'll need to be both efficient and accurate.

Sloppy shots will quickly escalate your alert level and you either need to pull out your automatic weapon to deal with the threat and make your escape or hit the reload button and load one of your manually created saves which you can create at any point, a handy feature which allows you minimise the frustration of stealthing your way through long sections before being caught out in a moment of stupidity.

Your patience will pay off though, as you explore the environment you will come across perfect vantage points in sniper nests and discover generators which can be sabotaged to mask the sound of your rifle fire. Other loud events can also provide you with audible cover such as lighting strikes, passing air craft and AA guns.

Only after you have successfully found your position and created your cover while avoiding detection do you get your reward of a series of X-Ray kills, each slow motion sequence mapping the effect of your bullets on the human bone, muscular and circulatory systems in gory detail. It should be noted that the X-Ray camera can be disabled but most will relish their reward and see just how many testicle shots they can pull off. you'll need to be both efficient and accurate

Successfully executing such well thought out kills will earn you extra XP, with bonuses for shooting when "sound masked" or when you have empty lungs. Working your way through the XP ranks earns you access to a variety of weapons, equipment and customisation options. All these options can be saved in a several load out configurations so you can customise your hardware for the mission at hand. Taking for example a healthy selection of land mines and dynamite for a vehicle heavy encounter or anti personnel explosives for missions with infantry heavy deployments.

The length of the campaign is directly affected by your play style, head straight to the main objective with little regard for stealth and you can probably complete the single player in under 10 hours, a more methodical player taking in all the sights and tackling secondary objectives in a stealthy manner could easily add another 5 hours to that count. Optional challenges such as completing levels without being detected and killing targets in specific ways offer some incentive to replay missions. The sand box nature of the level design lends itself nicely to replaying a mission with a completely different strategy or on higher difficulty levels which can be customised to remove almost all of the HUD, game play assists and quick save ability for a more realistic experience.

These are all plausible and valid reasons for replaying the campaign which is just as well since the story and characters certainly are not. If ever there were a case for story and characters being little more than a vehicle for game play this is it. After playing for several hours I struggled even recall my characters name and the arty graphics that are presented before a level may as well be abbreviated to a loading bar and a note saying " In this level you shoot things".

In this level you shoot things The entire campaign can also be tackled in co-op with a friend, there are also some specific co-op modes with one offering the de-rigueur Survival mode where you defend against a horde of enemies and Overwatch which pairs you as the more traditional sniper and spotter team, with the sniper often confined to a high vantage point as the spotter moves round the level marking targets and completing objectives with only their pistol and noisy assault rifle for protection. It's a fun asymmetrical dynamic which requires good communication and forces you to work together as a team, ghosting through levels is even more satisfying with a companion.

Competitive multiplayer is less successful; there are some interesting ideas outside of the standard death match modes. No Cross prevents the teams from crossing over into enemy territory forcing you to scour the map for a long shots while in Distance King the longer the distance of the kill the more points you are awarded. Assuming an entire multiplayer mode based around sniping doesn't sound like your worst nightmare there is the potential for some unique multiplayer experiences here. The real problem is that as of this review the matchmaking system is still broken, I have only successfully begun one multiplayer match (which got disconnected halfway through) despite spending several evenings trying to connect to any of the available modes.

For any new shooter establishing and maintaining a multiplayer community is an incredibly hard task, games with better multiplayer modes than on display here have tried and failed. Even if the current issues with Sniper Elite 3 are resolved shortly they have long passed their window of opportunity for a moment in the sun let alone the chance of any longevity. The problems with multiplayer squander what could be an interesting take on multiplayer matches based around on long distance kills, and just like the single player story should; for all intents and purposes; be considered non-existent. It's easy to see where all the work went here, Sniper Elite III's core mechanics are solid, the X-Ray kills are definitely a gimmick; but turn out to be a fun one which is underpinned by some enjoyable stealth game play. The graphics show moments of promise especially the lighting which falls against the attractive backdrop of the rarely explored African front of World War 2. This makes for an enjoyable game which can be tackled at a measured pace and customisable difficulty eliminating almost all of the frustrating pitfalls that can come with the stealth genre. Add in the co-op campaign and extra co-op modes and you have a nice package which is a change of pace from your everyday third person shooter.