A car crash of a videogame 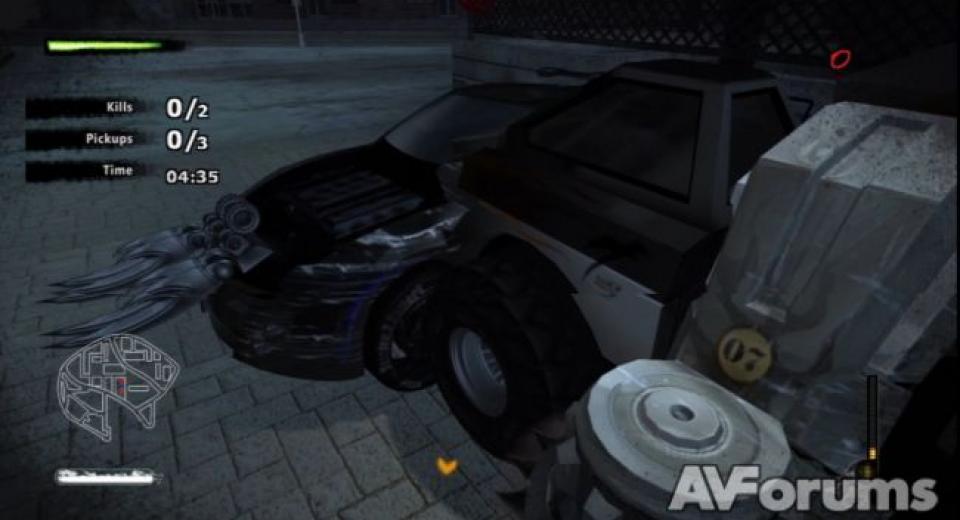 I’m not going to dance around the subject: Smash ‘N’ Survive is no good. It’s the worst game I’ve played in months, and without a doubt the worst game I’ve ever reviewed. There’s little more that I can do here than catalogue the ways in which this game fails to deliver on some admittedly solid ideas.
It’s particularly disheartening because vehicular combat is one of the few mainstream genres that isn’t oversaturated. There’s room here to do something new, but SNS isn’t a patch on the existing franchises (Destruction Derby, Twisted Metal, etc) and doesn’t stand on its own feet.
The first thing that will strike you about SNS is the metal guitar riff that plays on the shortest possible loop over the menu screen. It’s irritating after ten seconds, but you’ll be subjected to it for much longer than that as you struggle against a user interface that frequently refuses to acknowledge button presses. Still, if that gets on your nerves, fear not - the lengthy load times will give you ample opportunity for calm meditation.
The campaign offers a variety of game modes. Some require you to destroy other cars, while others require you to survive for a certain amount of time while cars try to destroy you. Then there’s escort missions, planting bomb missions, collecting missions, and straight up hit-all-the-checkpoints racing missions. SNS doesn’t stand up aesthetically or graphically. The ‘world’ is uninteresting, coloured predominantly by browns, greys and dark greens like a sparse and flat reimagining of Gears of Wars. The forty or so customisable cars are presumably supposed to get the testosterone pumping among petrol-heads, but most look more like failed Robot Wars contestants than aggressively-pimped rides.
Glitch-ridden visuals irritate and frustrate at every turn. Missing frames and screen tearing are commonplace. Unfathomable design decisions don’t help either: the slow motion zoom-in sequences that trigger when you collide with enemy vehicles must have been the idea of a disgruntled employee because they seem to serve the singular purpose of drawing the player’s attention to the game’s graphical weaknesses.
The artificial intelligence of the computer-controlled vehicles is non-existent. Enemy cars are driven by characters with a wonderful collection of silly names (Lucifer, Cartman, DareDude), and they don’t seem to have a virtual braincell between them. I could reel off any number of specific examples but it was first noticable to me in the second mission, which involves surviving for three minutes on a donut track while enemies try to ram your car. Here’s the thing: I stayed in one spot for nearly half that time without so much as seeing another vehicle. The radar revealed they were all on the opposite side of the track, apparently practising three point turns in a manner reminiscent of Austin Powers in a luggage cart.
The physics are of the worst order, which is to say they are unpredictable. Now I have no issues with deliberately unrealistic controls, but consistency is a must. In SNS you often have literally no idea what will happen next. Cars bounce off one another, fly high into the air or flip for no reason (only to disappear and respawn awkwardly a few seconds later) with no rhyme or reason. For added comedy, when you inevitably destroy your own vehicle as a result of it not doing what you wanted it to do, you’ll be greeted with the clearly unproofed notification that “YOU KILLED SELF!”.
If I'd played much more, I think I might have. Smash ‘N’ Survive is a vehicular combat game featuring a range of cars and game modes that, as a PSN release, should have been a fun distraction for fans of the genre. Unfortunately Version2 Games were unable to deliver anything like a quality package. Poor graphics, inconsistent physics and one of the most annoying audio tracks in video game history combine to form a wholly unrecommendable title.