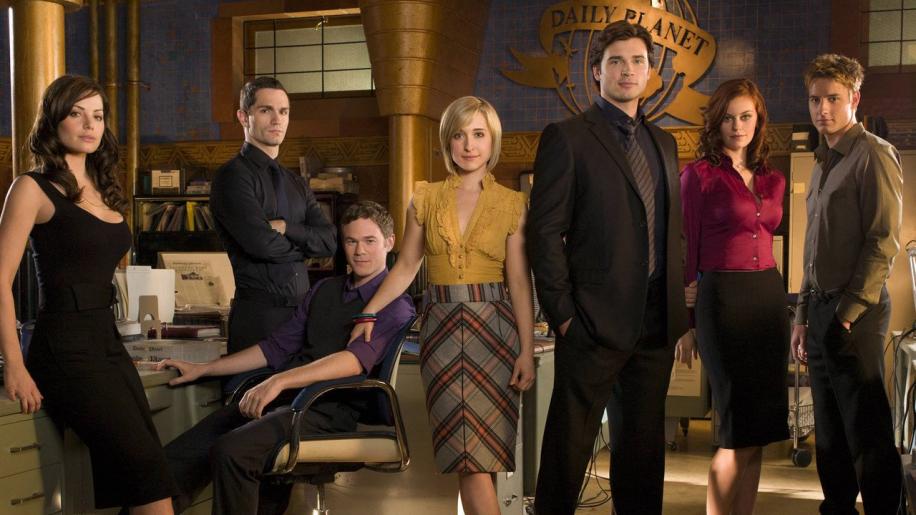 Smallville is presented in a very good 1.78:1 aspect ratio anamorphically enhanced widescreen transfer. The detail is fantastic, with clarity throughout, no grain and only a little noticeable edge enhancement - and this quality is maintained even during the darker scenes. The colour scheme is bright and luscious, the largely sunny Kansas setting offering mellow autumnal radiance, deep tree greens and soothing, tanned skin tones. The locations range from the brown-biased wooden farm environment to the more clinical confines of the Lexcorp Metropolis offices. Superman is one of the brightest, most colourful superheroes, so it is only right that a show about his youth should be just as colourful - full of reds and blues at every available opportunity. The transfer itself has no detectable print damage, as you would only expect from such a recent production. Unfortunately the sound treatment isn't quite as spectacular - for a show with such a boisterous, sing along title track and plenty of similarly engaging songs across the season, along with a bunch of 'super'-effects it is a shame that they have not upgraded to Dolby Digital 5.1. Instead all we get is your standard Dolby Surround Sound track, albeit a fairly enthusiastic one. The dialogue is always clear and coherent, the effects well-observed and commonplace (everything from doors shutting to footsteps as well as the more dramatic Superpower effects and explosive confrontations) but between these and the score, it is noticeable that they have to share such a limited array. Blasting music, dialogue and multiple effects out of the same frontal array simply cannot sound as all-encompassing as a six-speaker affair, so whilst the offering is good and thorough, its restrictions are apparent - more so in the bigger, more climactic scenes that in the smaller-scale moments. We get three audio commentaries on key episodes from the first half of the season, commencing with the premiere, Crusade, which sees input from executive producers Al Gough, Miles Millar and Ken Horton, along with actresses Erica Durance(Lois Lane) and Annette O'Toole(Martha Kent). They appear to have a good laugh, concentrating on the talking point - Lois's introduction - and of course the loose ends they had to tie up. It is an engaging, fun commentary, with the girls on top form and the guys more than prepared to interject the odd technical effects trivia into the mix to spice things up.

The sixth episode, Transference, has a commentary by the same three execs, along with actor John Glover - included here because the episode revolves around him and because the portrayal of his character takes several interesting turns. Glover discusses the changing faces of his role, whilst the execs talk about the story arc that is evolving throughout this episode and the series. Although not quite as fun as the first commentary, it is still a solid addition, especially with the welcome participation of John Glover.

The third and final commentary is on episode eight, Spell, the one which furthers the development of the Lana side to the ongoing story arc. It is will the Director Jeannot Szwarc, who is joined by the lovely ladies Kristin Kreuk (Lana), Allison Mack (Chloe) and Erica Durance (Lois). It should be a dream come true but unfortunately the presence of all three of them leads to a little too much 'Clueless' behaviour as the giggle their way through the commentary. The comments are largely throwaway and capricious and this is easily the least interesting of the three information tracks.

There are also twenty-one additional scenes, mostly extensions of scenes in the original episodes, but still totalling about thirty minutes of extra footage. Although not every episode has a deleted scene, this means that most of the more important episodes have more than one. Unfortunately - but only really to be expected - most of them are not that good. Most of the main characters are present and correct: Clark, Lois, Chloe and annoyingly Lana, but little of the footage here actually develops their characters any more, nor adds anything to the story - or to the action. There is one slightly interesting addition to Lionel's big prison sequence, along with a rather odd Lex flashback and more of the lovely Alicia but all-in-all they are not really worth getting excited about. It would have been nicer to see alternate versions to the effects sequences or different cuts to the bigger action scenes rather than surplus dialogue. Still, the studios' effort to make any additional footage available for a TV show is always worth commending.

There is a ten-minute featurette all about Being Lois Lane, where they look at the five major incarnations of Lois over the last few decades - Noel Neil (for the black and white TV series), Margot Kidder (for the films), Teri Hatcher (from the New Adventures of Superman TV series), Dana Delaney (for the Superman cartoons) and, most recently, Erica Durance. It is quite nice to hear about the different takes each actress had on the role, with Superman comic scribe Jeph Loeb popping up to talk about the Lois heritage, along with contributions from all of the various actresses apart from Teri Hatcher, as well as clips of relevant footage for all of them. This is a very watchable little featurette although I suspect that if they did the same for Lana, they would find Annette O'Toole's movie Lana far outweighs the limited range of Smallville's Kristin 'smile & cry' Kreuk.

Finally, there is a fifteen minute featurette entitled Behind Closed Doors - Inside The Writers' Room, which gives us plenty of interview input from the creative talents behind Smallville. They talk about the episode-to-episode content, the end of season ideas that they have to set up through the story arcs, the imaginative visions that have to be tailored down into budget-able ideas and the input they have from Jeph Loeb, who addresses the Superman lore aspects of the production. They talk about individual episode plots and we are given brief footage to relate the discussions too, but nothing to invasive or fluffy. It is a interesting featurette that rounds off a nice set of extra features.

For a limited number of customers there is also Bonus DVD included in the package, featuring an episode of the 1990 TV series, The Flash, starring John Wesley Shipp and Amanda Pays. It is not a very good episode and the show has generally dated quite badly (if it was ever regarded as good) but it is a welcome addition to this pack, for reasons which will become apparent when you watch the show. Smallville is an unmissable series for superhero fans that has been made accessible to a wider teen drama audience by a clever setting and a mixture of plots you can relate to and kick-ass effects. This fourth season is not the strongest that has come so far but is nevertheless quite engaging and does contain some vital and drastic developments that followers will be keen not to miss. The video presentation is excellent for a TV show but the audio is decidedly limited. However, there is a comprehensive inclusion of extras that will make this a compulsive purchase for fans. Newcomers should, as I've already suggested, seek out previous seasons first but avid Superman and Smallville viewers should pick this up right now.