The crafty raccoon is back in business 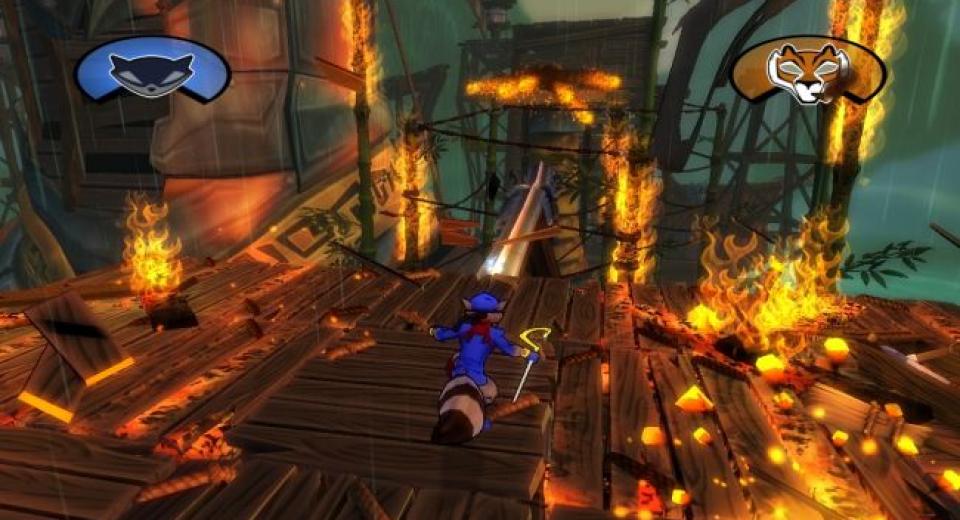 I think Sly raccoon should be the subject of a name change to something more suitable such as Shy raccoon. It's been somewhat of a long time since we last saw him make an appearance on the gaming scene and (excluding the HD remakes of course) we haven't seen anything from him on the PS3. Given the success seen in the past, this is quite surprising really as Sucker Punch delivered three arguably solid games to PS2 owners worldwide.

But patience is a virtue as they say and good things come to those who wait (Duke Nukem Forever owners will say different) and the game is in new hands with Sanzaru who worked on the HD bundle. But those who were originally captivated back in the day may have moved on and forgotten about the sneaky little pest so the pressure is on to appeal to a new audience and also test the waters on a new console.

As is the case with the majority of games these days, we're treated to a animated cutscene explaining where Sly has been these past few years. Fitting with his near-decade no show, he announces that he hung up his cowl in order to settle down for a while. Similarly his compadres also went their own way in order to fulfill their dreams and fill in the time they spent away from each other. But like any master criminal, it's not long before the itch comes back and Sly gets back on the old horse. This time round he is faced with a more imminent problem; pages of the Thievius Raccoonus are disappearing. It soon transpires, thanks to Bentley, that someone somewhere is messing with the time line for their own good. Not only are they capturing Sly's ancestors but they are also profiting from taking specific antiquities.

It just so happens that Bentley has been working on a time machine which fits perfectly into the team's van and soon you're jetting back through time in order to find those responsible. From Feudal Japan to medieval England you're treated to a select few locations that are well designed and full of character and sections to explore. For those who wish to steady the pace and take time to appreciate the vistas and scenery on offer you're in for a treat because visually this game really is quite good.

The Sly games have been known for their charming appearance and cartoon-style aesthetic which is ever present and a greater sight to behold on the PS3. High Definition really does the game a service as it shines and glistens at every turn and Sly has never looked so good. It won't win any awards for its level of detail or pushing the PS3 to its limits but what it does is enough to keep you coming back for more.

Each time period you travel back to acts as a hub giving you a choice of what to do in each as and when you please. Your first job, of course, is to complete your duties as Sly Cooper who has to flit about stealing keys, treasures and freeing his ancestors. Bentley and Murray can also play their part in heists and escapades by shutting down security systems and taking down foes who overpower and obstruct Sly. Enemies vary in size, appearance and threat whilst also fitting in with the environment in which you find them in. Take for instance the first section set in Japan which has Herons acting as archers skulking across rooftops whilst over-sized Samurais block specific sections which require stealth to get to.

These sections in question aren't always solved with Sly's normal abilities as he can don disguises in order to fool his adversaries and overcome blockages. He can waddle about in a Samurai outfit in order to pass a parade of similar suited enemies or wear a Robin Hood style suit which sees him shooting rope arrows around in order to go ariel. It adds a nice twist to the existing formula and one which mixes nicely with the present upgrade system.

Carrying on from previous titles, a lot of your time is spent collecting coins which are dotted across your path and those which spill out of a foes back pocket upon their defeat. Craftily you can also pickpocket in this title which allows you to pilfer some extra coinage from those who you do not wish to engage with or collect treasures or keys from them (which are sometimes needed for progression). A parachute is but one of many abilities and items which you can spend your collected coins on. Glass bottles spread far and wide and once they are all gathered allow you to unlock the master safe in each time period. There aren't really any issues when it comes to controlling the black and white pest as he is rather obedient with few obstructions to spoil the party. The camera is well placed and unobtrusive whilst climbing, hopping and combat are all undertaken with relative ease.

It's a charming game that's for sure when you take the graphics into consideration but that is added to with the gameplay and voice acting which borders on the annoying at times but stays just within tolerance. Bentley and Murray throw their 2p's worth in every five minutes with some humour but there's the odd occasion where their silence would be better appreciated. What's worse is the fact that the sections involving Sly have been scrimped on just to accommodate the un-dynamic duo. Fair enough they need to play a part in the game but it could stay at a behind-the-scenes level rather than making us play as them in order to strive for 100% completion. If their outings brought something interesting to the table then fair enough but often they don't.

One thing the game isn't is harsh or punishing as you can sometimes just use trial and error to complete upcoming sections with little to no challenge. Whether this is done in order to appeal to a new, younger audience I'm not sure but for those returning from the older games will likely find this addition to be a bit simple or dumbed down. What's worse however is the fact that Sly may have been away for too long and he may have missed a few tricks given how long it's taken for him to make a re-appearance. Sure, the staple ingredients are there but you can't help but feel the game is a bit average, a bit plain and altogether a bit 'meh'. Good looks and nostalgia aren't reason enough for gamers to spend their hard-earned cash anymore in these times I'm sorry to say Sanzaru.

Thieves in Time does come with a free download for Vita owners and cross-play compatibility allowing you to continue your adventures on the move and retrieve it again later on via the PS3. It's a nice idea but one that is under-appreciated and one that is not used anywhere near enough.

Thieves in Time doesn't really do anything wrong, in fact if you go by what it has done in the past it pretty much plays all its cards correctly. But, if you're after a new Sly or one who is showing clear progression in his old age, then you won't find it here sadly. It's a nice hark back to the original games but there's not enough substance or ambition which is needed to guarantee a purchase from loyal fans. Take heart knowing that this looks, feels and plays better than games of old but beyond that it's pretty much business as usual for the troublesome trio.