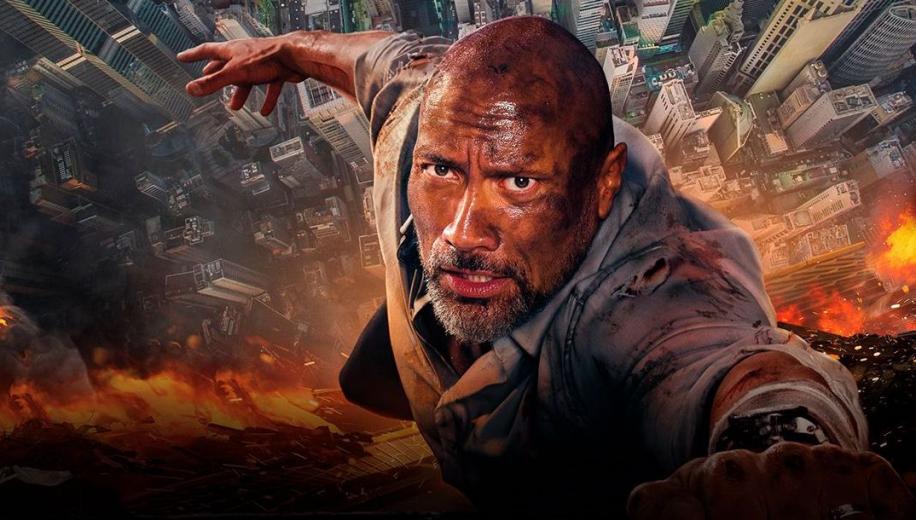 Dwayne Johnson is in full rescue mode as he goes semi-Die Hard to save his family trapped in a Towering Inferno.

Dwayne Johnson, the artist formerly known as The Rock, has enjoyed a particularly prolific - and largely extremely successful - output over the last few years, which arguably started when he took what was supposed to be a supporting role in the Fast and Furious franchise (but has since led to his own, much-anticipated, spin-off), enjoying previously rescuing his family from a disaster in San Andreas, and eventually churning out a seemingly unprecedented five blockbusters in little over a year - The Fate of the Furious, Baywatch, Jumanji: Welcome to the Jungle, Rampage and now Skyscraper.

With that kind of output, and only one real miss amidst that bunch, it's no surprise that he has risen to the rank of world's highest paid actor. If there's any downside to this kind of quantity of work, it's the quality, with Johnson almost consistently delivering entertaining action adventures, but actually only really sparking something memorable in his Jumanji film - and then only largely because he afforded it a welcomely self-depreciating edge. Skyscraper has him return to full earnest rescue mode, but largely plays it safe with regard to the distinguishing features that define both of the classic movies that it seeks to blend, neither affording the epic, ensemble disaster scale of The Towering Inferno, nor the more satisfying terrorist-neck-breaking bodycount of Die Hard, and perhaps also struggling on the stunt front, with Johnson more than happy to leap tall buildings with the help of superior CG, but his 'stuntwork' paling in comparison with the real stunts that Cruise delivered so recently in Mission: Impossible - Fallout.

The story has Johnson's security expert framed for a terrorist attack on the world's newest, tallest building, a high-tech monolith which is promptly set fire to and overrun by mercenaries. For Johnson, however, it's all about his family, and the big man goes to great lengths to get back in the blazing building to save his wife and kids.

Hardly an original affair - in fact they arguably should have tried just writing it up as a direct sequel to San Andreas to avoid so many comparisons to other, better films - Skyscraper still produces a thoroughly good night's entertainment, with a Cliffhanger-esque moment of tragedy for its hero during the opening prologue, and a pretty fast spin-up on the terrorist takeover, electing to have Johnson's hero outside of the action and having to get in so that he can save his family (and providing some of the early big stunts). From there on out, however, it's pure Die Hard, only with a very soft PG-13 edge, which is frequently dangerously close to just UK-PG, turning the camera away from every single killshot and robbing the film of any chance at a more visceral edge. Conversely, it has a very narrow scope of rescue, allowing for only so many permutations involving the three people in jeopardy (particularly once the terrorists set their eyes on his family).

There's nothing wrong with Skyscraper, it's relatively short and to the point, and Johnson is a charismatic lead - still a little stiff when playing it deadly straight, but certainly committed to the role - and the film does boast plenty of fiery high-rise setpieces that our hero has to grunt and sweat his way through, as well as a slightly inventive finale that playfully updates Bruce Lee's Enter the Dragon with modern tech. Throw in a few dozen more hostages that need rescuing, a few more failed attempts from the police and fire services at tackling the disaster, and a lot more deaths - preferably satisfying ones where nasty mercenaries get their comeuppance - as well as perhaps an even vaguely interesting villain, and this could have really been something which lived up to the films it was so clearly cloned from.

Although not a 'full fat' native 4K presentation - the higher resolution capture limited by a still very commonplace (if not standard) 2K Digital Intermediate - this 2018 production undoubtedly dazzles in 4K, the upscaled image benefiting from the other assets of the format, with the Dolby Vision enhancements marking the cherry on a very tall, building-shaped, cake.


An excellent presentation that shouldn't be dismissed just because it's technically an upscale.

Detail is excellent, rendering superb facial close-ups with no signs of softness, a welcome textured level of clarity to the lines and facial hair, and resounding clarity that extends beyond the fore in to middle and distance shots - indeed the stage-setting skyline vistas retain crystal clear precision across the CG-enhanced landscape. The colour scheme boasts some excellent fiery blooms, with intense oranges, yellows and reds, and a broad range of peak whites and deep, bottomless blacks.

Indeed, Skyscraper, notwithstanding its initial scene-setting, is an immensely dark movie, which is where not only HDR and WCG but in fact Dolby Vision, come into play, drawing out a fabulous level of shadow detail from the depths, to leave a clear image in spite of the low lighting conditions and near-darkness in many sequences. Overall it's an excellent video presentation that shouldn't be dismissed just because it's technically an upscale.

Universal's accompanying aural treatment comes with the added enhancement of 3D High Definition immersive audio in the form of a Dolby Atmos track, founded upon an already impressive, if not resoundingly demo Dolby TrueHD 7.1 core.

As much as the visuals take you to great heights and then throw you around with vertigo-inducing furore, the sound design goes some way towards placing you right in the thick of that same chaos, whipping wind around you, helicopter blades chopping through the air beside you, shattering glass and blasting out booms of flames in your face. Gunshots carry a nice weight to them, and indeed the majority of the effects come with added LFE undercurrent affording them a hefty backbone that is sure to further draw you into the high-rise hijinks.

The score is comparatively generic but still does the job, affording the surrounds more fuel for the fire, and rounding out an excellent track - complete with, in case you hadn't already guessed, clear and coherent dialogue predominantly across the frontal array - which is sure to make for welcome demo material.

A nice though far from extensive selection.

Universal's Skyscraper release kindly ports over all of its extras onto the 4K disc itself, and it's a nice, although far from extensive, selection headlined by an Audio Commentary from Writer/Director Rawson Marshall Thurber, a slew of six mini-Featurettes all lasting just a couple of minutes each, and some 22 minutes of Deleted and Extended Scenes which perhaps give you some idea how this could have been made into a more expected 2 hour runtime feature, despite the fact that the majority were probably wisely culled. Universal's UK release of Skyscraper on 4K Ultra HD Blu-ray affords the 2018 blockbuster excellent video - despite it's 'semi-skimmed' status as 'merely' an upgrade limited by a 2K DI, the Dolby Vision enhanced image is hard to fault and utterly demo worthy - and fabulous Atmos-enhanced audio, concluding with a nice little set of extra features which actually get ported over to the 4K disc itself.

Fans of The Towering Inferno and Die Hard, who are prepared to accept that this neither meets the standards of either of those classics, nor the expectations commensurate to a combination of the two, will likely find it a great release and another entertaining, if utterly derivative, addition to their burgeoning collection of thoroughly enjoyable, undeniably competent, but also hardly noteworthy, Dwayne 'The Rock' Johnson action adventures. It'll sit happily right next to San Andreas.