They're bigger, but are they better? 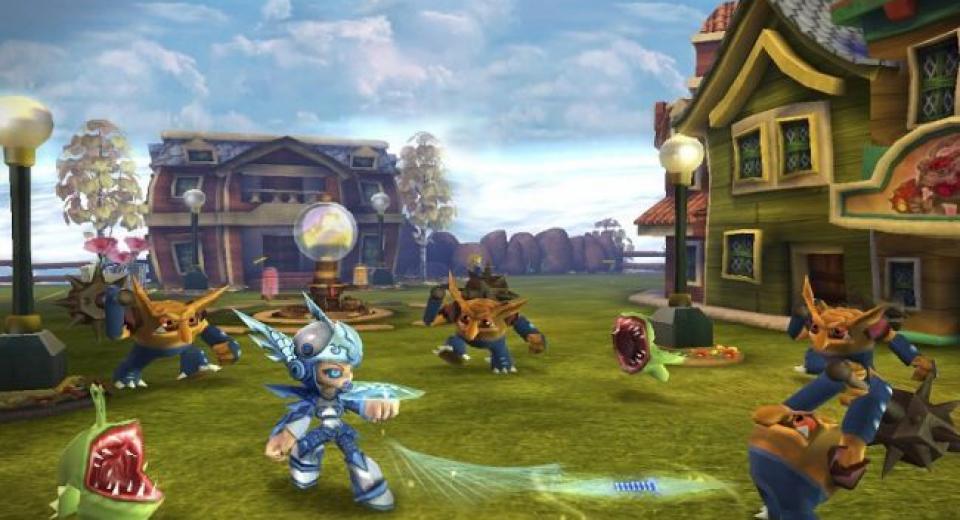 I am a thirty-two year old man who loves to play and write about video games. My favourite games this year are The Walking Dead, Spec Ops: The Line and Max Payne 3. All PEGI 18, you’ll notice.

I am a Skylanders expert. I know all the elements. I can tell you what each character’s one-liner is when you put them on the portal of power (and in the original they’re not even words, just noises like Dino-Rang’s “WALEEGANG!”). I even found myself humming the theme in the kitchen the other day, much to my own dismay.

My extensive knowledge is a result of having two young children. Without them (and were it not for this reviewing gig), I wouldn’t have given it a second look: Skylanders wasn’t made with me in mind. But my kids love it, and with good reason - it does what it does very well. The selling point of Skylanders is the interaction between the real world and the game world. The Skylander figurine placed on the Portal of Power becomes the controllable character on-screen. In my house, switching toys is my three year old’s job. The accompanying teleporting effect is enough to keep her happy, while my five year old busies herself with her primary concern of pummelling the A button.

The release of Skylanders: Giants is accompanied by a range of new toys, of course. There are eight Giants to collect, as well as eight 'Light Core' characters. The Giants have slightly enhanced abilities in-game -- for example, they are able to throw huge boulders and smash through weak earth. They glow pleasingly when placed on the portal, too. In addition, upgraded versions of the original cast are available (differentiated as 'Series 1' and 'Series 2').

Just as in the original, the game isn't shy about incentivising you to buy more of the toys. Each Skylander figure effectively represents an extra life in game. If they all die ("need to rest") during a chapter, you'll have to start the chapter again from the beginning. So the more you have, the easier it is. Then there are the side-quests that are blocked off to all except those Skylanders of a particular element (class). Finally, and most brazenly, there are the Soul Gems, which are collectables that provide an additional ability to a specific Skylander. If you don't own the figure, a slickly-edited advert for him/her is shown to tempt your children. Giants deviates so little from the original that you’d be hard pushed to tell one from the other. The story picks up more or less where the previous game left off. The villainous Kaos is on earth, but it doesn't take long for him to find his way back to Skylands. The meat of the plot centres around the Giants, the original Skylanders who were separated many years ago from their smaller comrades.

The RPG elements of the first game are maintained, cleverly enhanced by having characters’ progress stored in the toy rather than the console. Figures can be taken to friends’ houses, and used on any platform. Series 1 characters have had their level cap increased from 10 to 15 and although they don’t light up like their Series 2 counterparts, they are far from redundant.

Giants’ gameplay remains focussed on the beat-’em-up, treasure-collecting, puzzle-solving mechanics of the original. Controls are intuitively designed, so much so that my three-year old can manage early sections of the game without much fuss. It’s worth noting that on the Wii, minimal use is made of motion control.

The single-player campaign is shorter than the original, but better balanced. The original was guilty of the odd difficulty spike - notably some boss fights, and particularly Kaos at the end - but those issues seem to have been smoothed in Giants. The inclusion of adjustable difficulty levels helps, too.

There’s still a two player limit, and online is conspicuously absent - but this is a game meant for the front room, for families, so that’s no real loss. Adversarial multiplayer returns with some extra bells and whistles, but it’s still fundamentally the same player-vs-player button-bash-fest. It’s fun in bursts but neither my kids nor I found it held our attention for more than a few rounds. The main campaign is where the fun is really at. So is the whole thing just a cynical money-spinnner? Yes, to an extent, but no more so than the Transformers toys I amassed in the 80s. And just as they gave me years of pleasure, so Skylanders is giving my children pleasure. Depending on how many you’re willing to buy, it can be an expensive past-time, but if you can keep your kids' expectations in check then Giants can provide literally months of entertainment.

I’ll give the last words to my five year old daughter, who walked in on me halfway through writing this review. “What have you said about it, Dad?” she asked. “I hope you’ve said it’s good, because it is.”

So there you go. It's good.

Don't focus too much on the score, it’s a simplification of a complicated picture. The criticisms of the game are the concerns of an adult; Skylanders: Giant's young audience will invariably be blind to the cost of building a substantial collection, and the limited evolution of Giants over the original game. That said, the toys’ RPG elements send replay value through the roof, so even from your wallet’s perspective, there’s an argument that the value will justify the cost over time. It certainly doesn’t feel cheap or exploitative to play, and even I have to admit that I’ve thoroughly enjoyed joining in with my kids - which is lucky, because I won’t be seeing the back of it for a long, long time to come.