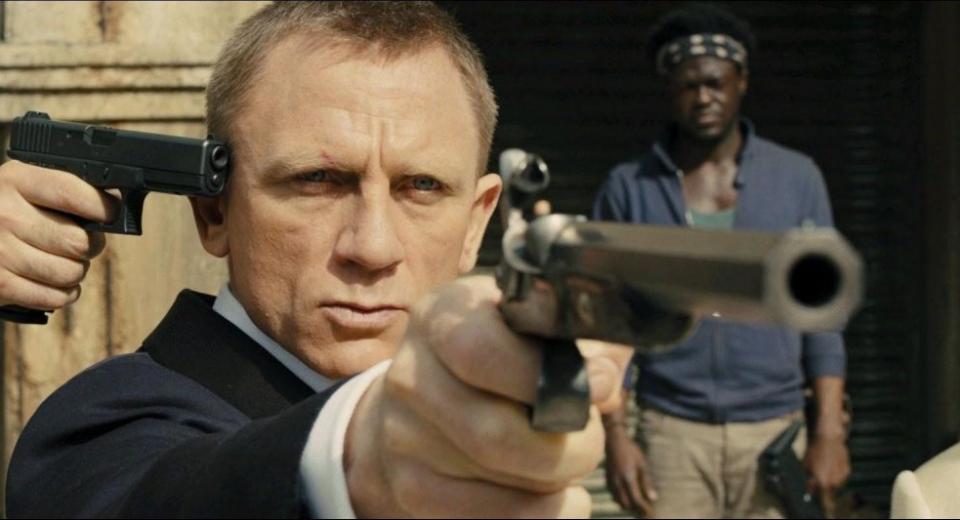 2013’s first undisputable demo-quality 2D disc, the UK Region Free Blu-ray release of Skyfall offers up a stunning reference standard video presentation which, alone, will likely make this a must-have purchase even for those who weren’t instant fans of the film.

Although shot with IMAX in mind for key sequences, here the film is presented in its constant non-IMAX theatrical aspect ratio of 2.4:1 widescreen. However it’s arguably the IMAX-designed cinematography by Roger Deakins which has had the biggest impact on the quality of this presentation. His spectacular work on Skyfall was so impressive that it allowed the movie to be shown in IMAX cinemas without any need for the standard upconversion that most non-IMAX-shot films undergo. Indeed his work is actually so good that the CG effects have a hard time keeping up with him; the largely excellent digital work still standing out when compared to his jaw-dropping filmwork.

Boasting exceptional depth and resounding clarity, even though it isn’t a native 3D film, there’s a wonderful 3D pop to the image which consistently impresses. The pin-sharp crystal clarity allows for fantastic detail on everything from the close-up shots through to the background settings, with excellent facial observation, clothing weaves and background textures, and outstanding fine object detail. All this without any signs of edge enhancement, unruly DNR application, banding, blocking or other digital defects. It’s simply a perfect image, from start to finish.

The colour scheme will further stun you, with a wonderfully broad and rich palette that boasts vivid and vibrant tones across the spectrum; from the neon and fluorescent-dominated Shanghai nights to the bleaker greens and wood browns of the Scottish highlands; from the cold stone greys of the streets of Central London to the gloomy shadowy depths of the London Underground. Black levels are strong and deep without even the slightest loss of shadow detail; without even a hint of crush.

One of the absolute best video presentations that I have ever come across. The accompanying DTS-HD 5.1 Master Audio track is every bit the equal to the reference standard video presentation, offering up an audio presentation that is demo quality through and through. Although punctuated by powerful, thunderous action set-pieces – with suitably rousing score to boot – the track wonderfully blends its more boisterous elements in with the rest, offering up a masterful aural accompaniment which is both immersive and precise.

Of course dialogue gets prominent presentation above the rest of the output, balanced well largely across the front and centre channels, and never less than clear and coherent, even amidst all the chaos. The chaos is what many fans came here for, however, and from the opening roof-and-train-top chase sequence through to the island shootout; from the underground explosions through to the final assault, there is plenty here to give your home sound system a thoroughly good workout.

Aside from creating a wonderful atmosphere which helps bring all these key sequences to life, the precision-crafted soundscape allows for some fantastic effects: the echo of gunshots; the crashing of the ocean waves; or the downpour of London rain, with excellent directionality allowing helicopters to hover around the rooftop of your house and tube trains to punch right through your living room wall. The LFE channel brings as much depth and vitality to these sequences as it does bring punch to the action sequences. I’m sure that there will be one or two that will still struggle to avoid reaching for that remote control during the key set-pieces, but I didn’t find that any issue – it was wonderfully well balanced in that regard.

The stunning score by composer Thomas Newman only further enhances the piece, both paying its sincerest respects to all those classic Bond motifs whilst blending in some wonderful new elements. It gets superior treatment across the surrounds too, and keeps this soundfield immersive, atmospheric and all-encompassing throughout.

All in all, this is a superb aural accompaniment which is wonderful demo material. Matching up to its US counterpart, the UK release of Skyfall comes packed to the brim with extra features, boasting not one but two Commentaries as well as an hour-long multi-part Documentary and some promotional material too. I wouldn’t expect a Special Edition anytime soon, this is pretty special as it is.

Commentary with Director Sam Mendes is the better of the two tracks, allowing us some decent insight into the production, right from Mendes’s involvement at a script rewrite level all the way through to the production shoot and editing process. To make it more interesting, he always relates his comments to the on-screen events, allowing us background information into how key sequences were shot; the contributions from the cast; and the hefty effects that were required for some of the stunts. Aside from being a superior production commentary, Mendes also gives budding filmmakers some ideas about how to stage their own dramatic moments. Well worth listening to; a thoroughly enjoyable track.

Commentary with Producers Barbara Broccoli and Michael G. Wilson and Production Designer Dennis Gassner is far less satisfying. It’s quite a slow, meandering mess, which, whilst arguably more laid-back than the more information-packed Director’s track, takes the relaxed attitude to the extreme and threatens to bore you as a result. Theoretically it would have been nice to have a track provided by Broccoli and Wilson, given that they’ve been with the franchise so damn long (certainly Wilson is no stranger to his own Commentaries for the Bond 50 release) but they just don’t seem as interested in this particular film, and it’s actually Gassner who has far more to say. With many of the comments merely reflecting the on-screen action, it’s also almost as if the two Bond ‘experts’ were discovering it for the first time in its finished form.

Shooting Bond is a 14-part HD Documentary which can be watched in segments (all but one running from 90 seconds to 6 minutes in length, with the exception being a quarter-hour dedication to the epic climax) or as an hour-long whole. Culled largely from footage recorded throughout the production shoot, this really does offer everything you could possibly want to know about the film, utilising the usual format of cast and crew interviews and background footage, but presenting them in a far less manufactured ‘EPK’ style. The individual sections are: Intro; Opening Sequence; The Title Sequence; 007; Q; DB5; Women; Villains; Action; Locations; Music; End Sequence; M; The Future. If you are interested, I strongly recommend sitting through this from start to finish, it’s well worth your time.

Skyfall Premiere gives us a 4-minute HD look at the world premiere of the movie, presented at the Royal Albert Hall, with all the main players along for the ride.

Theatrical Trailer rounds out the disc with an HD presentation of the two-and-a-half-minute Trailer (although there are also some skippable Preview trailers for the likes of Taken 2 and A Good Day to Die Hard which play on disc start-up).

There is also a separate DVD and Digital Copy disc. A contender for the best Bond film in over three decades, Skyfall is a magnificent conclusion to what could easily be described as Daniel Craig's Bond reboot trilogy. If you expected a classic Bond movie, then you may find yourself slightly disappointed - we aren't quite there yet - Skyfall is the final chapter required to fully establish the Bond of old. But what a glorious chapter it is, boasting excellent performances, standout stunts and action sequences, and a great story which allows for some wonderful character development. Through Craig's three movies, we have at last been given some true depth and insight into the legendary icon that was created some 60 years ago and immortalised on screen half a Century ago. By providing us with this depth, Craig has arguably also catapulted himself into pole position to be classed as the definitive Bond. Outstanding.

On Region Free UK Blu-ray MGM really have gone the extra mile, giving us arguably the new benchmark demo disc in terms of video and maybe even audio presentations; easily matching up to the US counterpart. Certainly this looks reference quality through and through; expect to see it playing in showrooms (and living rooms) across the country just to show off TV sets. The accompanying extras are also pretty satisfying, with a couple of Commentaries and a weighty multi-part Production Documentary. Honestly, if you enjoyed the film, this is an absolute must-have purchase. And if you haven't seen it but are even vaguely interested then you could do a hell of a lot worse than just blind buying it. Highly recommended for everybody's film collection.