Sky Captain And The World Of Tomorrow DVD Review 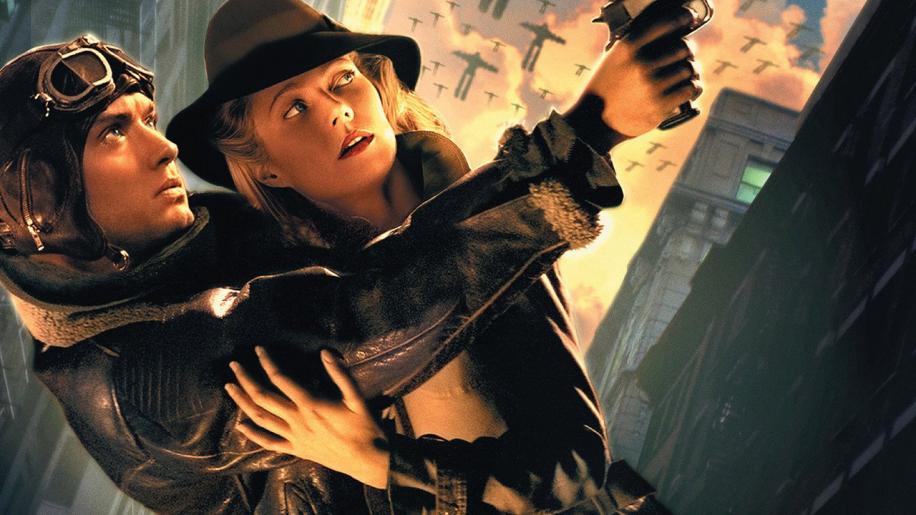 Sky Captain And The World Of Tomorrow DVD (2013)

This 1.85:1 video transfer is one that's rather difficult to assess. The whole movie is injected with a sepia overlay that serves to bleach colours and blur edges. Given that this is a critical contribution to the style of the movie, it's hardly fair to criticise it on this point. What this does mean, however, is that edge enhancement is - thankfully - nowhere to be seen.

Blacks feature heavily, and despite the blurry halo overlay, the blacks look solid enough and retain plenty of detail; colours too, whilst never looking realistic, look authentic in the context of the movie.

Detail levels are reasonable, and the whole print has a sheen of newness about it - no scratches, and little in the way of compression issues. And taken as a whole, you can't really ask for much more can you? If there's one thing to get excited about with this movie, it's the soundtrack. Featuring a blistering Dolby Digital 5.1 offering, recorded at the standard 448kbps rate, this is one multi-channel mix to scares the kids, the pets and anyone within a rather large radius of your listening room.

One word springs to mind when describing this soundmix: B-A-S-S. It's deep, it's throttling, it'll have your windows, the sofa and if not those then the subwoofer itself rattling. Because at close to reference levels, only the highest calibre of subwoofer will be able to cope with the plummeting bass lines that this soundtrack manages to pound out. The LFE channel really is ferocious, featuring liberal usage of the lowest octaves - including regular, extended drops to around and below the 20hz mark - and without a doubt if you've not calibrated your surround system and have the LFE channel running a touch “hot”, the bass may seem a little overpowering.

But the goodness doesn't end there. The whole soundstage of one of dynamics and crisp steering. Panning is sharp, with crisp dialogue and a real sense of depth to proceedings, and the surround channels roar into life throughout, laden with ambient effects as bullets fly, robots and planes shoot overhead and explosions test the strength of your window panes. It's solid, it's engaging, it's worthy of keeping close at hand for when you want to show off your system to your mates. Nuff said!. First up are two audio commentaries, one with the producer Jon Avnet (which frankly sent me to sleep, despite containing a lot of interesting info, the delivery left me numb) and the other with Writer/Director Kerry Conran and the VFX crew. Again there's the usual information that anyone curious about how the movie was shot will be interested in, and the delivery is a little better.

Next up is a substantial 2 part documentary, each part being 30 minutes in duration, and this takes the viewer through the movie from conception to the final presentation that we see on the screen. Included are cast interviews, many blue-screen shots and the cast and crew's thoughts about the project; all in all rather interesting if you're at all curious about a movie with real actors but no real sets, and certainly if you have a love of those old cliffhanger serials.
Next up is a short 8 minute featurette regarding the art behind the movie, showing concept boards and some of the inspiration behind the “feel” of Sky Captain, and following this is the “Original Six Minute Short”, which basically shows the first few minutes of the movie compressed into 6 minutes and shot very much in the cliffhanger serials style - this is presented in Dolby 2.0 (192kbps) and anamorphic widescreen, framed at 1.85:1.

Also included are 2 deleted scenes, neither of them remarkable but the second being curious as it's presented in a very raw state with blue screens and crude computer graphics. Wrapping up the package are some deleted scenes which are only notable for Gwyneth Paltrow complaining about someone farting in the fighter plane mock-up. Amusing, but hardly essential viewing.

Overall this extras package is of reasonable quality; the audio commentaries will likely only appeal to a few people, but the 2 part documentary is certainly worth a watch. No doubt this is a movie to polarise opinion - you'll either love it or hate it. But if you fall into the former category, be prepared for an audio and visual ride. Buckle up, because you'll need to be strapped into your sofa when the audio onslaught begins...