This retro themed offering from Skullcandy has some unusual qualities 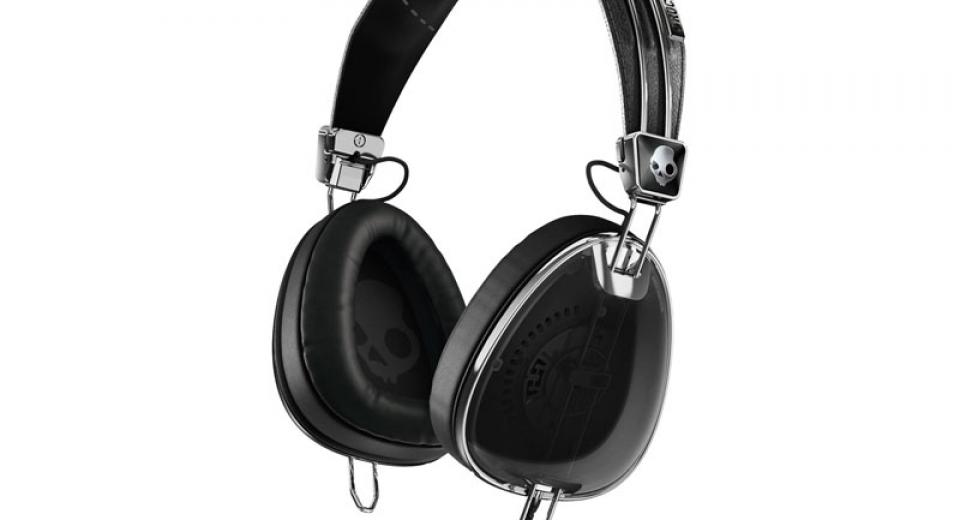 Skullcandy hail from Utah and is approaching its tenth anniversary in business. The brand focuses on the “Outdoor sports” demographic of surfin’, skatin’and basejumpin’ adrenalin junkies. The Aviator is part of the over ear range and partners distinctive styling with sonic involvement from the Roc Nation artist group that includes Jay-Z. Who knew that these legends of rap would be such capable headphone engineers?

The Aviator is the most “styled” of the headphones here. The design apes the look of an aircraft radio headset and allows you to act out any latent Memphis Belle fantasies you might still harbour. In addition to the overall styling, there is plenty of chrome detailing and the Skullcandy logo picked out in chrome as well. Even finished in black (white and brown are also available), these are a fairly conspicuous pair of headphones. As someone born into middle age, they are a bit sudden but they attracted plenty of positive comments.

The Aviator is designed with mobile use in mind. Like the Beats by Dr. Dre, they have an inline remote and microphone on the cord that will control your iDevice. The microphone is placed slightly too high on the cord to be truly comfortable and doesn’t feel as well made as the rest of the headphones but the remote works well enough. The cord is permanently secured at the headphone end which technically makes it more vulnerable than the Solo HD but at no disadvantage to the other headphones in the test. The cord itself is a pretty good length for portable and laptop use being long enough to allow some freedom of movement without requiring you to stow it with a wire tie.

The build of the Aviator is pretty good. The headband is substantial and the headphone pads are of a good quality. The only area that is less than ideal is the visible cable run from the earpiece to the headband. I am certain this has been done for style reasons but leaves this part of the headphone vulnerable- especially when you are trying to fit them into the bag. The good news is that the Aviator is extremely comfortable. The deep padding handles the sprung resistance of the headband well so that the Aviator stays attached to your head without feeling like it is digging in. The weight is well distributed and despite the lack of lateral pivot, these are comfortable headphones.

Of all of the headphones in the test, the Aviator is the one that most subverted expectations. I had assumed that the sonic balance of the Skullcandy would likely feature slightly overemphasised bass to make them more effective on the move but this isn’t the case. Instead they seem to have a reasonably flat frequency response with a slight but noticeable lift to the upper midrange. The result is somewhat unexpected but very likeable.

This lift means that the Aviator sounds rich and involving with voices and instruments. The effect is not unlike the effect that some valve amps can have. It isn’t absolutely accurate- and my wife noted that they weren’t really suitable for use with Ableton and Kontakt- but it is very easy to listen to for long periods. This does have the slightly curious side effect that a product aimed at the outdoor sports demographic sounds really very good indeed with acoustic and jazz material. I’m a little adrift on what the music choice of this particular demographic is but I’m not aware that this is it.

Bass is not as deep as some of the other designs here but it is fast, clean and detailed. It is interesting that the reviews on the Skullcandy website are largely positive but often has owners looking for more bass suggesting that the Aviator doesn’t sound quite they way that some owners expect them to either. There is sufficient speed to proceedings that the Aviator times nicely and sounds controlled and well defined with up-tempo material. It isn’t quite as adept as the Audio Technica but it is still engaging to listen to.

The voicing of the Aviator is fairly forgiving of compressed material and they sound perfectly good with 256kpbs MP3 or Spotify. Services like iPlayer and internet radio are also well presented. Lossless material improves performance a little, as does using an external headphone amplifier but- as might be expected; the Aviator will release most of its performance from a mobile device. Call quality via the cord mic is perfectly acceptable as is the quality of the call through the earpad.

The Aviator is relatively sensitive and goes pretty loud from a fairly small amount of input so they will give you all but the most ballistic volume levels from most portable devices. They offer reasonable noise isolation but can’t get close to the Beyerdynamic for sealing you from the outside world. In a very noisy environment, they will struggle a little but they would be up to the job of commuting.

I was a little surprised by the Aviator. This is a headphone that sounds rather different to the way it looks. Those looks won’t appeal to everybody but kudos to Skullcandy for trying something a little different. The fit and finish is also pretty good and they are pleasant to wear for long periods. If you are looking for a well thought out portable headphone that has a pleasantly warm and involving sound, the Aviator is well worth considering.