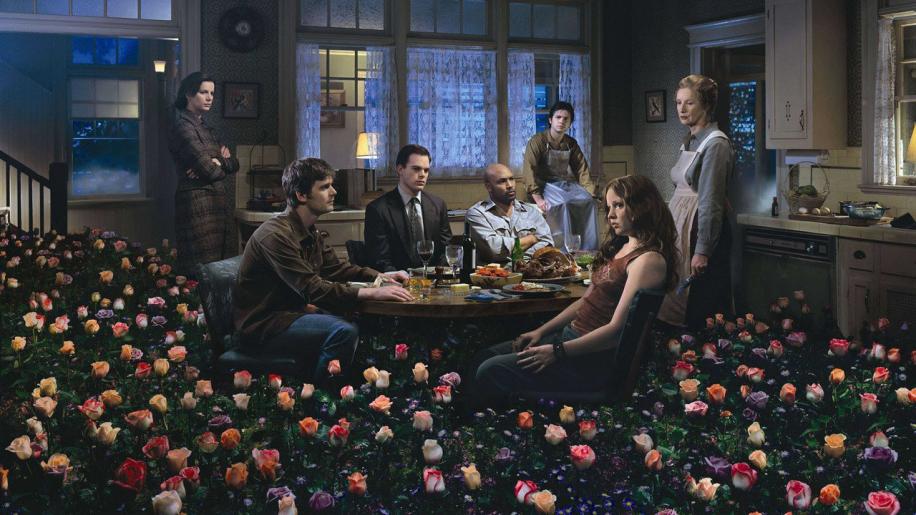 Warner has provided the show with a 16:9 aspect anamorphically enhanced for widescreen TV's with an average bitrate of 7.97 Mbps. It has taken a little research to uncover if the set is actually anamorphic as it does not say as much on the packaging; however, most retailers, as well as the few reviews already out there all write that it is anamorphic; it does look like it. The picture itself is uniformly excellent, superb detail and crisp outlines. The series is shot with a dark pallet, emphasising the atmosphere prevalent throughout the show, but all colours are represented faithfully on the disc. Skin tones still appear natural even among the deep blues and greens. The contrast and brightness for the most part was spot on, however, I did notice a few scenes where the blacks tended towards the grey.

Digitally there were no compression problems, no doubt helped by the magnificent average bitrate, but I did notice a little edge enhancement occasionally. Film grain was non existent, even in the bright blue sky of the daytime, with the only print damage being confined to the opening credits and never within the body of the program. Since each episode is like a film unto itself it is great to see such attention to detail throughout the entire season. The discs have been given an English Dolby digital 5.1 track and three 2.0 Dolby digital surround additions, English, French and Spanish. The show doesn't really lend itself to a fully immersive surround experience, it is very dialogue heavy and as such it is the front three that take the brunt of the work load. Even so, when called on to work the rears do make a decent enough noise. Of note the opening 'death' on episode one contains some excellent effects, the best of the season in fact, mirroring the acid induced feel of the scene. Other areas are normally confined to a little ambiance, weather, grief stricken cries etc but more often than not it is the score that takes the most work. So while there maybe little surround, the sound itself is quite excellent, there is a full range present giving a depth and feeling to the sound stage, always perfectly crisp and clear with excellent definition. This seems to be the norm with most of the HBO shows I've witnessed on DVD, clear with full range and depth, but little actual surround.

The three 2.0 surround tracks are essentially the same, save the dubbing. Sounding thinner and flatter than the 5.1, they too are almost all confined to the front, perhaps the rears came into play once or twice per episode, to be honest I expected this. All are a decent enough range, clear and precise, if a little on the quiet side. The season three recap is a two minute piece that is a rather disjoined story, didn't help me that much, most of my information came from watching the show itself and fans would already know anyway. Bit of a mystery for its inclusion then. Also each episode menu has a 'previously' or 'next on' option that show's a trailer for the appropriate episode.

The main extras are the commentaries on seven of the episodes which are Falling Into Place writer Craig Wright, Parallel Play director Jeremy Podeswa, That's My Dog director Alan Poul, Terror Starts at Home writer Kate Robin, The Dare director Peter Webber, Bomb Shelter writer Scott Buck and Untitled director/creator Alan Ball. Each is a reasonable listen in their own way, however, all are rather dry. The writers tend to speak of their role and keeping continuity as well as introducing their story, while the directors speak of a more technical stand point. The best one is the season finale with the creator of the series, he does speak at length about the show which is obviously dear to his heart. I think I would have preferred him as a mediator on all of the commentaries, would have made for far more engaging talks rather than the patchy monologues we have ended up with.

Next up there is an (exclusive) interview by Bob Costas with the main cast, specifically Peter Krause, Frances Conroy, Michael C. Hall and Lauren Ambrose. It runs for about fifteen minutes and is quite astonishing to see these characters laugh, or be out of character. They discuss the impact of the show before moving into more the spiritual realms of the afterlife and near death experiences!

Next up is Cut By Cut: Editing Six Feet Under featurette which concentrates on the episode Parallel Play. There are interviews with the creator, director and writer as well as the editor as they discuss the editing console. This is a fine little extra with many interesting facts. Amazingly, most people don't realise the power of the editor, the ability to change a complete story at this stage is unparalleled (Brazil anyone?). This featurette does not go into such detail but is still very insightful and interesting. Shame there are not more features like this in the set.

There are three deleted scenes all from the episode Can I come up now, although there is no official explanation for their excise it is easy to see why, for fans only really.

Finally the ad for the new soundtrack CD has a playable remix of the theme tune. Six Feet Under is full on emotional turmoil, with believable characters being able to convince, even the more outlandish plot developments. Powerful, engaging and irresistible, like looking at a crash, it's devastating, but you just can't turn away. As a DVD, Warner has produced an excellent quality set. Plush packaging with decent photographs to accompany the disc inside, the quality of the picture too is quite excellent. A few more extras, would have made this set outstanding, as it is, it is just excellent.