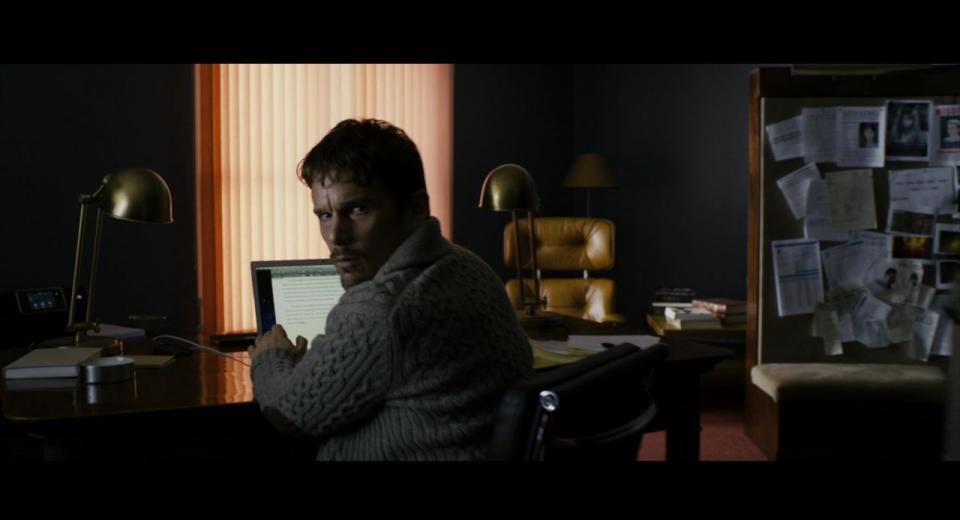 Sickly yellow and mouldering brown with a hint of mildew-green are the overriding colour-scheme for Sinister, striking up a perfectly accurate and moody depiction of crackly, blurred old 8mm home video footage, sweaty shadows and flickering projection-light. Momentum's 2.40:1 image and AVC encode do the image proud with deep blacks that suffuse the picture with intensely creepy swathes of potential nastiness, and high levels of detail when the gloom parts to reveal objectivity, humanity and, inevitably, base depravity in the spectrally wan light bestowed. In truth, the film, which was shot digitally, is prone to submerging some of its finer elements within the shadows but, as I've said a great many times now, I am quite partial to darker imagery so any such loss of subdued detail I did not keenly feel as being detrimental to an image that fully ensures the sense of dastardly darkness and dread that the makers intended all along. For example when the lights go out on Ellison as he works at his laptop, the only illumination is gained from his screen, the frame becoming as convincingly dark as anything that Peter Hyams would come up with. As such, I doubt very much that peripheral information would be all that apparent.

With the terrifically composed and nicely sinuous photography from Christopher Norr, there is little sense of flatness to the digital capture of the Oswalts' haunted abode, as fine delineation in the contrast enables characters and barely-lit glimpses in even the most Stygian of backgrounds a bit of dimensionality. Especially when things down the hall behind him seem to appear and then disappear over his shoulder. At first glance, this might not the most highly detailed of pictures, being all rather drab and gloomy, but then, when you look a bit closer, you will find that it is actually highly revealing indeed. The lines are sharply rendered on the floorboards, the tiles in the kitchen and the hall, the bric-a-brac is well presented and furniture is still fairly cleanly revealed even in the lower light conditions. Facial details are good, from the scratchy tufts of Hawke's spindly goatee-beard and the pores in his skin, to the reflections in spectacle lenses and the eyes, themselves. Then there is the serrated edge of a gleaming blade, and the coarse woollen weave on Ellison's cardigan, the crisp piping and insignia on the Sheriff and Deputy So-and-So, and the sharpness of his notes on the white-board and on writing pads. Even the curling wisps of cigarette smoke that the increasingly anxious writer wafts about him as he sits in a Skype chat have a profound realism and innate clarity. So when the darkness abates, there is no denying the tight visual acuity on display.

And when colour does suddenly appear – in the brightness of the daytime shots, say, or as evidenced by the vivid yellow of the patches on the police uniforms – it is warm and authentic. But this is definitely a film that favours the darkness a whole lot more.

On the transfer-front, I didn't notice any banding or edge enhancement. Aliasing was absolutely minimal and noise reduction was definitely not an issue.

All in all, this disc presents us with a fine and redoubtable image, and it earns itself an impressive 9 out of 10. The US release of Sinister boasted a 7.1 DTS-HD MA audio track, but in Blighty we have to make do with just a 5.1 mix. Yet, in truth, I don't believe that we are missing out on much, for this track still delivers amply spooked-up bangs and crashes, and rasply detailed scrapes and jolts that emanate from a fully-immersive environment that, although active all around, still manages to come across as authentically and clammily claustrophobic.

Christopher Young's insidious score moves with clarity and skeletal finesse, his unorthodox approach, queer instrumentation and sly mixing gaining fine separation and distinction. Drones and pulses gain strength and the industrial gasping swells with ominous intent, creeping in around you. The stereo spread across the front copes well with the occasional sweep-by of his unsettling effects. The multitude of stingers all come kitted-out with alarming depths of bass to lend weight to each and every accompanying spinal jolt. The sub very definitely gets in on the act, although some of the impacts in the dead of night would be enough to wake the dead, they still don't seem to rouse Ellison's family from their slumber. Sudden creaks and groans and thuds are delivered with a good degree of directionality and placement. Something scampering in the attic above Ellison's head, for example, carries a fine sense of height, and alarming bolts from the shadows possess finely acquitted steerage. A “sinister” crunching wallop floods in from the left, startling us at least as much as it does the prowling Ellison, and the track has a number of such elements to dole out. Which it does with consistent bravura. Subtleties, such as the clicking of a keyboard or the squeaking of door-hinges or the numerous whirrings and clickings of the projector, are also perfectly well balanced.

Rear support further enhances the experience with some jarring effects flung out behind you, frequently catching the skittering movement that is traversing the soundscape, or helping to bolster the foreboding score, but often coursing with its own infernal details.

Dialogue is natural and never lost or swallowed in the mix. There are some quiet exchanges but the words are always clearly discernible.

This is an intelligent sound design that benefits from a faithful home mix. The lulls are appreciably deceptive and the shocks are reinforced with sometimes stunning vigour. Another very strong 9 out of 10. Momentum put some interesting-sounding extras on the disc, although the UK misses out on the deleted scenes that the US disc contained. Few of the extras, however, are actually worth your time and effort.

First off, the film carries two Commentary Tracks that are well worth listening to. The first is from Derrickson, whilst on the second, he is joined by his co-writer C. Robert Cargill. Both offer honest and frank and quite illuminating thoughts on the process of getting a film written and made and are buoyed by anecdote, insight and opinion.

Sadly, the rest of the material is pretty woeful.

True Crime Authors could have been intriguing, dealing as it does with several writers who specialise in the same type of field as Ellison Oswalt. But I found them all to be irritating and self-aggrandising, and pretty much all I learned from them was forgotten in the very next instance. However, there is true imagery of the infamous Black Dhalia murder, which is certainly very arresting.

Fear Experiment was utter tripe, folks. Absolute old tosh that puts some pathetic, lame-ass and barely disguised promo together for the film by having a group of “audience members” rigged-up with heart monitors whilst they watch – yep – Sinister. We see snippets of their night-vision reactions and then bare witness to the “test results”. Get out.

By far the best of these little infantile featurettes that I discovered was a little documentary entitled Living in a House of Death. Now I will admit that I enjoyed this. Commencing with the grisly story of a true life house of horror, in which an entire family and guests were murdered by a mystery killer who bludgeoned them all to death with the blunt edge of an axe. With no culprit brought to justice, the house, which stands in a beautiful and picturesque hamlet in Villisca, South West Iowa, has a very dubious reputation as being haunted. The doc allows us to meet the man who looks after the place, keeping it preserved as it was when the murders took place. He takes us on a tour of the structure and details the killings, room by room, as well as the numerous spooky happenings that have plagued it since, informing us of the challenge that people set themselves to be able to spend an entire night in the house – something that nobody has yet managed to do without, ahem, giving up the ghost and fleeing in terror. We even get to meet some girls who attempted to do just that before scampering somewhere far more welcoming. There is a really unsettling atmosphere generated just from watching the feature, let alone setting foot in the place, and even though we can easily claim that it may have been done merely for the camera, a door swings shut under the command of an unseen hand and causes some shivery responses. Personally, I love this sort of thing and would relish the opportunity to stay over. Embellished for the cameras or not, this actually did make my blood run cold. Although it dabbles with themes of home invasion, massacred families, child abduction, snuff footage, demonic ritual sacrifice and morbid obsession, Sinister is still pretty lightweight stuff. Even Ellison's intense quest is diluted with the likeable side-kick antics of Deputy So-and-So, whose coveting of Cavet Cove-style investigation tempers the anxieties a good deal. But, having said this, the shock sequences are suitably and malevolently engineered to often tremendous effect. It takes a lot for a horror film to make me jump these days, but this one actually did it. Thus, I doff my cap to what is sure to become Sinister's most memorable heart-lurcher.

I talked a little bit about the ingredients of these more teen-targeted chillers, and this movie is certainly one of those that appeals to younger audiences who will view it as a challenging stepping-stone to harder, more intense material. But, for those well-versed in the mechanics of the macabre, Cargill's and Derrickson's nightmare outing will sink swiftly from memory. It is, however, a darkly entertaining slice of spooky shenanigans that is sweaty with difficult and disturbing themes, although the creation of a new bogeyman is, ultimately, all rather hackneyed.

Momentum deliver the goods with a great AV transfer that maximises the minimal light and intense, all-pervasive shadows to suitably skin-crawling levels, and ramps-up the shock quotient with a highly charged DTS-HD MA track that stretches around and behind you and rattles the pots and pans in the deep dark of you mind. Extras-wise, there is fluff and there are flakes, but two solid chat tracks go deep into the filmmaking process and a nifty little featurette on a real house of death arguably summons-up more chills than the film in-question.

Sinister certainly lives up to its name, and comes recommended for those seeking a moderately threatening chill-ride.