Those dreams of being a rockstar can come true... 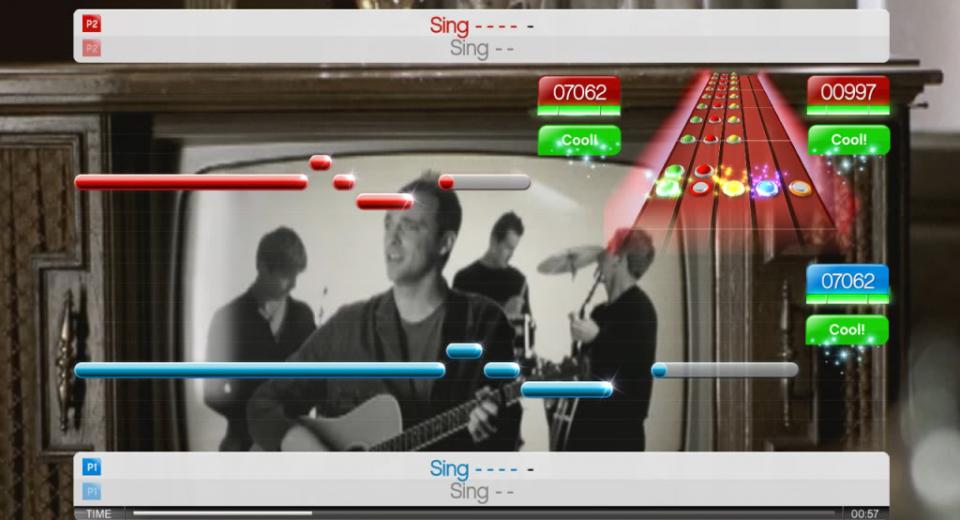 When it comes to party videogames, SingStar definitely stands out as one of the best titles you can bank on to spice up a dying get together; it’s the king/queen of the singing genre. There have been many who have tried to copy its winning formula across all formats, which are not as successful by a long shot, such as Lips on 360 and U-sing on Wii. In order to hold onto their dominance, Sony have kept publishing SingStar titles periodically, with two or three seen in the year, all of which appeal to a different and specific audience. This could be the beginning of a potential downfall for Sony though as they could over saturate the market with titles that could be released as Downloadable Content (DLC), leaving a bitter taste in the mouths of the consumer who keep paying out for new titles.

This iteration though, SingStar: Guitar, is clearly tapping into the recent resurgence of interest in the rock music genre and attempting to compete with games such as Guitar Hero (GH). In fairness, it would beat GH hands down when it comes to the singing mechanic, but apart from GH and Rock Band, there aren’t too many developers who can match Activision’s and Electronic Arts’ solid guitar mechanic. But London Studio won’t want to make this section too serious or ‘hardcore’ as not to alienate their potential audience as SingStar is first and foremost a party game, with the intention of having fun.

It’s hard to rate a game on its presentation when in reality, the majority of the game plays out by viewing an artist’s music video, and the lyrics across the screen. In this respect, lyrics and menus, this version of SingStar is identical to those that have preceded it over the past few years. This is not a bad thing though as it’s a case of, “If it aint broke, don’t fix it” as the overall navigation of menus is very simplistic and effective.

After an initial user-friendly setup, you scroll through songs horizontally and then choose what length song to sing to and what artist you wish to mimic in some instances. This is all very clear and stands out well so that everyone can read the on screen text without struggling; the colour of text complements the background colour. If you fancy a change of background scenery though, you can alter your wallpaper (you’re given a Trophy for doing so six times too) to something more to your liking, such as a mountain glacier or a Japanese scene, which again are complemented by a soothing music score. For some though, not having the original SingStar background may detract from the fun somewhat, as you miss out on the atmosphere the standard wallpaper gives you through its vibrant colours and suitable musical score.

In order to increase your familiarity with Guitar, there is a welcoming background score that reflects the majority of music that you will be singing along to; rock music. So you’ll hear a tune that is made up of guitar riffs and melodies, which is set at an appropriate level as not to ruin the overall experience of navigation. Something that you may not enjoy is that the voice navigation is still not fully functional and quite obstructive but it is an optional function, replacing your beloved DualShock will take more than that.

For the most part, SingStar benefits from a High Definition (HD) revamp as the menus are crystal clear, as are the modern music videos which too benefit from this graphical boost. Those that prefer older songs to feel nostalgic will notice that videos from SingStar’s oldest catalogue, in comparison to ones that were released just prior to HD, don’t seem to benefit from this update and their quality is lacking. This can be forgiven though, as some of the videos do date back to the eighties (and beyond) and you’ll be too busy signing or laughing at others attempting to sing, to bother with how good the videos look on screen.

As expected, in line with the other SingStar titles relaesed, Guitar holds the best singing and voice detection mechanic this generation, beating rivals such as GH and Rock Band. When playing on easy, as most of you will, you never feel as if you’re scoring too high as there’s always a few notes there that you won’t easily hit despite being on the lowest setting, neither will you feel that you’re being punished too harshly. It has a very nicely balanced difficulty setup and when playing in a group, there will rarely be an in-house singing champion as everyone will find specific tracks that suit them better than others. Such is one of the very few problems that SingStar has; some songs are just not suitable to be played even if you are just having a mess around, not taking things seriously. Although not on the disc, tracks such as The Frog Chorus by Paul McCartney are far too deep for many to be able to replicate and this makes the experience of singing these a chore. Fortunately, the track list on the disc is very good and the vast majority are easy for beginners to sing along to.

A returning feature is that rap scoring can be turned on or off before songs that involve said rapping, which many will opt out of, but those that are brave and/or stupid will have it switched on. Whilst on, it’s hard to see how you are scored on these sections as there’s no bar to detect if you’re in tune or not, just pop-ups at the side saying ‘good’ and ‘ok’ which may leave people feeling a little unaware of how well they are doing and how the next section is intended to be spoken. This is only something that you will encounter on songs you wish to download or import, so it’s no big issue with any of the tunes that make up the original track list.

One new feature, and Guitar’s key selling point, is the fact that guitar play is supported here compared to other SingStar titles. So, whilst wailing along with Stereophonics, you can also make onlookers wince furthermore by attempting to play along with your guitar too. Don’t expect any Guitar Hero-esque play though, this is a watered down version of the plastic instrument franchise. You can use any sort of guitar you have that’s compatible with the PlayStation 3, and you then match your fret buttons to the notes on the highway on screen and strum them in time. Don’t worry about multiplying streaks or star power; it’s just simple strumming along fun which enhances its appeal to a broad audience. Things do get hectic on screen with the note highway for your guitar and your note tracking, so it’s a bit hard to keep abreast of what’s going on at all times. Set-up though is very quick, easy and most importantly, fun which surely is the core aspect of the game

Remember those days of playing Eye Toy with the camera and then how soon the novelty of it wore off and you fell out with it? Well prepare to fall in love with console compatible cameras again, as Sony has implemented the PS Eye into SingStar: Guitar via videoing and photographing you throughout each song. These can then be saved and viewed all over again, making comedy gold for the most part as you watch yourself bobbing along to your favourite tunes. You can now also take pictures to go along with your new high scores you accomplish on the leader boards locally, allowing you to have bragging rights within the family of being the best at singing along to The Veronicas for example.

It’d be wrong to say that SingStar has limited appeal. It’s a party game and not intended for solo play, however with friends it is a game that you can return to over and over again. Considering that you now have the option to play with a guitar, you’ll find yourself a hard task sourcing a party game that can beat SingStar: Guitar’s appeal and enjoyment factor. Equally adding to appeal is the wealth of game modes and tracks at your disposal, so you’ll never be short of combinations to choose from. A very handy feature that has been added to the recent offerings in the franchise is backwards compatibility with older titles from PS2, meaning you can chop and change discs without ever having to reset the game and allows playing to take place quickly, something that is reflected throughout the entire game. With a constant stream of new content via DLC, it’s hard to see how you’ll ever grow bored.

Whilst SingStar: Guitar is fun and enjoyable, unless you’re a die-hard fan of the series, or a newcomer for that matter, you will probably just buy some more DLC from the SingStore to use with your current version of SingStar. Some will see this as a gimmick title as you can actually use a guitar with compatible songs from the SingStore with the 5.00 patch from the PlayStation Network. But for those wanting another game that will spice up a dying party, this will be a perfect addition to the collection.

The appeal of being a rockstar is spreading these days and even the gaming world is not safe from this trend. Sponging off the success from titles such as Rock Band and Guitar Hero, SingStar Guitar gives PS3 owners free licence to get their guitars (real or otherwise) out and rock their socks off. The song list is a bit mixed and there are the usual thoughts that this latest installment could have been released as DLC via the PSN, but there's no denying its appeal.